← The Inspiration for the Segregation
Stranded on Thin Ice → 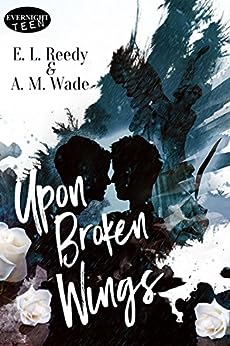 Upon Broken Wings by E.L. Reedy and A. M. Wade is not a light read, but it is a read worth your time. This dark, cathartic story is a unique meld of many genres; coming of age, gay positivity, and family all interwoven with religious flavor, life after death, angels and demons. Reedy takes us on a journey through a small, overly conservative community all the way to Purgatory in a way that makes sense. If the story has any weak points it can all be forgiven by the enthralling premise of the novel.

The story follows several boys at the verge of of adulthood; Andrew, who suffers from Aspergers, and Keenan, a brave gay boy who is coming to terms with his identity. A series of unfortunate events will lead to a gruesome assault that will require all the strength of their family and friends, dead or alive, to help them resolve.

Upon Broken Wings avoids obvious descriptions of the worst that the characters have to go through but the indication is enough to leave me seething and demanding justice. Add to it is the slow burn of sadness, loneliness and isolation that the characters feel, all the misfortune and all the lost chances add up to a dark and emotionally heavy reading experience. Reedy takes us through mud so we could feel all the anguish that made his characters behave the way they do. So when he finally, mercifully, starts to get us into a somewhat better place we feel like we earned it.

His characters are the best part of the story. They feel like real people and their motivations seem genuine, even when they are no longer among the living. And that’s a tall order with all the elements or death, gay identity and angels in it.

I felt that the dialogue was disjointed and the characters, especially young Casey, sometimes feel like intentional Mary Sues. Casey, Keenan’s brother, is a boy wise beyond his years and can also see angels. We are never given a reason for this ability. It serves the story and paints an emotional picture but I felt that it lacks depth. Similarly, Andrew’s Asperger is important for the story but we never see how it affects him in his day to day life. We are told but we are not really shown the consequences of living on a spectrum. I think this would have helped flesh out the characters.

The angels give a distinct New Age vibe. Their shallow philosophy of forgiveness and understanding along with healing crystals and other cliches works well because angels should behave like that, which gives this coming-of-age and coming-out story interesting and unexpected religious undertones. Upon Broken Wings is not a perfect story. But it is an interesting and original endeavor in this day and age that is. A rare novel, certainly worth your time.

← The Inspiration for the Segregation
Stranded on Thin Ice →