← Resilient and Courageous
Do The Inner Work → 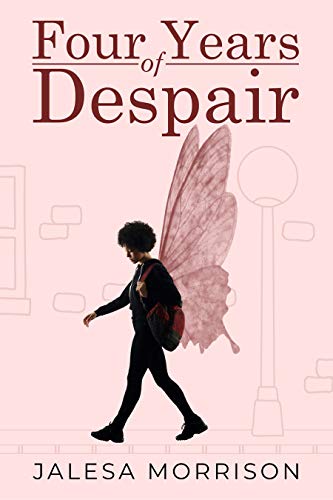 Four Years of Despair by Jalesa Morrison is a youth/teenage story that touches upon sensitive topics, such as mental health, bullying, and family issues. Jaunell Morris is a teenage girl that doesn’t fit in at school or at home, and has a lot of issues. She has trouble communicating with her family, her teachers and with making friends. Everyone around her is baffled by her outbursts and her violent episodes. Her school gives up on her and she is transferred to a different school, where things get even worse.

Jaunell is diagnosed with bipolar disorder, and she is in and out of hospitals all the time. Her situation is made worse by her parents’ bad marriage, her poor relationship with her older sisters and the rejection she feels from her extended family. Her only ally is her grandmother, and one of the nurses from the hospital where she’s treated. Eventually, the nurse is the one that helps her secure a place at a much better mental health treatment facility. These are heavy emotional issues, but the book ends on a hopeful note.

This book has the courage to shed light on a lot of difficult issues: mental health in teenagers, dysfunctional families, poverty, lack of access to proper education, social services and healthcare. It’s an authentic and powerful radiography of our society and how its most vulnerable members (youth, minorities, poor people) have the cards stacked against them.

The devastation that mental health issues bring into a person’s life is depicted well inJaunell’s story. However, sometimes I felt that the insights into Jaunell’s motivations, actions and reactions are not detailed enough. The book would have benefited from a deeper incursion into the complexities of Jaunell’s mental issues. I would’ve also liked to have read more about Jaunell’s mother and her relationship with her grandmother. The details of their relationship could’ve provided more insight on the family dynamics and how it affected Jaunell.

As someone who has experienced living with a person who is bipolar I would definitely recommend reading Four Year of Despair by Jalesa Morrison as this book is a real eye opener as to what people who are diagnosed with bipolar disorder go through in their day to day activities. This book would be a great influence to teens who are going through this but may be confused as to why they handle their emotions different than others.

← Resilient and Courageous
Do The Inner Work →