Mr. Wonderful is a touching story that follows Brian, a college professor, in the throes of a life crisis like none he has ever faced. What was the initial idea behind this story and how did that transform as you were writing the novel?

Initial idea behind the story: MR. WONDERFUL began as a memoir. I was a college professor and my father has recently passed with advanced dementia. I don’t have a ‘loopy son’ as in the book but I do have a son about that age and know many other millennials who behave a bit like Danny in the novel. But as I got into the writing of my memoir, I realized I wanted and needed the freedom to invent–a lot. A fictional story came into view about a professor’s world sort of closing in all around him and I decided to let my memoir morph into a novel and let it take me–and readers–into some unexpected but hopefully moving and memorable places.

What I liked about Brian was that his character was layered and his emotions were relateable. What were the driving ideals behind his characters development throughout the story?

Brian, like me, is flawed but, hopefully, someone readers would root for. So I focused on telling a story in which Brian’s world is full of conflict; in sorting out competing desires (he loves his son but realizes he needs some tough love, etc.) we often learn the most revealing things about ourselves. Good, rich, layered characters need inner problems–as well as outer conflicts–to resolve and overcome and that’s what I worked to create for Brian (and for Danny, for that matter). The driving ideal or goal for the characters, especially Brian, was how do I succeed as a respectable man in the world? How do I make the most of my time in this world? Can I/will I live a life as admirable and eventful as Brian’s father, ‘Doc’ Fenton?

I felt like all the characters in the novel were well thought out and developed. What were the morals you were trying to capture while creating your characters?

I’m not sure I was intent on capturing any particular set of ‘morals’ with these characters except perhaps to showcase them working to figure out how they can learn to care as much about others (at least in their family) as they do about themselves.

I’ve recently begun a bit of a sequel to MR. WONDERFUL, focusing on the ‘next generation’ of the Fentons story: that of Danny and Dawn out on the road trying to reinvent themselves as ‘respectable’ people while still living the free-wheeling lifestyle that is so central to their identities. Probably won’t be done until early 2019. I’m also working on finding financing for my next major feature film, BLOOD BORN, about a young man who’s world is turned upside down when he discovers that his blood can cure cancer. My first feature film, TEXAS HEART, starring John Savage (THE DEER HUNTER) and Lin Shaye (INSIDIOUS), is now available on Amazon Prime and on DVD. Very proud of that film. 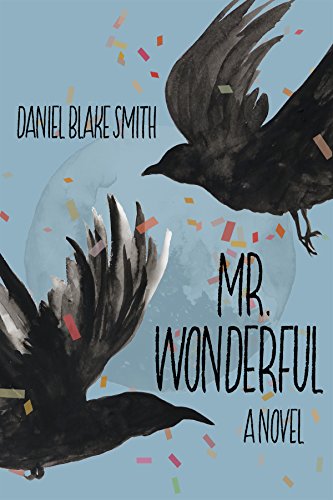 In spite of the world’s struggle and sorrow, life sometimes shows us the wonderful.

Brian Fenton’s life is falling apart. A professor at a bankrupt “directional school,” Brian suddenly learns he must either take early retirement or double his workload. As he confronts the embarrassment of his job going south, Brian discovers that his loopy son, Danny, is paying a surprise visit—which can only mean a hand out for money and a need to crash. To top it all off, Brian is fielding frantic calls about his aging father who’s declining rapidly with dementia.

Once a family doctor in Juniper, the small Texas town where Brian was raised, “Doc Fenton” is going down fast—forcefully reminding Brian of his own mortality and the painful issues separating him from his domineering father—a man only his loving wife could call “Mr. Wonderful.”

When Brian’s father passes, the gathered Fenton family partakes in a volatile small-town Texas funeral—at once hilarious and poignant—which produces startling revelations about Doc Fenton that propel Brian and the whole family into a new direction, a new path forward.

In the engaging vein of Ann Patchett’s Commonwealth and Jonathan Tropper’s This Is Where I Leave You, Daniel Blake Smith’s debut novel is at once a comic and heart-wrenching family saga. It offers a piercingly honest window into how we struggle to make sense of ourselves, our families, and our life purpose. If we’re lucky, we discover Mr. Wonderful.