As Judge Neeson holds a party with well-established millionaires, other judges, and famous revelers, his judge’s judicial assistant is said to have been tasked with meeting someone claiming to carry incriminating files on him. The following day the assistant finds the judge’s house vacant with only Neeson’s dead body left on the floor. Head bashed in and body assaulted beyond belief, Detective Chief Inspector Sheehan is put to the task of solving the murder of Judge Neeson.

Over the following weeks, Sheehan discovers that they are dealing with a provenly deranged serial killer as more bodies are uncovered. And as fate would have it, each murder is documented and justified by the killer on a blog posted to the Dark Web called “Niemen,” which launched the same day Judge Neeson was discovered. Each post proceeds with decoding the meaning of old philosophies surrounding vigilante work and justice of the people and the fate of the victim the author decided to unleash these philosophies on.

Author Brian O’Hare’s gripping book The Dark Web Murders is filled with impressive realism and has been well researched. Rarely seen these days in a lot of fictional crime, the attention to detail truly makes this enthralling book stand out against the crowd. Using a slow-burn approach, the author introduces small details about the setting and crime scenes to the reader. This attention to detail continues throughout, creating a complex plotline. In the style of a hard-boiled mystery, O’Hare gives extensive and often gruesome details to his murder scenes. This reminded me of Dan Brown’s works, which would leave readers with no doubt about the suffering the victims endured.

One characteristic that makes this unique novel stand out is the character development. Each character is distinct and memorable. The side characters are lovable and realistic, giving readers someone to relate to as they progress through some of the darker moments. The crimes have a poetic justice feel to them with the killer’s use of philosophical ideas that presents a calculated series of killings.

The Dark Web Murders is a riveting crime thriller that will have readers on edge till the end. The mystery behind the murders is engrossing as clues will lead readers down false trails and keep them guessing until the reveal.

The Doom Murders follows Inspector Sheehan as he pieces together clues from a string of murders connected to the church. What was the inspiration for the setup to this thrilling story?

I was reading a book about mediaeval art and came across a fifteenth century painting of The Last Judgement by Rogier van der Weyden. One segment of the painting showed the lost souls being tossed into the pit, their bodies twisted into grotesque shapes as they were falling. I suddenly visualised a situation in which a detective comes across a series of killings where each dead body is twisted into one of these shapes. What would have caused the killer to do that? This thought led to the writing of The Doom Murders.

Sheehan is an interesting and well developed character. What were some driving ideals behind his character development?

Many years ago, before I moved into management myself, I used to lecture on Organisation Theory and The Psychology of Management. I was particularly convinced that the best manager, one who could motivate staff, was one who operated from a human-relations approach. He would have no ego. He would be concerned for his workers’ feelings, and would respect them enough to consult with them about how the organisation should be run. Sheehan’s character came out of this kind of thinking. He can be still grumpy and there is no doubt that he is the boss, but he never acts in a way that would create animosity or cause bad feelings.

The motive behind the killings, and the killer, were apparent to me from the beginning. The ‘fundamentalist’ element stemmed from experiences I have had with people of extreme religious conviction who constantly criticize other people’s ways of life without ever considering their own darkness. What did emerge organically were the biblical clues that were found at each crime scene. Actually, they were not there in the early draft. I had to go back and write those extra clues in, because I felt that the story didn’t have enough of the bizarre to go along with the underpinning concept of The Last Judgement and the psychotic nature of the killings. Similarly with the victims. … I had no idea who would be murdered next. Each victim was created only as I needed another high-profile representative of some significant stratum of society that my killer could set his sights on.

The Doom Murders is the first volume of an award-winning series called The Inspector Sheehan Mysteries. There are four other volumes, three of them already published. The last one is currently going through the editing process with my publisher. This latest book is called The Trafficking Murders and it should be published in the late Autumn of 2020. Details of the other volumes, The 11.05 Murders, The Coven Murders, and The Dark Web Murders, can be found on my Amazon Author Page [link below]. And maybe I should mention that The Dark Web Murders, [which, like each of the other volumes, has won The New Apple Literary Award for excellence] has almost 500 ratings on Goodreads (average 4.5 stars.) 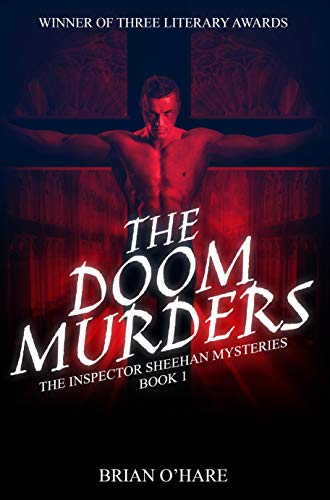