As Judge Neeson holds a party with well-established millionaires, other judges, and famous revelers, his judge’s judicial assistant is said to have been tasked with meeting someone claiming to carry incriminating files on him. The following day the assistant finds the judge’s house vacant with only Neeson’s dead body left on the floor. Head bashed in and body assaulted beyond belief, Detective Chief Inspector Sheehan is put to the task of solving the murder of Judge Neeson.

Over the following weeks, Sheehan discovers that they are dealing with a provenly deranged serial killer as more bodies are uncovered. And as fate would have it, each murder is documented and justified by the killer on a blog posted to the Dark Web called “Niemen,” which launched the same day Judge Neeson was discovered. Each post proceeds with decoding the meaning of old philosophies surrounding vigilante work and justice of the people and the fate of the victim the author decided to unleash these philosophies on.

Author Brian O’Hare’s gripping book The Dark Web Murders is filled with impressive realism and has been well researched. Rarely seen these days in a lot of fictional crime, the attention to detail truly makes this enthralling book stand out against the crowd. Using a slow-burn approach, the author introduces small details about the setting and crime scenes to the reader. This attention to detail continues throughout, creating a complex plotline. In the style of a hard-boiled mystery, O’Hare gives extensive and often gruesome details to his murder scenes. This reminded me of Dan Brown’s works, which would leave readers with no doubt about the suffering the victims endured.

One characteristic that makes this unique novel stand out is the character development. Each character is distinct and memorable. The side characters are lovable and realistic, giving readers someone to relate to as they progress through some of the darker moments. The crimes have a poetic justice feel to them with the killer’s use of philosophical ideas that presents a calculated series of killings.

The Dark Web Murders is a riveting crime thriller that will have readers on edge till the end. The mystery behind the murders is engrossing as clues will lead readers down false trails and keep them guessing until the reveal. 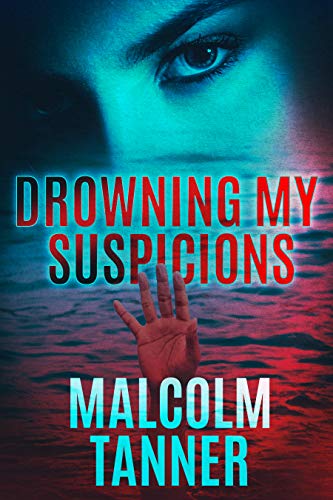 Drowning My Suspicions by Malcolm Tanner is a captivating story of Braden McDermott, a well-established sports broadcaster and close friend of Larry Mattingly, an investigative reporter. Larry narrates his journey to investigate his friend’s death, which he believes was not justly resolved by the law. The story is action-packed and moves smoothly between an ongoing court case and the series of events leading up to the trial in a succession of flashbacks. As Larry delves into his friend’s acquaintances and connections stemming from Arial Kramer, an ex-girlfriend, he follows a path of deceit and crime that stems over several years, leading up to Braden’s unfortunate fate.

Malcolm Tanner writes with an exciting, fast-paced tale that keeps you engaged immediately from the beginning. The story quickly shifts into past events tied to the court testimonies and witness accounts, focusing on specific individuals and their connections to the case. The author leads the reader into layers of circumstances and events surrounding Braden, Larry, Arial, and a few key players in the story. This process creates an atmosphere of mystery about the death and how what appears to be a straightforward story is far more complex. As new events and developments occur, new characters and situations emerge, drawing the reader deeper as the story digs far below the plot’s surface.

The author steadily builds momentum, along with unexpected twists, holding the reader’s attention until the end. Larry’s investigation takes in a lot more as the story moves to include peripheral characters and instances that weave into a much larger role in the plot. He is a likable character with a keen eye for finding justice with an unrelenting nature. Each chapter is short and concise but descriptive enough to keep you moving forward without pause. It’s an addictive read that ignites a sense of getting to the bottom of the case. I felt that longing to solve the mystery like a jigsaw puzzle that continues to grow, adding more pieces along the journey.

Don’t judge a book by its cover–or its title either. ‘The Cowboy’ immediately makes me think of a Western, but it is most definitely not. Manuel A. Melendez weaves a frightening tale. He brings to life a shadowy character known as The Cowboy who is killing nurses and doctors. Detectives Jon Delgado and Bill Crocitto realize there is a link between the victims. They must solve the case and get The Cowboy off the streets. Initially they only have the word of a drunk who says he knows who The Cowboy is. More clues start to lead to the Cowboy, that’s when things start getting really interesting.

This story is set in New York, I felt like I didn’t get a proper sense of the setting itself, but that didn’t detract from the book because this was all about the characters for me. The Cowboy is a frightening character, a true bogeyman. Initially, when we read a little about his background and how he was breathed into life, I had some sympathy for him, for everything he had to go through. As we learn more about his upbringing, the reasons he kills doctors and nurses, I gave some thought to the nature/nurture theme. I know which side of the fence I fall on with that debate, but the author did a superb job of making me think.

The two detectives were, in some ways, portrayed as a comedy duo, but they had a serious side. I loved the relationship they had with each other, seeing how they balanced each other out. Sometimes I felt the outcome of their arguments with their superior was a little contrived but overall it didn’t detract from my enjoyment of the book.

The last character was Rebecca. Her description and how she deals with The Cowboy made me think of the phrase ‘though she be but little she is fierce’. That I think is an appropriate description of Rebecca. She was my favorite character, perhaps because I’d like to think I’d behave as she does in the face of fear.

The Cowboy is riveting hard-boiled mystery with a haunting antagonist. If you’re looking for a Western, this isn’t the book for you. If you want something gritty, with a blood-curdling crime, then don’t wait. Pick this up today.

Billy has only ever wanted to liberate the oppressed. He worked as a cop for ten years only to leave that behind and join the priesthood. About half a decade since he left the force and last spoke to his ‘brother’, he is called upon to help with the murder of his goddaughter Julia. He can feel the heavy presence of the devil in Capitol Hill Denver. He is determined to fight with prayer. William Yeats Butler is no weak person. He is a worthy opponent. He is a warrior. Will the killers of Julia be brought to justice? Can Billy and Laskey ever get overcome the past?

Set in the 1980’s this book is the first in a two book series. It’s an account of suspenseful mysteries with a bit of a narrative on spirituality weaved in. Written by a cop, you really can feel the intensity of a police investigation. The pain of knowing the victims on a personal level. The valor required just to get out of bed each day and prepare for this job. One can also clearly see the sheer sacrifice that comes with the job. Timony McKeever is a brilliant storyteller who has mastered the art of setting the scene using simple language.

There are so many characters to love. Moving away from the obvious, Billy, one cannot help but admire the double edged sword that is McDuff. MLM can be tough and mean but she can also be sweet and charming. It is so strange yet so compelling to experience. Laskey on the other hand is a faulty human being. He is great at his job and has better fashion sense now but the cracks in his personality make for some comedic relief. The author, it seems, has developed each character for the sole reason of building a rapport with the reader. To invite the reader into Capitol Hill as opposed to just watching events unfold from the sidelines.

The prose is succinct, and the dialogue is engaging because things are kept short. It is especially fun to see Laskey and Billy fall into their old relations so quick after they are reunited.

Be warned, there is quite a bit of profanity. However, it serves to set the tone of the book and is yet another thing that paints an accurate picture of interactions between brothers in arms. This is a book worth reading. If nothing else you will appreciate what it takes for criminals to be brought to justice.