The Secrets of all Secrets follows Zane who receives a USB from a stranger that contains a message that promises the Secret of All Secrets. What was the inspiration for the setup to this fun novel?

I wanted the premise of the story to be wacky and like a fairy tale with epistemological overtones. Many of us grew up with fairy tales of one sort or another, so the concept is recognizable. The USB is Jack’s bean stalk. Once it’s there, he has to climb it. The USB idea occurred to me because I use them in my work as a college professor. I wondered what would happen if all knowledge, the meaning of life, etc. were on one? The next question: What parties would want to pursue The Secrets and to what lengths will they go to get them?

In this story you combine irony with wry humor and manage to keep it all topical. What themes did you want to explore when you started this book?

The overarching theme is illustrated by Shakespeare’s line from The Tempest: “The stuff that dreams are made on,” which is what The Secrets represent. What would be the government’s dream for getting The Secrets? Probably something to do with gaining ultimate power. Corporate America’s dream? Wasn’t there someone who said there’s no such thing as making too much money? The two crazy extremists’ dream is to create an Anti-Amerika, “Amerika with a k.” That the representatives of these entities are comical bunglers illustrates the way in which human beings can wreck any mission. As for the two main characters, Zane and Dali—Everyman and Everywoman—the dream is more about self discovery. It’s a classic conflict: individuals versus institutions and malevolent factions. Jack versus the Giant.

Zane and Dali are both enthralling characters. How did you set about creating their dynamic relationship?

What’s kind of funny is that when I started the novel, there was no Dali. Once I got to the point in the story where Zane begins his quest, I knew he needed a partner, someone equally smart, resilient, and resourceful but with a different sensibility. Zane is an intellectual. Dali is more pragmatic. There is tension between them, but there’s also balance. “Two peas in a pod,” as is stated ironically early in the book. It doesn’t hurt that they are attracted to each from the start without admitting it to themselves.

I’m working on a satire of political correctness. I’m hoping to finish it and have it published in a year or two. Some of this is dictated by my teaching schedule, but if you know any publishers willing to give me a triple figure advance, I think I could work a little faster. 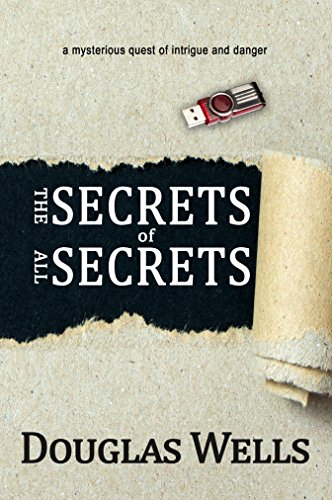 Zane, a seminary and grad school dropout, obtains a USB drive left by a cloaked figure on a bridge in the middle of the night. The drive’s content offers Zane “The Secrets of All Secrets”—a tantalizing proposal for someone who has nothing left to lose.

Following the drive’s directions, Zane heads to Florida where he encounters Dali, a poor waitress who received an identical USB. Initially clashing, they band together, taking a chance that The Secrets are genuine as they receive more instructions from their USBs.

Four conflicted government operatives; an extremely tall corporate executive with an extremely short, scholarly hit man in tow; and two crackbrained, fringe-element, anti-government separatists are after The Secrets—and are all willing to kill to get them.

Zane, Dali, and their pursuers encounter an armadillo festival, visit a nudist resort, and hang out with a presumed dead ’60s rocker. Pandemonium occurs at each venue with Zane and Dali one step ahead of everyone… that is, until all parties convene for a climactic confrontation over The Secrets.