In the Shadow of the Hanging Tree takes place in the 1860s and follows the lives of three people trying to find their way in post-Civil War America. What was the inspiration for your characters; the Henry the ex-slave, Clara and lieutenant Elliot?

I have always been an omnivorous reader. From horror to historical and most genres in-between. The American western is genre that seems to have sort of faded into obscurity over the last thirty years or so. I suppose I can understand why. A lot (not all) of it had become dusty, formulaic, trope-worn, overly-romanticized, and historically inaccurate. I set out to write a story set somewhere between the gold rush and the turn-of-the-century. Something with a different kind of hero from the gunfighter or bank robber. Something that would dust off the genre, add some real humanity, and hopefully spark some renewed interest in this fascinating and sometimes troubling time period.

Henry as the main protagonist was an easy choice. I read a short once, about a man who was freed after the civil war and went on to become a well-known cowboy in Texas. The man had a remarkable way with horses. He was the inspiration for Henry. The challenges African Americans faced even after they were freed from slavery were monumental, and so many extraordinary men and women overcame this adversity and went on to live noteworthy lives.

With Clara I wanted to highlight challenges that women of the period faced. Their oppression can’t be compared equally to African American’s enslavement, but neither can it be marginalized. I also used her character to showcase the disconnect between wealthy easterners and the reality of what was going on in the rest of the country.

John Elliot’s inner conflict wasn’t that uncommon for soldiers both during the civil war and the years following. I have read truly heartbreaking letters sent home disillusioned soldiers from the period, particularly ones from soldier’s involved in what could arguably be called the Native American genocide.

This novel gave a good view of life in 1860s America for slaves and Native Americans. What were some themes you tried to highlight throughout this novel?

Mostly that things aren’t always as black and white as we have a tendency to make them out to be. The world is made up of a lot of greys, and the difference between right and wrong isn’t always easy to see. We live every day with prejudices we’re blind to and sometimes it takes extreme circumstances for us to even realize it.

Henry and Clara’s relationship is touching but anchored with fear and a desire to find their way to the right side of things. What served as the basis for their relationship while you were writing?

Henry and Clara’s relationship is one of self-discovery for both of them. Henry begins to forgive himself, and finds that he is still capable of love. Clara discovers that her prejudices were misinformed. Her interactions with Henry, and his honesty, later affects how she later handles John’s disturbing revelations.

I have two novels in the works. One is a contemporary drama about a twelve-year-old whose parents both die tragically less than two years apart. He’s subsequently injected into the foster care system and eventually runs away hoping to find an estranged grandparent who lives off-the-grid in Montana. The second is about a man searching for his daughter years after a global catastrophe. Both novels should be released in 2019. 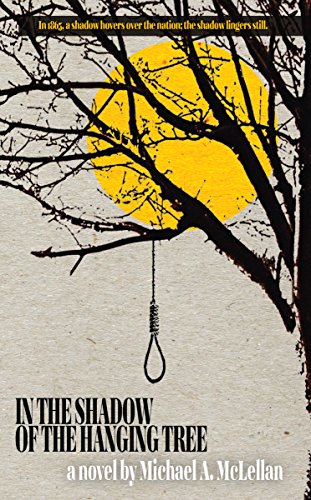 In 1865 a shadow hovers over the nation: the shadow lingers still…

Born into slavery, Henry’s young life is spent working in tobacco drying sheds on Missouri plantations. Freed at the onset of the Civil War, he’s alone, starving, and on the run from Confederate militiamen.

Five years later, Clara Hanfield, the daughter of a powerful New York shipping magnate, escapes her tyrannical father and travels west in pursuit of John Elliot, the man she loves. John, a U.S. Army lieutenant, was sent to the Dakota Territory where he discovers a government conspiracy to incite an all-out war with the Indians; a war meant to finally eliminate them as an obstacle to the westward expansion.

Henry finds himself caught in the middle.

Aided by Clara, John, and his native ally, Standing Elk, Henry must battle hatred, greed, and the ghosts of his past during this turbulent and troubling time in American history.