The Story I Should Tell

Tales From The Mud Hole, Why Pigs Are My Friends is an inspiring and light-hearted memoir that shares your personal story and what you learned as a hog farmer. Why was this an important book for you to write?

I think most of us have felt at some point in our lives the desire, or the inspiration, to act on the creative instinct that we can feel now and then. This creative desire can motivate us to develop talent…be it writing, music, art….or designing a highly complex machine. For me, I felt the regular nudge telling me that I needed to write and exercise this tiny bit of talent I had been given. I eventually understood that if I failed to act on this inspiration, then it would gradually become only a daydream, played out in my mind with a twinge of regret.

Since I hate regrets, I decided to write a book…or at least try and since my experience with the hog farm was still fresh in my mind, and had made an impression on my young life, It seemed that this was the story I should tell.

What do you think is the most valuable lesson you learned as a hog farmer?

Even during difficult or trying times, we can have those moments when a beautiful window of sunlight breaks through the clouds and shines right where we are standing. Unless we are paying some attention, we can easily miss those bright moments when they arrive. .

What were some ideas that were important for you to share in this book?

That all of God’s creatures have beauty.

What do you hope is one thing readers take away from your book?

I love a well-told story. I’ve encountered many in my life. I hope in some small way, to have helped someone enjoy a story that perhaps that hadn’t entirely anticipated.

The Hidden Gifts within the Trauma of Sexual Abuse

The Hidden Gifts Within the Trauma of Sexual Abuse by Keira Poulsen is a non-fiction book intended to help victims of sexual abuse find a path to cope with their pain and provide healing through faith for the trauma they have suffered. Written by a survivor of sexual abuse, this book is a combination of self-help book and journal, with the author speaking directly to the reader and asking them to answer questions about their own personal experiences and feelings. The author shares her own story of abuse and the ongoing effects it has had on her through the rest of her childhood and into adulthood.

This book has an inspiring message of hope that can aid survivors of sexual abuse. Although readers may find many parts of it difficult to read, this book shines a much needed light on this pervasive issue in our society. It is aimed at helping those who have suffered through this specific trauma, but the principles outlined in the book can be beneficial for anyone who has suffered pain and trauma of any kind. I liked the author’s encouraging words and support of others. This book will resonate especially strongly with readers of faith due to the author’s inclusion of verses of scripture that were helpful through her own personal journey of healing.

There are several journal questions at the end of each chapter that can provide insight and guidance to gain strength and hope, if readers truly look inside themselves to answer honestly. I liked that the book provides lined blank pages to write on, rather than just a list of questions to consider, which are often merely skimmed over by readers. There were a few minor editing issues in the book. And I didn’t agree with the author’s assertion that there can be no joy without pain, however, suffering through pain often can make people appreciate more the good things in their lives.

I found The Hidden Gifts Within the Trauma of Sexual Abuse to be inspirational, uplifting and empowering. More inspiration can be found in the author’s next book, Warriors of Light: Stories of Hope and Healing from Survivors of Sexual Abuse, and I liked that a short excerpt was provided at the end of this book. 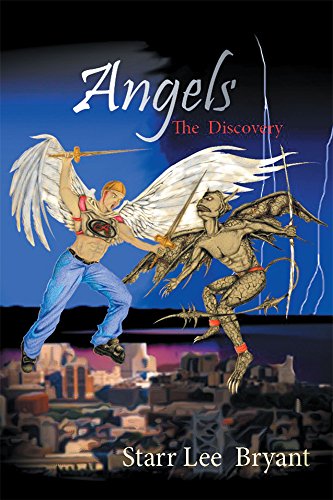 Angels: The Discovery, by Starr Lee Bryant, is the touching and sometimes harrowing tale of one boy’s ascent to Heaven. As young Fraser awakens in an unfamiliar and empty room, he struggles to remember how he arrived there and why he feels simultaneously at peace and full of an unexplained energy. Fraser becomes acquainted with several other young people in the same boat. Soon enough, he and the others are oriented to their surroundings, briefed on the details of their arrival in Heaven, and allowed to choose jobs within the kingdom–except Fraser. Even amidst the serenity, Fraser finds himself fighting to understand his true place and purpose among the other angels.

I was immediately struck by Bryant’s depiction of Fraser’s first moments in Heaven. He is overwhelmed but, at the same time, curious and calm. His surroundings are described in the most vivid and tangible details. The reader shares the main character’s peaceful and comforting sensation as he/she enters the first chapter. Bryant spends a great deal of time illustrating the pristine and comfortable quarters to which Fraser is oriented by Gabrielle, his assigned guide.

Bryant uses her cast of characters to emphasize two major aspects of Heaven. She has created Fraser in order to show readers the freedom from pain and suffering found in Heaven and to underscore the fact that those who make it to Heaven are, indeed, believers of God (The Big Guy). I was moved by the flashbacks Fraser experiences with increasing intensity and clarity. As he begins to learn more about the way he reached Heaven, he sees scenes from his life on Earth in a new way–a way he never would have been capable of as a mortal. Each of Bryant’s characters contributes to the plot in a unique way. I am quite partial to Ms. Jamerson, Fraser’s orientation instructor. She’s unflappable and more than willing to provide detailed explanations to Heaven’s newest residents.

One of the most unique aspects of Bryant’s depiction of Heaven centers on the angels’ relationships with their loved ones. The grieving process is very much an earthly sensitivity. Fraser learns quickly that, though he still loves the family he left behind, his feelings toward them will be much less sad, and the expected pining for their companionship and closeness is a not an emotion with which he will battle.

As beautiful and as perfect as Heaven and the angels are drawn in Bryant’s work, her narrative regarding the dark angels is breathtakingly disturbing. The author draws chills from the reader with Fraser’s first encounter with the dark angel hovering above his family. Bryant goes on to describe amazing scenes in which the dark angels seem to be silently dominating life on Earth.

Angels: The Discovery, by Starr Lee Bryant, deserves every one of the 5 stars I am giving it. Bryant provides a thought-provoking account of life after a hero’s death for believers in Christ. I found Fraser’s “choice” of job as both fitting for him and a wonderful tie-in to his concern for his family’s welfare after his death. In addition, Bryant leaves the door wide open for a stirring sequel featuring young Fraser.