Free Love and the Sexual Revolution: Finding Yourself by Removing Sexual Boundaries

I feel liberated just reading this book! I was totally caught by surprise by how much I loved this book. Any preconceived notions I had about this type of living situation were quickly dispelled by this beautifully written memoir about one woman’s life as the owner of a free love nudist community in California. She walks the reader through her early life, youth, and young adulthood and how this former top insurance salesperson and her aerospace engineer husband ended up running this alternative commune.

This community is located in Topanga Canyon, CA and is not hard to find on the internet and other sources like books, TV and even movies. She describes the community and property beautifully as being “nestled like a gentle Buddha in the wooded tangle of Topanga Canyon” and it made me instantly want to go there. The way she describes life with this free love family both answered questions and created more curiosity in me.  The star struck silly girl in me wants to know all the celebrities who went there, as the author mentions.

I love that she included essays by many of the former family members who shared their experiences at Sandstone. It seems like so many people felt transformed by their ability to be so open and free among this community of free thinkers and people who did not want to be weighed down by jealousy or judgment. I love that they promoted their lifestyle and had workshops and publications. These were people who were not just flippantly promiscuous or polyamorous. They lived this lifestyle with intention and the desire to live in a conscious way outside of what was forced on them by society.

The author shares openly about her life story which is somewhat sad in her early years, but she maintains such a positive and mindful attitude that it is inspiring to read. I am so impressed by how she ran with who she is and what she believed in. I find this awe inspiring and this book got me thinking about the things about which I am passionate. She also shares so much about her time running a cat rescue and you can really experience her love for these animals in her loving descriptions about these creatures.

This was not a smutty or perverse book, as some might assume, far from it. This work of non-fiction about the Sandstone Retreat paints this community with a beautiful brush. It was not some swinger club or sex club but a group of like-minded individuals who came together and chose to live in pure openness and honesty. This magically led to an amazing experience for so many people and never morphed into anything ugly or tragic. Awesome! I thoroughly enjoyed this book!

The Secrets of All Secrets 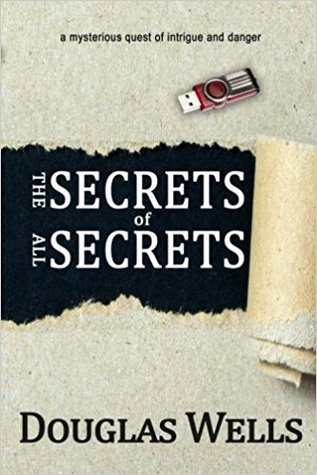 Douglas Wells’, debut novel, The Secrets of all Secrets begins with a mysterious stranger, who issues a fateful quest. The reader follows Zane, a graduate school and seminary drop-out, who receives a USB from the stranger. The USB contains a message that promises the Secret of All Secrets and he is pressed to go find out how far the rabbit hole goes. He soon meets a waitress at a diner, named Dali, who received a similar USB. They initially butt heads, but they soon come together to figure out the mystery. They are dogged at every step by four conflicted government agents, who pursue them to the very end.

Wells combines smart, informed prose with fun, engaging dialogue to create an interesting story that hails the modern quest narrative, but also the old-fashioned road narrative calling to mind Jack Kerouac and others of that generation. There are plenty of moments where Zane calls back to his graduate school education with references to Pascal and Tolstoy, which do become a bit pandering to a point, but soon get lost in the action that ensues.

Zane and Dali are both enthralling characters, where Wells’ skill shines through and even shows up among the government agents who serve as the bulk of antagonism in the novel. The decent character portrayal also smoothes over the often-sparse description and scene setting that would normally keep the reader engaged, but the characters are able to do this on their own. The ideological lines that all the characters have seem to be commentary on our day to day lives, from government drones to Zane’s cynicism.

The setting of Northern Florida was an interesting choice and provides a unique setting rich in regional idiosyncrasies as well as clashing rural and coastal tendencies. Zane and Dali adventures are increasingly crazy and fit in with this setting choice. They venture into an armadillo festival, nudist resort and even find a presumed dead 60’s rocker. All of this combines to be a sort of satire of American politics and greed.

All in all, The Secrets of all Secrets will keep the reader’s attention until the very end with its light-hearted prose and topical social commentary. Wells blends the ironic with wry humor and never misses a point to push the absurdity of his tale a little farther, as if encouraging the reader to do the same.