What do the inscriptions really mean?

The Demon Mark follows a police inspector into a religious town that’s overrun by fear where a murder mystery hides dark secrets. How did you come up with the idea behind this novel?

The idea started with the historical research that I did for the novel. I was intrigued by the protective marks that were often placed on buildings and other structures to ward off evil, and that was the genesis of the idea behind The Demon Mark. What do the inscriptions really mean? What are the marks meant to do, and can they be turned to be used for evil purpose? These all the questions that ran through my mind as I began writing the novel.

This is book two in your Cormag MacLeod Police Inspector Series. What were some new ways you wanted to test Cormag in this book that was different from book one?

Macleod’s major test is dealing with his own past. He is a complex multilayered character, with so much guilt that he carries with him, effectively haunted by the past both in thoughts and visions. I wanted the challenge for him in this novel to be an agent for his own redemption, to forgive himself, and to be able to let go of the past so that he could begin living again.

I appreciated the well placed use of history throughout your story. Was this instrumental to your story or was this something that just fascinates you?

I have a connection in that my great grandmother ran an inn in the 1800s in the region.

What can readers expect in book three of your Cormag MacLeod Police Inspector Series?

Paterson’s Curse is the title of the new book, and it follows MacLeod as he investigates a series of murders in the nearby town of Paterson. Plenty of twists and turns in this one, a dark undercurrent of witchcraft, as Macleod battles his own demons as he races against time. This one will keep you guessing until the end.

Inspector Macleod isn’t one to shy away from unpleasantness or death. He has seen more than his fair share of both. But when a young man is murdered in the small village he’s recently settled into, Macleod is unprepared for the amount of religious fervor and superstition that swirls around the case, watching as the villagers drive themselves to the brink of a disastrous panic in the search for answers. Realizing that time is a factor, and that cooperation from the local police is not likely, Macleod has to connect the current events with a nearly decade old disappearance, and finds himself unearthing long buried town secrets along the way.

The Demon Mark by Saul Falconer is an intricately layered murder mystery centered by the deeply complex figure that is Cormag Macleod. Macleod is presented as a competent and imposing inspector, obviously flawed, but passionate about his work. As the book trudges on, small bits and pieces of his past are revealed, lending more depth and understanding to his mindset as the mystery builds around him. Despite the array of aspects that come together during throughout the story, nothing is ever convoluted; owing to skilled writing. Falconer finds a modest balance between intrigue and complexity and rarely failing to keep up the pace while weaving between them.

The beginning of the book provides the reader will all the past details of the village they would need to know, integral to the plot or not, this creates a well defined backdrop to the story. Once past that, the story moves at an incredible pace, twisting and turning to an explosive ending.

Falconer infuses a huge amount of history into this book as well, recreating the town of Dungog in detail and using historical figures of the time as supporting characters. Author’s notes further the historical accuracy of the setting and helps to make the area come to life as an integral part of the action.

Among all the mystery and secrets, the book explores the idea of doing the right thing the wrong way. When the big twist is eventually revealed, it is almost easy to sympathize with the antagonist, as solving this crime leads to the resolution of another. Moral and religious beliefs lay the foundation for nearly everything Macleod discovers.

I enjoyed The Demon Mark very much, especially once the action really began about halfway through. I thought I had figured out what the twist would be and was pleasantly surprised when the actual answer was drastically different. This is a riveting crime thriller that fans of noir and history will certainly appreciate.

The Challenges That He Faces

Vanir, Guardian follows a young man who’s heritage is revealed and danger surrounds him as he stands on the precipice of intergalactic war. What was the inspiration for the setup to your story?

I really wanted to explore Nordic mythology as real and that was the original idea for Vanir, Guardian. What if all the stories and legends were based on real events, but occurring via a visit from extra-terrestrial beings, rather than supernatural stories. That gave me a broad brush to explore Nordic tales but fit them into a science fiction narrative. The children in the tale are based on my children, the characteristics and the interaction between them is modelled on their reactions, my musings on how they would read tif faced with the challenges of Zeke, Martha and Elijah (and in the sequel, Tabitha). And finally Australia is the start of the story, because I’m Australian and the contrast between Australia and Svalbard is fascinating.

Ezekiel is an intriguing and well developed character. What were some ideas that informed his character development?

Zeke is naturally shy, and he has to learn to confront his fears to grow. I really wanted to explore his character arc as he confronts his real heritage, and all of the challenges that he faces. I really wanted to show a main male character who is not naturally tough or adventurous, and has to work really hard to overcome his anxiety and fear.

Vanir, Guardian is a genre-crossing novel with elements of a science fiction, fantasy, and Norse mythology. Did you start writing with this in mind, or did this happen organically as you were writing?

That’s the model I had in mind when i started, but it grew organically as the story developed.

This is book one of the Stormerki prophecy. What can readers expect in book two?

Look forward to the development of the main characters as the story arc continues. And of course, a thrilling story, suspense, battles, epic action! 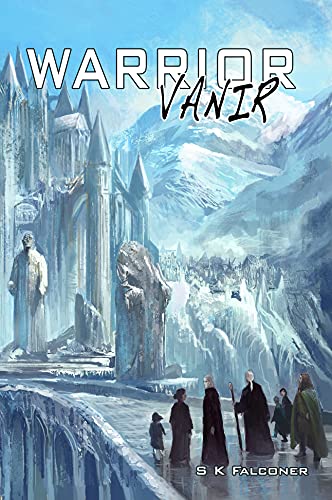 Vanir, Warrior by Saul Falconer is an adventurous book for lovers of Norse Mythology. This book brings characters like Freya, Heimdall, and Baldur to life as they interact with the three main characters of the book: Zeke and his siblings, Martha and Elijah. Each has unique abilities that give them special strengths against their enemies. The story takes a little while to get going, but the writing is excellent and after the first few chapters I was fully invested in this riveting story.

In the beginning, we get to see each of the children in action as they all undertake a sort of exam; Martha and Elijah taking on level four, while Zeke takes on level six. This introduction to their powers and capabilities in battle helps to set the stage for the rest of the book as they struggle to fight off the Myrkvar and the Illska, and other enemies who have the ability to travel the wormholes and attack Zeke’s people.

This book cleverly merges aspects of fantasy with science fiction, weaving different types of advanced technology throughout the worlds of Norse Myths, including everything from simulations to hoverpods to holographic devices and more. The focus of the story is on a return to “the old world” to investigate an illness that is making the people of Longyearbyen sick and of the possibility of Vanir prisoners being held captive there. One of the best aspects of the book is the relationship between Zeke, Martha, and Elijah, and how their bond helps them overcome any obstacles they face. Falconer’s writing is strongest in his characterizations and the interactions between the large cast. While I enjoyed the characters, I felt that there are a lot of them, along with races, cultures, and locations to keep track of.

Vanir, Warrior is perfectly written for pre-teen and young adult readers who have an interest in Norse Mythology. This is a spellbinding epic fantasy with imaginative technology and a sense of adventure that permeates the novel.