Arianne Whiteley is a wealthy New Yorker, she has all that life can offer, but the dangerous men of this world are what she wants most. We see this unfold as she visits the state of Montana to visit a friend after they were kidnapped by their evil brother. While there, Arianne meets Lucas Grayson, a member of the notorious Pit Vipers. Lucas starts a tumultuous affair in hopes of using Arianne to his advantage, to the dismay of her bodyguard, Mark. But as their desire grows, so does trouble. Even with all the challenges they face, they won’t let anyone or anything come between them.

Longing for You by author Alessa Kelly has everything a good romance novel should have, suspense, lust, and angst. She hits all the elements without going into too much detail. The steamy scenes between Lucas and Arianne have enough description to get a feel for the moment without being over the top. Readers will find this is more than just a romance novel, there is a strong storyline that the romance is built into, rather than a romance novel with a flat backstory.

Kelly’s writing is entertaining, and there is never a dull moment with the characters she has created. The character development is well done and each of the protagonists is multi-layered and dynamic. There is action and suspense throughout the novel. I wanted to race to the end of the book to see what happens to our characters, but I also didn’t want it to end. I enjoyed Arianne’s character as she is a strong female that knows what she wants.

This fast-paced novel has an action-filled plot that will keep readers engaged from the beginning. The action and the story blend well together, giving the novel a cohesive feel while keeping readers on their toes as characters race from one dramatic moment to the next.

Longing for You is a well-written and exciting contemporary novel. Readers that are attracted to the genre of western literature with action and romance mixed in will find this book a great book to sit back and relax with. 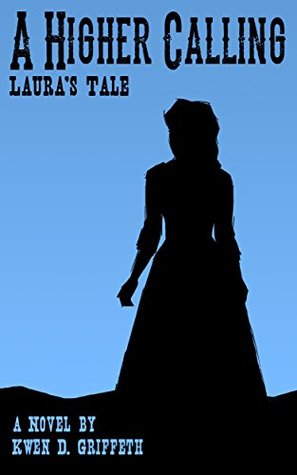 A Higher Calling is volume 2 in the Sam and Laura’s Story novels that follow the life of Sam and Laura. With William gone, Laura has taken over her father’s estate and Sam has stepped into the role of father figure to the children with a potential romance blossoming in the horizon. However Sam’s reputation follows him into his new life and even though he’s retired from his gun wearing, law fulfilling days, his new life is threatened as the opportunity for revenge comes knocking on the door. Will he risk compromising his new life for the taste of revenge for the ghosts of his past?

A Higher Calling, written by Kwen D. Griffeth, is a beautifully written novel that is filled with charm and a dash of action and romance. This novel takes us to Missouri where Sam is learning the ropes of being a farmer, surrogate father and a well-presented man. However, remnants of his old life filter through to Sam’s present and he finds himself mingling with people from the past. People who only knew him as the strong-willed and fierce man who struck fear into the hearts of those who were caught on the wrong side of the law will be surprised at the transformation that Sam has begun to undertake. Conflicting personas lead the people close to him to wonder, is he Sam Cardiff or is he still swept up in the world of Sam Moses?

There are innocent romances weaved throughout the story as William (William and Laura’s son) meets a beautiful girl, Opal with glistening hair that shines in the sun. The relationships are built from family ties right through to lovers and long-time friends. The progression of the relationship between Sam and William was one of the highlights of A Higher Calling as you watched them learn, grow and develop themselves into a father-son style bond.

The beginning of the novel felt a little slow at times however I soon realized it was important in the development of the characters. When an evil, twisted being knocks on Laura’s door, everything begins to change with Sam being forced to question himself and the new life that he has chosen. This is where the book begins to pick up speed and rides away into a story line that will keep you hooked until the very end.

I admire Griffeth’s ability to convey dialogue between characters that can be passionate and emotional and at times tugged at the heartstrings. The raw emotion could be felt from the character Laura as she processes emotions ranging from yearning to anger and good ole fashion love. You could feel her voice through the pages and I could effortlessly imagine her pain, her lust and even her fear. Even though the scenes at times were passionate, Kwen Griffeth keeps the story line always at a high level of class and sophistication.

I would recommend this to anyone who is looking for a heartfelt and action filled novel. Will Sam fit into his new role as the rancher who raises horses and cattle or will he be drawn back into the world of guns and western criminals?