The Destiny She Cannot Escape 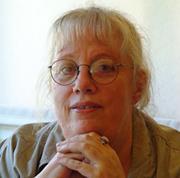 Protector of Thristas takes place fifteen years after the tumultuous One Day War and Lisen is faced with something far more challenging than ever before. What were some important themes for you to capture in this novel?

I’ve taken on several archetypes in these books with an eye towards shifting what originated as masculine-oriented myths into their feminine equivalent. Lisen is the hero of a story in which she must overcome many obstacles, including her own self-doubt, to rise at the end of the original trilogy to the destiny she cannot escape. I looked at heroes, such as Luke Skywalker and King Arthur, and asked myself how this would look not simply with a “girl” as the hero but with a gentler and more sympathetic way of presenting the momentous events that occur in the story. The battle at the end of Blooded is a case in point. Lisen found a way to break through the fighting and turn the combatants towards a negotiated resolution rather than one in which many people died or were left physically or emotionally injured.

So, when I decided to explore Lisen and the others as adults, to look at the relationships and their children fifteen years on, I made another decision–to raise the bar and tackle an archetype I refer to as “the king must die and live again.” This myth can be found in many nature-focused cultures. The leader of the people sacrifices his life (or acts the sacrifice out in ritual) and goes to the underworld, then rises again, all of which is symbolic of the “burying” of seeds in the fall and their rising as plants in the spring. It is a form of fertility ritual. It is also, in some ways, the Christ story, but this time it’s a young woman.

I think this book did a fantastic job displaying how emotional a mother-daughter relationship can be, and family relationships as well. How did you develop these complex relationships? Anything pulled from real life?

My mother was not the nurturing type which left my father with that role in my life. In fact, Korin’s nickname of “Fa” is the way my father, in his later years, signed birthday cards and such. But there was more to it than that. As I foraged deeper into the story and the wounded relationship between Lisen and Rinli, I realized one very important thing. I had to be very careful about how I framed the discord between the two of them. The critique group I belonged to at the time loved the portrayal of the mother-daughter conflict, but I began to recognize that I had created a very “earth-centric/potentially sexist” struggle. In my experience, women in our culture learn at a very early age that they must challenge one another over the attention of a man. Men are taught a similar lesson, but it manifests differently. Men thump their chests and growl at one another (figuratively) or go out and kick a football around, whereas women get mean. And it often begins in the relationship between a mother and daughter and their desire for the male in their lives–the husband/father. It’s fairly subtle in most cases, but it’s there, and once girls become teenagers with all those hormones raging, they may not “desire” their father, but they want what their mothers have and the fight is on.

I couldn’t let this be the basis for Lisen and Rinli’s conflict, so I struck out on my own to find something that didn’t smack of the sexism in the “typical” tension that can tear a mother and daughter apart. And although I may have no control over the enculturated eyes the reader brings to the story and her interpretation of what she sees in that relationship, I had to be true to my commitment to present Lisen and Rinli sparring not over the mean-girl stuff that can mess with a mother and a daughter but over the betrayal Rinli feels at her mother’s use of her as a bargaining tool to bring a war to an end. Add to that the fact that Lisen is not the nurturing parent in the family, and it becomes clear, in my eyes, at least, that their relationship was likely doomed no matter what Lisen did.

Rinli is resistant to the idea that she has her mother’s magic abilities. How did you handle magic in this novel that was similar and/or different from the previous novels?

In some way, I think the magic became more central to the story than it had been previously. I have always played the push as something unacceptable but sometimes necessary, even to Garlans who are pretty accepting of most hermit magic. As a Thristan, Korin distrusts hermits and what they can do, and Lisen has a powerful gift. This presented its own set of problems in the first trilogy and ultimately tore them apart. Now, with Rinli growing up and it becoming obvious to both of her parents that she has inherited her mother’s gift, Lisen and Korin have to make their peace over the magic thing and then band together to convince Rinli that the only way to stay safe amongst magic-fearing Thristans is to master her gift in order to control it. This is where that conflict I mentioned above manifests with Lisen trying her damnedest to reach out to Rinli and Rinli turning away. (I had one reviewer say, “So many times I just wanted to scream ‘Say I LOVE YOU!'” which would, of course, have simplified things a great deal. But it was about the magic in Lisen’s mind, and “I love you” wasn’t in her lexicon.)

I began a followup to Protector of Thristas with the idea that it would be the final book in the series. I had to find a way to put down the characters and the world I’d created in order to move on to something new. Five books. The series would be five books. I was adamant with myself. Then as I wrote and wrote and wrote, I began to realize that this was going to be one hell of a long book. I set a word limit at which point I would break it up into two books. I’m still on first draft, and I am within 2500 words of that limit I set. It’s definitely going to be 2 books. Because I’ve been making changes that affect earlier scenes as I go along, I must finish the entire tome before officially splitting them up. (And even then, I’m probably going to produce draft 2 of both books together, incorporating all the necessary tweaking at one time, before I turn to book 5 of the series and complete it.) All of this is to say, that this has taken far longer than I wanted it to take, but I continue to move forward.

As regards where we go from here, having sent a young person as flawed as Rinli through the experience of dying and rising from the dead, I discovered (upon working on the final two books) a character who is not doing well emotionally at all. It’s been an interesting trip. Rinli was originally intended to be the character to whom Lisen would pass the baton, but she turned out to be a character very different from what I had expected when I began. Her last words at the end of the book blew me away, coming as they did as I was writing that last scene, and they set the tone for the remaining story. I had to ask myself “what does a world broken by Mantar’s Child look like?” It took a while to answer that question. Now first draft is finally winding down for books 5 and 6, and all I can say is “whew, what a ride!” “When will it be available?” I’m hoping for some time early in the new year for book 5 and spring for book 6. 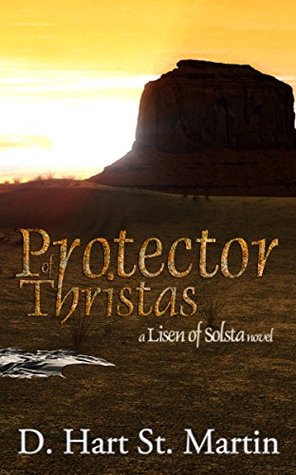 Fifteen years after the One-Day War, Lisen, now Empir Ariannas, has developed into a just and capable leader. Together she and Korin have created a union of two souls based on respect, commitment and love, and their family has grown. In addition to Rinli, their daughter who made her first appearance in Blooded, two more children have joined the family, completing their complement of three complicated adolescents.

Now the sixteen-year-out Rinli prepares to take on the mantle of Protector of Thristas, a title destined for her in the treaty that ended the war. The Empirs of Garla have carried this title for hundreds of years, and Lisen anticipates changes once she hands this single title on to Rinli at the girl’s investiture. But the prophesy of Mantar’s Child, upon which Lisen and Korin depended in the treaty negotiations fifteen years earlier, refuses to remain but a convenient myth, and with the advent of the fulfillment of the prophecy, an epic begins.

Although Protector of Thristas includes the familiar faces and settings of the young adult Lisen of Solsta trilogy, it begins a new adventure for an older and often wiser Lisen and her allies. Looking at their world through their matured eyes, the book takes on the heroic tragedy that the trilogy could only hint at. Return to Garla. Enter its mystical environs for a new encounter with Lisen and her world’s gender-free culture. The adventure awaits.