From The Shadows: A Journey of Self-Discovery and Renewal 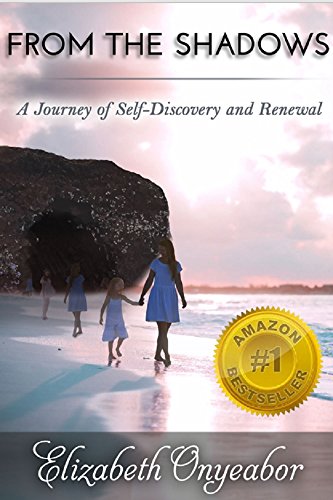 In the book, From the Shadows: A Journey of Self-Discovery and Renewal, author Elizabeth Onyeabor introduces her audience to the sum of her parts, figuratively speaking, and takes the reader through the journey of her life. Readers meet the youthful, bright-eyed, big-hearted, trusting Beth who she has left locked away for decades, and her counterpart, a less trusting and icier persona, Liz, who she adopts abruptly at the beginning of her teen years. Liz is described as the mask that gets her through every day. Liz is the person that coworkers and social media contacts know. She is also painfully drowning in depression. Her only hope of becoming a whole person again is to reconcile with the girl she locked out so many years ago.

Onyeabor’s reflective journey is written as a narrative, a journal, and a collection of poems rolled into one piece. I personally prefer the narratives to the more metaphorical parts of the book. I can identify more with her real-life stories and experiences. However, I do recognize the importance of her poetry. It is cathartic for her. It is a therapeutic release. It is her outlet. It is necessary.

The author dives very deep into her depression, explaining its breadth and depth. She explains how she feels and why. She describes the magnitude of her sorrow, guilt, shame, obsession, self-deprecation, and even suicidal tendencies. I’ve been lucky enough not to be able to fully comprehend being in such a depressed state, but it gives insight to the reader about what it must be like. It is obviously a constant battle for someone dealing with this degree of depression to keep her head above water. I’m sure those who are prone to depression would take solace in knowing there is someone out there who understands, and that they are not alone in the quagmire that Onyeabor describes.

In my eyes, Onyeabor is your typical wife and mother who makes sure everyone is taken care of, everyone but herself. Also, typical of mothers and women in general, she places the blame for literally everything that could possibly go wrong in her entire family on herself. She is the fixer. She feels like anything that is broken happened by her own hands. She also feels like she has the responsibility of sweeping up the broken pieces, dusting them off, and perfectly gluing them all back together. The problem is that nothing is ever perfect. She continues to chase perfection anyway. Never hitting that mark feeds her depression.

Another identifiable theme throughout the book is striving for spiritual perfection. Readers will see themselves in this struggle as old as time itself. Good vs. evil. We are often our own harshest judges in this aspect as well. She holds herself to unreachable standards. That perfection thing never quite happens, and it leaves Onyeabor feeling like a sinner at times.

I did find myself at times questioning how someone who seemed to have it all could be so depressed. I guess that’s the point. Living in exotic places, vacationing in Paris, having a successful job, raising independent kids. Those things aren’t always enough. Those things are sometimes painted façades stretched across crumbling buildings. I also feel for her family. It couldn’t have been easy for them to never hit that perfect mark either, and to feel helpless. They wanted to help her. They just couldn’t. It’s a personal choice to stay in the dark caves you’re accustomed to or to step out into the light. It’s a long walk. A journey. I cheered her on for deciding to take those first steps.

I am giving this book 4 out of 5 stars. It is written well, but can feel repetitive. There are also a lot of breaks in the flow due to the poetry entries. Over all, I think it could be very useful to readers dealing with depression. It will give them strength to pursue their passions and hope that there are brighter days on the horizon.