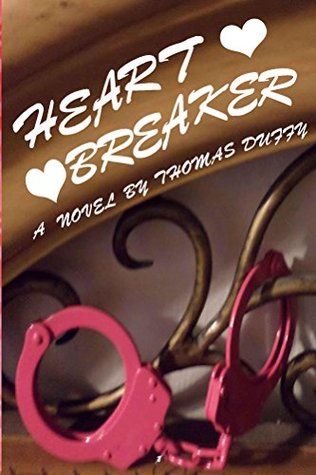 Simon Leigh is your average, ordinary advertising sales rep, nothing like the “Mad Men” of legend. He’s a regular guy, the steady sort, very dependable. If he’d been a bit more ambitious, perhaps he wouldn’t have lost his job and his wife over the span of two months. Now living in a boarding house, with no job leads in sight, he feels like he’s lost everything. At least he still has his dog to talk to. Like most dogs, Eric’s conversational skills aren’t that great, but his voice comes through loud and clear. Simon needs to do something exciting. He needs to go chase tennis balls.

Opportunity knocks when Simon meets his new neighbor, Archie. He seems friendly, but there’s something not quite right about him. When Archie offers him the chance to make a lot of money doing something that’s not even remotely steady or dependable, let alone legal, it launches Simon into a bit more excitement than he bargained for. Simon blunders into a world of stolen cars, robbery, car chases, narrow getaways, murder, and corruption. Through it all, the only one he can trust is Eric.

If you enjoyed Guy Ritchie’s films Snatch, or Lock, Stock and Two Smoking Barrels, this is the book for you. Simon can’t catch a break for love or money, and his awkward, middle-class lifestyle could have never prepared him for a situation quite like this one. He is caught up in events both terrifying and absurd, and his old life is falling apart. Author Paul Casselle does a brilliant job with Simon’s character, playing his anxieties so perfectly that every reader will find something familiar there. Even when Simon attempts to do the right thing, his social ineptness, timing, and circumstance seem to work against him. Even Simon works against himself, sometimes acting against his own self-interest with hilariously cringe-worthy effects.

The supporting cast is also full of surprises. His other neighbor, Rebecca, seems like the candles-and-incense type, but like everyone in the book, she’s much more than she seems. She has a stronger stomach for violence than Simon, but for the most part, she could use some anger management courses. Archie bounces between a manic temper and everyone’s best buddy, hitting all points in between. His cohort Tommy Dragon looks like a tattooed gangster, but he’s got his own agenda. It’s clear why Simon prefers to confide in Eric than any of the “partners” involved in the scheme.

Conversations with Eric could easily be adapted as a screenplay for a successful film. It’s is the kind of crime comedy that is filled with both nail-biting tension and awkward, sometimes absurd humor. Of course, this is a crime novel and the author doesn’t shy away from the violence and bloodshed of this illegal enterprise. I highly recommend this for fans of British comedy or the type of cringe comedy found in American TV shows like Curb your Enthusiasm.

The Monster interviews Thomas Claburn, author of Oversight. We talk about the proliferation of overbearing advertisements, quack medical devices, and his decision to write for people instead of machines.

The world in Oversight is ‘hyper-commercial’, personalized advertisements are placed everywhere imaginable. What is the origin of this idea for you and how did it develop over time to fit in the story?

It’s hard to pin down a single source for the idea. Certainly the film version of Minority Report deserves some credit. But in my work as a journalist, I regularly cover Google and Facebook, both of which would like nothing better than to present you with the right ad at the right time. I’ve also written a number of stories about ad blocking and a surprising number of marketers would prefer that people not have the ability to skip, block, or otherwise avoid ads. In a sense, we’re already living in a hyper-commercial world, but we’ve become inured to it.

I started Oversight about seven years ago. There was no Google Glass back then and virtual reality was far more primitive and obscure. A few months ago, I decided that I should just finish the story and get it out there before reality leaves fiction behind.

I’ve written a number of articles about patents and patent lawsuits. In the course of searching about various patent-related topics, I came across the patent for Judah Moses’ galvanic spectacles at a website on medical antiques. I found them intriguing and ended up using them as the seed to get Oversight rolling.

Given the renewed emphasis on wearable technology throughout the media today, I’m glad I made that choice.

You use some programming terminology in the book. Do you have any experience in programming, and has that played into your writing at all?

I got into programming in high school back in the 1980s, when I learned a bit of BASIC. I eventually decided that I’d prefer to write for people rather than machines. I’m still not sure whether I made the right decision. And lately, I’ve been getting back into it, in part because the economics of writing are not what they used to be.

Sadly, the economics of apps are not really very different from books. I’ve coded several mobile apps, which can be found through my website, Lot49.com.

I find that writing and programming complement each other. For me, they require very different states of mind and it’s nice to be able to switch between the two when one isn’t coming easily.

What is one thing that you hope your readers take away from Oversight when they are finished reading?

I hope Oversight is entertaining most of all. Time is precious and I’d like readers feel their time was well-spent. But I also hope it raises people’s awareness of how technology changes us and affects society, for good and bad. There’s a lot to be ambivalent about.

The ending of Oversight leaves the story open to a sequel. Do you have another book in the works?

That was not an oversight. I wanted to have the option to pursue a sequel, if the book attracts an audience. I’d like to take a deeper look at the consequences of an environment that’s both computerized and weaponized. But I’m also mulling whether to take a stab at the YA market with a fantastical adventure about a girl with ADD, her highly-organized sister, and a fading oil dynasty. And I have some short stories that I may issue as a collection. I expect I’ll decide how to prioritize my time once I get through the initial push to raise awareness of Oversight.

Want more info on Thomas Claburn? Want to know what he’s up to?