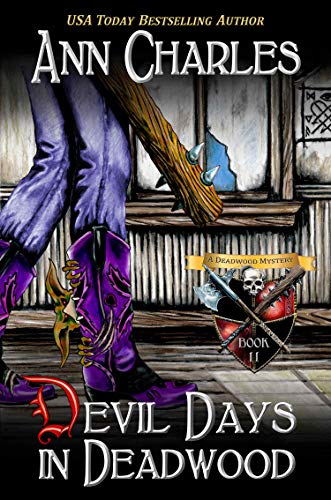 Devil’s Days in Deadwood by Ann Charles is a fun supernatural thriller. The story delves into the life of Violet Lynn Parker a seemingly normal human being who works as a real estate agent but is involved in the supernatural as a ghost hunter. The protagonist is part of an agency that is tasked with defending Earth from the evils unseen by normal human beings. The compelling heroine of the story faces a formidable foe but she requires help from and engaging cast of characters in order to overcome the exact definition of evil incarnate. The story is set in the alluring town of Deadwood, a town plagued by mysterious happenings since time in memorial ranging from ghosts to haunted houses.

Ann Charles has invoked various stylistic devices that highlight her writing skill and made this novel stand out in the paranormal genre. Although this is book eleven in Ann Charles’s Deadwood Humorous Mystery series, I think new readers will be able to jump right in as I have. What I particularly liked about this novel, and Ann Charles’s view of the supernatural, is the satirical lens that it is all viewed through. It’s a stimulating blend of humor, mystery, and paranormal that all come together to make the reader alternate between gasps, laughter and furiously flipping pages. It reminded me of the writing style of Douglas Adams or A. Lee Martinez.

Violet is an exceptionally well defined character, someone we can relate to as a mother who works hard to provide for, and protect, her children. But in the same vein of Buffy the Vampire Slayer, she’s a demon executioner who risks her life to defeat some truly vile, other worldly, beings. While I understood Violet’s motivations, and her emotions, I did want a little more backstory. The world created here is interesting and I wanted to explore it more, though I suppose I could by reading the other novels in the series.

I was excited about this novel from the very beginning, based on the short synopsis of the book. I was thoroughly entertained and may have found a new series to while away the time in quarantine. Fans of supernatural thrillers will find an exceptional piece of literature that offers a unique voice to this genre.

A World Much Darker

The Dark Age Chronicles is a genre-crossing novel with elements of a fantasy, horror, and adventure as well. Did you start writing with this in mind, or did this happen organically as you were writing?

Well, I knew that I wanted to have the book set in the time of pirates. I saw “Treasure Island” when I was twelve years old and after that I was in love with pirate movies. I watched every Earl Flynn movie I could, or anything pirate related. It wasn’t until I was older that I wanted to take that aspect of the dark ages, of how we treat one another, and introduce a world much darker, more sinister. Growing up I watched sci-fi, fantasy, and horror movies and I think I always knew I would combine them if I could. My love for shows like, “Charmed”, “Walking Dead”, “Buffy The Vampire Slayer”, and “Supernatural” helped me want to combine the genre as I got older.

I know this is going to sound so lame but I had a dream when I was twelve about this girl standing on a dock at night in a storm overlooking three tall ships. In the dream she was so sad and she seemed distressed. I woke up and have never got that image out of my mind. That was the day the story started to develop in my head…the day Eve was born. It wasn’t easy because as I grew up so did my character and I found ideas along my life that I wanted Eve to experience. I also had to develop a writing technique that I didn’t have at twelve. I actually had a file that I would place ideas in until the day came to actually start writing it. When it did, well, the book was transformed to new ideas as I wrote.

Eve is an interesting character that I thought was well developed. What were some driving ideals behind her character development?

I wanted a character that was in the world but felt alienated as well. Giving her pale skin, unusual red hair, and a mark on her hand in the dark ages was like signing her death warrant. To have to be born with that stigmata helped set up the story line for Eve’s fears, and her long for social acceptance. Because of the lack of love she has been shown from Randall Cambridge, her grandfather, she feels like she is evil. Children often always blame themselves when adults do things, and Eve is no different. She even still tries to believe if she does what he wants she will win his love someday. Even though she is beaten down, she has an inner strength that won’t let her give up. I wanted a character that had to struggle with should I help these people even though they watched me get abused and didn’t help me? It would be hard for anyone to do that. I wanted to take her down that path and find out the answers.

The Dark Age Chronicles has four books total in the series and are all out on Amazon.com paper back or Kindle and I am currently writing a new novel called Portals.

The Dark Age Chronicles books in order: Eve of Darkness, Eve of the Hunters, Eve of Destruction and Eve of Battle.

In 1717 it was a time of darkness,where stations kept to their own and people struggled to survive. A time where pirates still roamed the seas, slavery was suffered and ignorance reigned supreme. But there is coming a greater darkness that man can’t hope to fight A darkness that will consume every soul on earth. One young girl named Eve, born with a mark on her hand, outcast and abused, learns that she is the chosen one that must stop the rising evil. The last of a known race who protected the world, she must fight a horde of demonic hell hounds, demons, and her worst fears. Together with six others, she must learn to use powers she never knew she had if she ever hopes to defeat Nyx…. the most powerful Necromancer ever born.