The Nightmare From World’s End is a science fiction thriller that begins when various people go missing along a river and a mythical squid may be to blame. What was the inspiration behind the idea for this book and how did that change as you were writing?

It was two things, actually. The first was an offhand comment by my wife one day while we were having lunch along the Hudson River. It was something out in the water that I took a grainy photo (zoom lens) and it came out looking like the classic ‘Loch Ness’ hoax photo. She looked at it and said: “Oh, that’s Ossie!”. “Indeed it is,” I replied, and so it started. The second was a massive crate I discovered along the shore of the Hudson after a big storm. It looked like it had been underwater for some time. That’s how it usually works – something I saw here, a comment there.

Along with that was a genuine curiosity about the American Indians that once populated this area, which go back at least 8,000 years. For me it’s a fluid process of researching and letting it inform the story as it develops. For example, I’d had the concept of the ‘Crazy Jack’ character for years, but dismissed the name as a product of me watching too many movies or TV shows. So, I initially wrote a scene where the American Indian anthropologist – Sarah Ramhorne – is saying as much. Then I discovered (to my shock) that in Munsee/Lenape mythology, there really is an enigmatic trickster named ‘Crazy Jack’. The joke was on me.

Native American folklore around the Hudson River area is a relevant theme within the book. What was the inspiration to infuse such rich culture in this novel?

So little is written about it yet aside from local names – Wappinger, Kitchawank, Weckuaesgeek, Sint Sinck – almost nothing remains of it here. It’s like a ghost hiding in plain sight. Many of the local tribes here were wiped out completely within a couple decades of first contact – we don’t even really know what they looked like. That naturally piqued my interest.

Is there anything that readers connect with in your story that surprises you?

People seem to really be into the characters in this one. That and the American Indian history. A frequent comment I get is: “Is all that stuff true?”. As far as I know, yes.

Your story makes mention of the ancient alien theory. Why did you include this in your novel?

Mainly it was by accident. I was at a local Indian pow-wow researching the story when I ran into an American Indian vendor who in a confidential tone started going off about ‘lost technology’, Atlantis and how the Indians ‘really’ got here in spaceships and had forgotten it. I immediately thought “This is too rich, I have to work this into the novel!” Then it became a running joke through the story: what if some real phenomena was going on to one side while everyone in the story is focused on the hoax phenomena happening on the other?

Currently writing another novel for Severed Press titled The Lost World of Kharamu. It’s an updated take on Michael Crichton and Arthur Conan Doyle themes. It’s due out later this year – stay tuned. 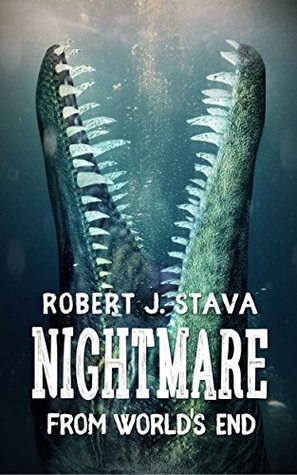 In the aftermath of a major hurricane, a massive antique crate washes up on the shore of Raadsel Point. It’s smuggled cargo from the wreck of the Edmund Wood, an unregistered transport returning from a very unusual expedition. . . a ship that went down in the deepest and most dangerous part of the Hudson known as ‘The World’s End’. The nightmare creature it contains is about to unleash havoc on the citizens of the sleepy river village of Wyvern Falls and inadvertently draw to it a predator thought extinct a millennia ago. It will come down to two people to figure out what both these creatures are and how to stop them: expat CID Detective John Easton and American Indian anthropologist Sarah Ramhorne. The two of them will have to unravel local Indian myths, outmaneuver a corrupt mayor, a failing Ancient Astronaut Theorist TV show and an overzealous Green Folk Festival if they are to stand any chance of saving the day.