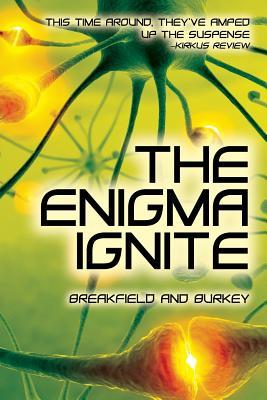 The Enigma Ignite, by Charles Breakfield and Roxanne Burkey, is fraught with technological advancements and a lesson in all things computer. The entire team of characters assembled by the authors is rich with all the appropriate levels of humor, drama, and romance. The diverse cast of characters are members of an exceptionally knowledgeable team working overtime to rescue Keith Avery and Eilla-Zan from terrorists while simultaneously solving the dilemma of safely and successfully transporting Su Lin, Daisy, and Franklin (a pig and Su Lin’s prized possession), who themselves may hold the answers to cleaning up the mess made by the horrendous failures in battlefield communications technology.

Once again, Breakfield and Burkey have created some villains of epic proportions. Oxnard (that name alone is sneer-worthy), kidnapper and all-around cretin, is one of those evil-doers readers will revel in hating. At one point he seems to almost cherish describing the beating into submission of elephants as he taunts his captive, Keith Avery. Oxnard represents everything vile in a human, and the authors have more than hit the mark with this character.

The various pairs of team members who work together all have a chemistry that can’t be beat. The authors have succeeded in crafting characters like Julie and Juan and Petra and Jacob who rather effortlessly morph from business-like and focused to laidback couples thoroughly enjoying each other’s company. Each couple is as intelligent and driven as the other, and virtually all of their dialogue flows smoothly and is laden with relatable humor.

I found Su Lin and Franklin’s storyline to be rather intriguing all the way around. The fact that Su Lin’s experiments could yield results helpful to the military and stemmed from her work with a pig, well…it was a fascinating spin. Daisy’s very personal and painful experience related to her work makes the entire subplot much more believable and personal for readers.

Though filled to the brim with technical terms and bubbling with all the seriousness of big screen drama, the authors lace their work with humor. The acronyms themselves are, more often than not, based on levity. For example, the acronym COBWEB represents Civilian Observer Blokes Wearing Excessive Bling. I had to laugh out loud at the appearance of the brothers, Won and Ton. Breakfield and Burkey, without a doubt, deliver the humor.

I have to say that the addition of Andy to this cast of characters is a welcome one. Andy, experienced in communications and a native of the South, was a pleasure to read. Being from the South myself, I appreciated his southern drawl and the references to his hospitality. Stereotypical? Maybe. In a good way? Absolutely.

I have to rate The Engima Ignite by Breakfield and Burkey a 5 out of 5. I thoroughly enjoy the dialogue between the characters whether it be between the villain and the heroes or between the good guys in their private moments. The authors manage to take highly technical terms and procedures and make them relatable for the average reader. Their well-drawn characters are a huge part of that success.