The Watchers follows Larna and her friend Corinth on a mission to destroy the most vile of vampires, Gabriel. What were some ideas you brought from book 1 in the series and what were some new ideas you wanted to explore in this book?

I wanted Gabriel Stanton to be more than just a one-dimensional villain. In Volume two, it was important that I show his motivations on why he does what he does, but I also wanted to make people hate him, and then by the end of the book make him a little less vile. In Volume three I will definitely play on this more.

With any vampire book today you can’t help but compare it to Twilight, which I think your book far exceeds. What were some sources of inspiration for you while writing?

It’s funny you should mention Twilight. I mean, I get it, Twilight is one of the most popular stories out there. I started writing The Blood Dagger series in 2012 – at the height of Twilight’s popularity. Twilight was in part, one of the reasons I started my own vampire series. But it was really important for me to create a more relatable female protagonist. Someone far from perfect; who had a lot of growing to do in order to find her strength. It was also extremely important to me that my story more about the plot and less about pining over the love interest. Don’t get me wrong, I still like the ‘chosen one love triangle’ scenario, but I didn’t want to make it the main focus. My sources of inspiration are Jim Butcher’s Dresden Files, Cassandra Clare’s Mortal Instruments, and Alexandra Bracken’s Darkest Mind series.

If Hollywood came knocking, what actresses/actors would you cast as the main characters?

Oh man! Don’t tease me . . . I would absolutely LOVE for this to happen! And I unashamedly admit that I might have thought about it:

Where will book three in The Blood Dagger series pick up and when will it be available?

Volume three will pick up right where I left off from The Watchers. It will be just as action-packed and full of suspense. There will be plenty more surprises and plot twists included. Volume three: Tree of Souls is planned for a release date set in December 2019. 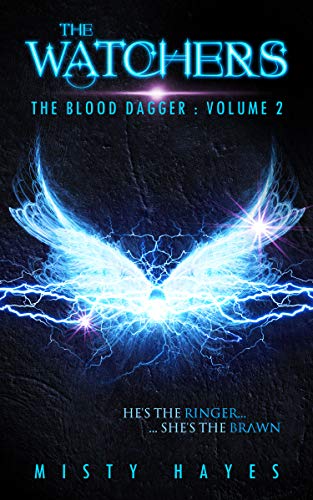 Eighteen-year-old Corinth Taylor didn’t sign up to become a Watcher—an elite warrior destined to restore balance to the human race—he was chosen. Corinth can barely control his own hormones … much less the deadly blade. And to make matters worse, his best friend, Larna, just so happens to be the very thing he’s supposed to eliminate.

But when vampires and slayer find a common enemy, Corinth knows it’s his innate calling to hunt evil down. And evil has a name: Gabriel Stanton. The enigmatic vampire who escaped their capture, has plans for Corinth, Larna, and Alastair … and it’s a threat they’ll never see coming.

When the line between good and evil gets crossed, devastating consequences start to happen. As Watcher and vampire worlds collide, Corinth must decide where to place his trust: with his old allies or his killer instincts.

An upstart slayer. A clan of vampires. What could go wrong?

It’s only the end of the world.

The Watchers is the second book in The Blood Dagger series, a high-octane paranormal YA thriller. If you like witty heroines, unconventional relationships, and friendships that can withstand the grave, then you’ll love Misty Hayes’ high-stakes story.

Sink your teeth into a fun, fierce vampire series today.

The Watchers: The Blood Dagger: Volume 2 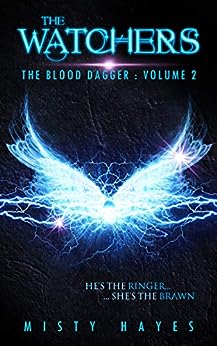 Corinth is not the man he used to be, and Larna is certainly not the woman she once was. Together, the two lifelong friends make a pair of opposites like no other. When Corinth finds himself with the dagger that inexplicably seems to grant him Sight, Larna begins to notice changes in Corinth that she isn’t sure she understands or likes. Larna, a newly-turned vampire and her best friend, Corinth, a Watcher, both feel an overwhelming sense of foreboding that has nothing to do with their mission to find and destroy Gabriel, the most vile of vampires. As they make their way through one life-threatening situation after another, Corinth and Larna tiptoe around more than one unspoken question in their relationship.

There are plenty of readers who will pick up The Watchers: The Blood Dagger #2 by Misty Hayes and proclaim it, at first glance, to be nothing more than a take on the story told in the Twilight series. Do NOT be fooled. Misty Hayes has taken the age-old vampire tale to a whole new level! She goes far beyond the Twilight-type plot and leaves it in the dust helplessly spinning its wheels. Once upon a time, I thought that entire series was the be-all end-all of vampire tales, but Misty Hayes’s Blood Dagger series is quickly bumping it from the coveted spot.

I had the pleasure of reading The Outcasts: The Blood Dagger #1 and was enamored from the get-go. Hayes is a master at character development, and nowhere is that more apparent than in her descriptions of Corinth and Larna and their self-talk. The second guessing and self-examination the two do throughout the text allow readers a firsthand look at their fears and their apprehension as well as their own amazement at their growing powers. Reading The Outcasts prior to reading The Watchers is not a must, but it is most certainly a plus when examining the growth the two main characters exhibit. Hayes does a phenomenal job of making this a stand-alone novel that serves to fire up readers’ desire to hear the full backstory of Corinth, Larna, and the feared Gabriel.

Hayes’s books are filled with humor. For as breathtakingly full of action as they are, they are equally as humorous. Hayes peppers her work with quips and one-liners, giving a fantastic depth to each of her characters. Readers will fall in love with Corinth and Larna if for nothing else than their ability to find humor in the most dire of circumstances.

Not to be overshadowed by the light hearted and whimsical, the dark and brooding element is definitely present in Hayes’s characters. In The Watchers, Corinth undergoes quite the transformation and is in the midst of examining his lineage, both of which are giving him pause. As Larna struggles to understand her friend’s trials, she cannot fully delve into his issues due to her own intense physical training and the division she feels between her love interest, Alastair, and Corinth himself.

Hayes writes romantic scenarios in the most tasteful and thoughtful ways. The Watchers: The Blood Dagger #2, though billed more as young adult fiction, appeals to fans of vampire tales as well as fantasies. Hayes’s work fits neatly into a variety of age ranges and genres beginning, but certainly not limited to, young adult.

Hayes’s work is, hands down, some of the most striking to hit shelves in the last decade. There are no characters out there like Corinth and Larna, and Hayes’s style of writing in alternating perspectives helps give rise to the inevitable success of The Blood Dagger series. I’m waiting with bated breath for book 3!