← To End One’s Own Life
Shadow of the Moon →

Trying to Devour the Population

H.A.L.F. Origins follows Tex and Erika while they’re running for their lives against a deadly alien virus that is spawning an epidemic around the globe. What was the inspiration behind this idea and how did it develop as you were writing?

The idea of an alien virus was part of the H.A.L.F. storyline from the very beginning of my planning back in 2010/2011. But I planned that the Conexus (the “aliens” behind the virus) wanted to wipe out humans so they could take over the planet. That idea changed a bit when I had the later idea of introducing the M’Uktah, predator aliens from across the galaxy. The addition of the M’Uktah altered how the virus would be used. In general, as I developed the story, I kept looking for ways to make life more and more difficult for my characters! So in book three they are beset with the obstacle of both a virulent virus and alien predators trying to devour the population.

The story is fast paced and throws readers into the deep end of the action. How do you balance action with storytelling to create such a captivating novel?

Novels have lots of “moving parts” and finding balance between the elements is perhaps the greatest challenge. Action, character development, setting, plot, pacing, theme, dialogue, character arc–these and more are all part of the process. Having a fabulous content development editor helps a lot. Alyssa at Red Adept Editing has provided early feedback on all of the H.A.L.F. novels. She is great at helping me see ways to improve pacing, etc. Some of it though is intuitive, but intuition seems to improve with more writing experience. 😉

I enjoyed watching Tex and Erika’s relationship grow throughout the story. Was there story organic or did you plan it in advance?

I did not originally plan for Tex and Erika to end up together. When I wrote book one, I assumed that Erika would end up with Jack and that Tex as their relationship “complication.” But that’s now how it ended up and so yes, what transpires between Erika and Tex was organic. Writing their relationship was the most satisfying part of the writing process of this series.

This is book 3 in the H.A.L.F. series. Are you moving on to other stories or are you going to continue to develop this universe you’ve created?

I am finished with the H.A.L.F. stories and do not intend to write more about Tex or Erika (or Jack and Anna). I’m currently focused on development of an entirely new project that will be epic fantasy.

I may, however, write some shorts or perhaps a serialized story set on the planet of Uktah, the world of the alien predators from the H.A.L.F. series. There has also been interest by screen writers and producers in developing H.A.L.F. for television, so I’ll be working on that as well in the coming months. H.A.L.F. may show up on the small screen some day. 🙂

And I’m introducing a new writing challenge for the writing community called PENuary that will debut January, 2018. Inspired by Inktober, I’ll be writing a minimum of 20 minutes per day from a one-word writing prompt for each of the 31 days of January. I’m inviting other writers of all skill levels to join in this endeavor. You can read more about it here. I’m hoping that I end up with 2-3 cool ideas out of the 31 day challenge. 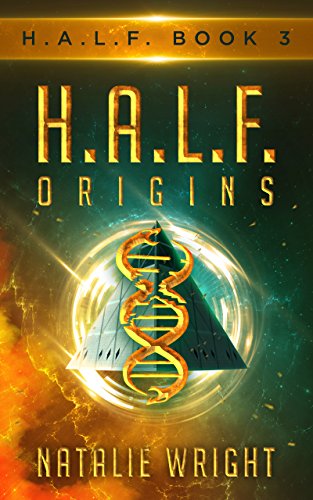 A deadly alien virus spawns an epidemic. Predators attack Europe. And a clandestine organization conspires to profit from chaos and forge a New World Order.

In this heart-pounding finale of the award-winning H.A.L.F. series, Tex, Erika and the rest are in a race against time. They fought for their lives. Now they battle to save our species.

Tex and Erika are fugitives and running for their lives. But when Tex falls gravely ill, a Navajo healer is his only hope for survival. Tex emerges from the ordeal changed in body and mind and with vital information: how to stop the predatory M’Uktah from overtaking the human population and destroying those he has come to love.

Erika Holt seeks a respite from the constant threats to her life but she’s not about to give up. As she and Tex launch a mission to shut down the intra-galactic highway used by invaders who prey on humans, she grows closer to her troubled half-human companion. But what about her on-again, off-again boyfriend, Jack?

Jack Wilson, with his friend Anna Sturgis, is on a mission of his own. He’s determined to destroy The Makers, an illuminati-like organization behind the H.A.L.F. program. It’s time to put an end to their schemes for world domination. Complicating matters, an anti-viral that could save millions from an alien virus has been stolen. As both alien and human forces line up against them, the destiny of all mankind is hand the hands of these young warriors. And time is running out.

← To End One’s Own Life
Shadow of the Moon →