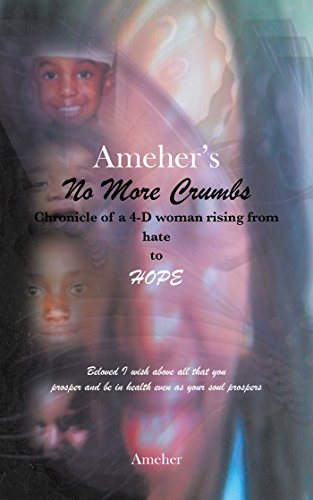 Ameher is a woman of strength, compassion, and a faith like no other. From a very early age she endured hardships in Nairobi only to pursue the American dream as an immigrant and face immeasurable abuses and prejudices in her new home. When she struggles to find a safe place for herself and her children, she is met head-on with one challenge after another but chooses to hold her head high and never give up as she battles a system designed to protect citizens but fails in all too many cases. Nowhere is faith more explicitly exemplified than in Ameher’s life as immigrant to the United States.

Ameher’s No More Crumbs Chronicle of a 4-D Woman Rising from Hate to Hope is the author’s own story of harrowing experiences as she tries desperately to find someone she can trust. Her story in an important one and one that bears repeating until a broken system is finally repaired.

At 400 pages, the author has enough striking material to make a short series of three separate books based on her life. The many abuses and the detail to which she goes into regarding her life with Todd make for an entire work on their own. The author takes great care to explain the entire process to which she was subjected, and this section of the text would make for a moving book all by itself.

The author recounts the expectations placed upon her as one raised in a religious home. She addresses the stigma attached to having a child out of wedlock quite well. Throughout her ordeal battling the system in the United States, she is able to lean on her faith and holds strong as she relies on friends who seem to exhibit a shared strength of faith. As I see it, Ameher has the makings for a fantastic self-help/devotional book centered entirely on her own faith. A book of this nature would make a fascinating read.

Because Ameher is an amazing example of persistence in the face of adversity, she is a prime candidate to pen a book on the discrimination faced by a woman of color in the United States. The challenges she faces are a sad but true testament to the daily struggles faced by people of color across this nation.

Ameher’s work is explicit enough to be engrossing, but not graphic in nature. The author takes care to explain the horror of her trials without turning readers off with vulgarities.

As effective as Ameher’s work is in capturing readers’ attention, it could use some additional editing. At times, it reads a bit like a rough draft with more care placed in the emotion of the wording than in the accuracy.

Ameher has bared her heart and soul to the world in order to help other women with her book. Any reader who picks up her story will be inspired to keep the faith and rise up in the face of adversity.