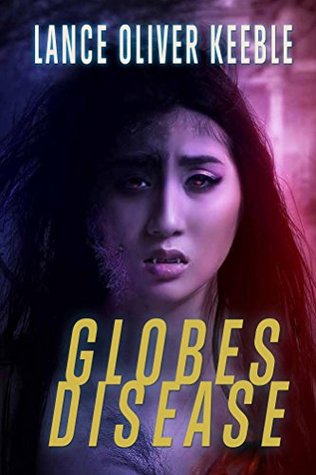 Globes Disease by Lance Keeble is an edge of your seat thriller! We follow Jodi and several of her friends as they deal with an affliction affecting all of them. Their small town is under siege by a Vampire, who hunts those with such an affliction and government agencies promising them a cure. This strange mix of individuals must come together if they hope to survive. They will not only have to fight for each other, but fight to keep their humanity in the process.

I did not know what to expect going into this book. The cover art was interesting, as was the title, but once the story got going I was more mystified by what genre this novel fits into. It’s not quite science fiction, even with the disease device. It does not feel paranormal with the vampire and lycanthropy. Even with the suspense/thriller elements thrown in, they alongside with all the other speculative fiction elements do not define the book entirely. For the indiscriminate genre reader, this book is for sure a treat, because it plays with all the familiar conventions found in those respective genres.

From page to page, Keeble’s prose is electric. The characters jump off the page with each thought and action that they conduct. And to some degree, I felt like I knew these characters at one point in my life, because of the breath that Keeble can breathe into them. I was amazed. Some of the names had me scoff, like the characters, Quake and Ano, but as time went on the names kind of went with them and felt natural.

All in all, the pages read very easy and the reader shouldn’t be surprised when they find themselves twenty pages in after a blink. The pacing Keeble maintains is one that I admired, since it lends to the novel’s suspense and thriller architecture. And it is not only that, but the mystery that exists within the early pages of the book, because as the reader you want to know how all these various characters get swept up into this awful mess.

There were some hang ups for me as a reader, mainly along the lines of how many points of view Keeble chose to follow. It makes the chapters very short and it can ready almost choppy at times, since we are jumping from head to head. This flaw is only saved by how well written his characters are.

The final verdict is this: if you are looking for an interesting and pulse-pounding read than I would recommend this book. If you are searching for a book that defies genre convention and definition than this is the book you are looking for. If you desire a book with a fun case of characters bound in a common mission and goal, when the world is so divided, then this is the book for you. If any of those reasons apply to you then I would very much recommend this book.