No Quarter: Wenches follows two characters; Atia Crisp as she finds herself imprisoned in the wickedest city on earth, and Captain La Roche who must find a way to liberate the woman he loves while waging a war against the English. What was your inspiration for creating a women’s adventure novel involving pirates in the 1600’s?

I am inspired by stories/movies with strong female characters, so naturally if I was going to write a story, I would be drawn to having strong female leads. I wasn’t particularly drawn to writing historical fiction until I read the original No Quarter Series (Dominium and Wenches) scripts written by GM O’Connor. He’s always been fascinated with history, particularly during the time of pirates. He asked me to read the scripts and I thought they would make a great book series. So we collaborated our interests and I became fascinated with getting all the details (locations, costumes, furniture, architecture, ships) as accurate as possible. We also use a combination of real-life inspired and fictional characters, which adds realism and adventure.

No Quarter crosses many genres. What books or authors were the biggest inspiration for you?

Moonfleet by J. Meade Falkner was the most inspirational book as it told the tale of smuggling, pirates, treasure, a sea voyage and a hurricane in 1898. It was very rich in details and I felt very transported by it, so I wanted to do the same for No Quarter. Also the book Port Royal, Jamaica by Michael Pawson was inspirational as it gives a glimpse of every day life in 17th century Port Royal and details locations, how they imported food/water and even what ships were around and what they were used for.

This is a very fun novel. Did you have fun writing it?

Yes, it was very fun writing this. My co-author GM O’Connor and I would have brainstorming sessions to come up with entertaining names and comedic dialogue/scenarios. Or sometimes we’d come up with something just buying groceries, watching movie or wake up at 3am with something hysterical and had to write it down before forgetting it.

No Quarter is the first volume in a series. Where do you take the characters through the rest of the series and how does the development of their characters progress?

Atia for example, is indentured, so she’s quite complacent, but she also has a rebellious side that hasn’t been fully explored yet. When she starts working at a Port Royal tavern, she starts to understand the workings of the city and she learns manipulation and eventually turns to being a spy. Basically, she grows up and becomes a fighter. La Roche is already set in his piratical ways, it’s in his blood, it has been since he was a child. When he meets Atia, he’s drawn to the idea of a “normal” life with marriage and children. His development hinges on his willingness to let go of violence and piracy. He wants to retire from it all, but that’s not an easy task, as situations arise which require him to be piratical. He eventually comes to peace with his internal conflicts and finds balance.

In 1689, Atia Crisp finds herself imprisoned in the wickedest city on earth, Port Royal, Jamaica, while the refugees from Strangewayes’s plantation in the Blue Mountains are on the run and seeking a new home, deep in the Caribbean. Captain Jean-Paul la Roche must get them to safety and find a way to liberate the woman he loves while waging a war against the English with the pirate Laurens de Graaf. While besieged people suffer and starve, a group of women form a secret and illegal society deep from within the bowels of the city called: WENCH. A network that deals with smugglers, merchants, cutthroats and thieves. Dragged into the struggle for supremacy of the Caribbean, the women are divided and find themselves engulfed in bloodshed. The pirates of Port Royal and former enemies may be their only hope of escape. Hell hath no fury like a cross wench! 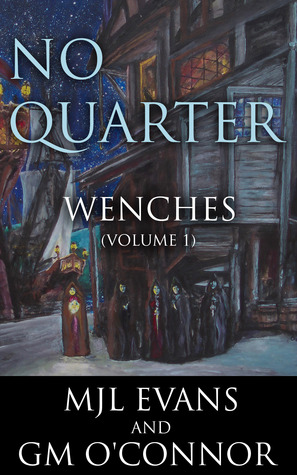