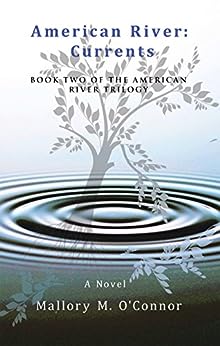 Kate’s family has just survived the devastating loss of her brother, Julian, and she is learning that her father’s coldness toward her beloved brother could have taken a much different turn had fate not intervened. As a new mother, Kate faces many challenges. One of those challenges is finding an effective and appropriate way to handle the affection she receives from Stefan, her husband’s friend and her sister’s true love. While Kate is facing one obstacle after another as a young mother, Tommy is reeling from the loss of his mother and coping with his fiance’s mysterious illness. Not to be left out of the cast of characters meeting life head-on, Marian is learning to love herself again with the help of a much younger and virile man named Nick.

Mallory M. O’Connor’s characters are a force with which to be reckoned in American River: Currents. O’Connor has created one of the most unique blends of historical fiction and the soap operas of the 80s. This lengthy novel features three families, ethnically diverse and intertwined in each other’s lives–in some cases, too much so. The bounce back and forth between chapters gives the entire book the comfortable feel of watching episodes of a well-established soap opera.

O’Connor has, without a doubt, done the research and created amazingly accurate and detailed accounts of historical events. Each of these events is not just described but somehow affects the characters day-to-day lives. From Cesar Chavez to John F. Kennedy, she has succeeded in further bringing life to her characters by having them live through gripping and history-making events.

As O’Connor’s chapters tend to vary from one family to the next, I found that I looked most forward to those focusing on Marian and Nick. To say the two are interesting would be putting it mildly. In an otherwise heavy book, Marian and Nick’s dynamic provides much-appreciated lighthearted moments and a breather from the drama of the other family members. Marian, not without her own faults, is my favorite character. Being one of the older characters in O’Connor’s work, she is struggling to make her way as an artist and is learning to love herself again and finding that trust is something she just might be able to feel once more. Nick is just the remedy for what ails her.

I couldn’t help but feel an overwhelming amount of sadness at the relationship between Alex and Stefan. I see Alex as a strong woman who is, when it comes to personal relationships, weak and needy. The manner in which she pursues Stefan is almost pitiful. She is an interesting character indeed.

It seems like such an obvious thing to note, but I love the way O’Connor ends each chapter. Not every author currently producing books brings chapters to a nice, succinct close. O’Connor provides closure and never leaves reader hanging or feeling as if they have hit a brick wall when the new chapter quickly takes a new direction. 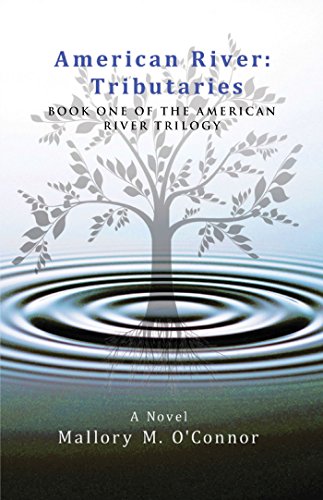 Second chances are not easy to come by, but when they roll around, you grab them and hold on for dear life. No family quite knows the truth of this old adage as well as the McPhalan clan. Kate, Alex, and their mother, Marian, share a bond that unites them in more ways than one. All three women have had a relationship with Carl, and all three of them have found ways to discover love once more. When Kate decides to breathe new life into Mockingbird Valley Ranch, the home in which they all lived as a young family, mother and both daughters are presented with an amazing and unforeseen opportunity to renew themselves and their relationships with one another as adults.

Mallory M. O’Connor’s American River Trilogy focuses on several different storylines surrounding the McPhalan family. These parallel plots play nicely against one another as the book progresses. Readers are treated to thorough descriptions of Kate and Alex’s backgrounds as well as a clear look at Marian’s history. O’Connor includes a lengthy list of secondary characters with their own storylines and this, at times, can be a little difficult to follow.

Set in the 1970s, O’Connor masterfully integrates mentions of now historic events alongside the characters’ numerous dilemmas. She covers everything from the moon landing to the increasing focus on feminism. Each of the events and historical aspects gives the book a richer and more polished feel.

American River Trilogy touches on a variety of difficult topics including post-traumatic stress disorder and interracial relationships. O’Connor deals with each of these highly-charged topics with style and grace. Her characters are genuine and leave readers rooting for them every step of the way.

Alex’s particular story line is tragic and likely the most down-to-earth of any of the characters. The trauma of her past and the way it impacts her present life is a striking commentary on an all-too-common facet of the lives of many. O’Connor’s slow reveal of Alex’s damaged childhood is effective and powerful. As much as I found Carl’s inclination to move through the women in the McPhalan family to be somewhat disgusting in retrospect, I saw a whole new side of him when he came to Alex’s aid in her time of need.

O’Connor’s writing is, what I would consider, specialized. There exists a specific audience for this particular piece. Centered around the arts and focusing primarily on the world of music, there is a plethora of discipline-specific terms and ideas within American River Trilogy. I did not find myself able to relate easily to many of Kate and Alex’s experiences.

Readers who seek historical accuracy intermingled with their drama will appreciate O’Connor’s particular style. Classically-trained musicians and those who enjoy reading fiction with a peppering of music-specific terms will find American River Trilogy the perfect read.