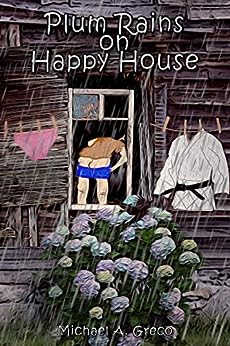 Lawrence Thornberry thinks he is ready for his year in Japan. However, nothing could have ever prepared him for the experience he is about to have. An experience he can never truly understand but astonishingly accepts. He discovers new elements everyday. Some of these strange things would deter anyone but not the Ichiban. A nickname he got because of the room he was assigned, room number one. This American English teacher teaches at the Slop Bucket. When he is not there he encounters strange things at the Happy House. Strange things that are brought on by the rain. Just a good old Japanese experience.

One of the strange but weirdly comfortable things is that this story is told by crow. A tale that slides seamlessly from first to third person and back. The crow has strange characteristics of its own. Note the overuse of the word strange. It is a recurring theme in Plum Rains on Happy House. The crow though not exactly living in Happy House is one of the many eclectic characters in the book. Michael Greco has done a good job of building otherworldly characters but still maintain a light touch. Another grumpy but delightfully humorous character is the Goat.

Oh the words. The author has a special gift. He weaves words into a beautifully crocheted poncho. A poncho that envelopes the reader in pure literary induced ecstasy. An example is that bit where Titty is introduced. It is so funny and accurate, I imagine. The reader cannot help but picture it. Speaking of which, the character development in this book is quite good. Not in a way that one can relate to them but in a way that makes the reader comfortable. The reader feels at home in a house that requires a symbiotic relationship between it and the resident. It is uncanny how that can be possible.

It is truly wonderful that despite the Ichiban noticing some peculiarity as he was trekking up to the house. He kept going. He continued to see the crooked house but it was like he saw something completely different. Like all the strange things were supposed to be part of the experience. It is good to take things in stride like that.

There are two issues with this book. While the language is well utilized, it still requires a bit of polishing. The plot is unique, but the story is confusing at times. Bits that arise abruptly and disrupt the flow of everything. Some people may like this as it brings a little unpredictability to the story.

This is an entertaining book with interesting characters and an imaginative creative plot. All of that and a whole lot of quirk.

I always wished I had supernatural powers. Now I wish I didn’t.

Sadie’s a dud, a failure–the only one in high school who doesn’t have any kind of supernatural powers. Her psychic bff, Jo, knows something about Sadie’s future, but just won’t tell. And what the heck is going on when one of her teachers starts looking at her while he’s going on about powerful lost keys, portals of madness, and destinies?

Then it all starts.

On her 18th birthday, Sadie starts to feel weird. And when werewolves, vampires, and demons all turn up to spoil her party, the weirdness really ramps up.

Leaving her best friend, her family, and the only town she’s ever known, Sadie must find safety. But while the king of the werewolves can offer her somewhere to hide while she’s learning about her new powers, he can’t stop his psycho witch fiancée from finding new ways to try and kill her. Of course, the murderous tendencies of this psycho witch only get worse when she realises the Werewolf King is, um… attracted to Sadie.

And all that’s before Sadie sets off to try and find one of the lost keys. Before she visits hell. Before she picks up a pet ogre.

And before she realizes just how powerful she can become.

But if it really is her destiny to collect one of the lost keys, will she be able control her newfound power and help save the world and all the people in it she loves? Or will she buckle under the pressure?

She’s about to find out. A mansion surrounded by demons and full of vampires and witches intent on her destruction awaits. Oh, and that psycho-witch fiancée of the Werewolf King. What could possibly go wrong?

If you like high stakes, kick-ass heroines, and a solid dash of humour, you’ll love this new Paranormal urban fantasy series by Brandi Elledge. Get it now.