A Sinister Combination of Joy and Pain

Breaking Magic takes place in a world where people are genetically engineered for jobs and no one is able to question their function in society. What was your goal when you started and how did it change as you were writing?

This question is interesting, because I’m not really a plotter. The details of each story tend to evolve as I’m writing, and in the case of Breaking Magic, things changed a lot. What the villain did to recreate the world of Imbera according to his own evil design was more complicated than I originally expected. It allowed me to be quite creative in terms of my protagonist’s journey. My goal was to show that everyone has unlimited potential – no matter what society tells them, or the obstacles they face. That did not change, but the story behind it certainly did!

The story follows Callax, one of the workers, as he struggles to overcome his predetermined life and learns more about the world. What was your inspiration for his character?

Callax is the storyteller, and he shares what he learns and the emotions he is feeling without much of a filter! He gets scared sometimes and he says the wrong thing as often as he says the right thing, but he’s brave and determined too. I wanted Cal to be someone the reader could relate to and care about.

In Breaking Magic the Opta are the ruling class and the Exta are the workers. What themes did you use to develop these two contrasting groups?

The overriding theme is the importance of hope, even in the face of the impossible odds that the Exta are facing. The Opta needed to appear invincible, so their leader, the Breaker, is an intelligent antagonist. The Exta are not allowed to grow up, they are engineered to be only fragments of their potential selves, and his magic uses a sinister combination of joy and pain to disorient them. Yet they never quite stop hoping, and this gives them the strength to fight.

How does this book fit into your Legacy of Androva series and what is next for Callax?

Breaking Magic was a great opportunity for me to take a minor character and bring him into the limelight in a standalone book. I expect that Cal will turn up again at some point, but for the sixth book I am writing Galen’s story. Galen is a seventeen-year-old Androvan magician from Seeking Magic, the third book in the series, who abandoned his world two thousand years ago for love of a Terran girl. I plan to return to the core series in the seventh book! 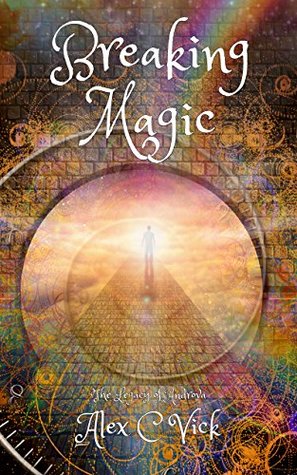 Callax is fifteen, and he already knows he won’t ever grow old. Twelve years after leaving the childstation he will be summoned to the Gathering, where life essences are taken by a deadly, irresistible spell. On his world, this is one of the many ways in which the Exta serve the Opta. His best hope is to avoid an early binding by staying out of trouble.

But in protecting his younger brother Benedar, he was noticed by the Breaker, the evil magician in charge of the Gathering. The closer Callax gets to the ruling house and the girl who lives there, the more he learns, and the greater the danger. A danger he might not understand until it is too late. Callax thinks the Breaker’s defeat will save him, but he is wrong.