It No Longer Surprised Me

My inspiration to write this book stemmed from my own personal experiences on the roadways and highways, having seen and experienced every single offense and type of driver that I mention in the book. When you’re in the center of it all, you get to see all kinds of crazy road blunders and highway flubs. So, why not write about it?

What is a common bad driving habit you run into on your commutes?

One of the most common are the cut-offs. There’s always that cidiot who thinks it’s smart to cut you off so they can make a turn or exit. They are known as the Bully-Turn Bandit and the Boomerang. I see this on a daily basis, until it no longer surprises me.

What is a piece of advice you would give to a new driver?

The best advice I can give any new driver is to brace themselves and beware. It’s important that they master having eyes not only for themselves on the road, but for the cidiots that they will encounter on a daily basis. If they understand and know what to look for, they may be better able to avoid having an accident. However, no driving scenario will ever prepare a person to be perfect and 100% accident-free on the road, but it could lessen the chances of a person either causing an accident or becoming a victim of an accident.

Do you plan to write other books with the same humorous perspective?

I am currently working on another humor book. So stay tuned.

Filled with hundreds of common driving offenses, this gut-wrenching funny handbook features hilariously, jaw dropping terms and phrases describing some of the nastiest driving habits you or another cidiot have engaged in almost every day on the highways and byways. Inside, you’ll find “The Motor Mouth Motorist” who suffers from road rage, “The Para Lane Bluffer” who can’t decide if they want to merge with oncoming traffic until the last second, “The Eye Shadow Bandit” who thinks she’s skilled enough to drive at high speeds while applying makeup in the car mirror, and many more epic adventures of daily cidiot driving habits that are far too many to list here. Whether you’re the culprit or the victim of cidiot driving, The Little Handbook for Navigationally Challenged Cidiots will have you laughing, pouring tears, and showing off your enriched cidiot vocabulary.

Some Kind of Grotesque Thriller/Parody

Sophia von X follows Sabina, who goes on vacation when things quickly go awry, and she’s caught in the middle of an archaeological conspiracy. What was the inspiration for the setup of this thrilling story?

The icon of Christ Pantocrator inspired me. I remember, I bought a history journal, and there it was – an article about Hagia Sophia in Istanbul, describing in detail a famous mosaic of Christ Pantocrator. I thought it would be fun to write a story about this place. I have never been to Istanbul, but other members of my family have visited it, so it was beneficial. I sketched the plot in one day.

Also, I rarely work on big pieces of fiction, but decided to try it, and write a full-length novel, some kind of grotesque thriller/parody on different books and movies. I wanted it to be ‘fast’ like a John Wick movie, but also packed with a lot of female heroes like in Charlie’s Angels, and with a sprinkle of religious conspiracy like in Dan Brown’s books. A taste of everything in one story.

Sabina is an intriguing and well-developed character. What were some ideas that drove her character development?

At first, I tried to write a story about the robbery, but I changed my mind. I created a Sicilian woman who takes a paid leave from her job at university and goes on a vacation with the purpose of visiting a newly discovered tomb of Christianity. The idea was to make the reader wonder, all the time, who she really is. We should remember that life is a mystery, and absolutely anything can happen to us along the road, at any moment… Maybe now?

Of course, Sabina changes because of unusual circumstances, but she is also the one who makes decisions. She is (both) a good guy and a villain. She is broken and the one who breaks. She is the woman and the boss. She is the lover and the hater. She is strong and weak. She is a complex character, but I’m not focusing on her feelings or problems. This is not a psychological thriller; this book is about action and fun.

The word that describes my writing the best is the word random. I do not explain much; I prefer readers to make the necessary connections by themselves, and most important – to think and imagine. I believe this is the primary purpose of reading. If I tell you everything, then what is the point?

I enjoyed the mysteries embedded in the story. Did you plan these, or did they develop organically while writing?

I planned the birthmark story, the twelfth page, and Sabina’s stop at the dig. I needed Thomas von Essen as the ‘slide-character,’ who is involving her in the illegal criminal activity.

I changed the ending a week before publishing, by killing more people. I saved the protagonist’s life, though.

I planted a couple of hooks because I have a ‘hidden’ villain in the team of four. The identity of this person will be revealed at the end of the story.

What is the next novel that you are working on, and when will it be available?

I’m usually writing short stories; that’s why my next book is a collection of surreal humor, mystery, and satirical stories. It will be available in June 2020: as ebook and paperback.

At the end of this year, I’ll focus on Book 2 in my young adult absurdist fantasy series Child of Illusion.

My next big novel is a psychological thriller, Almost Faithful. Hopefully, it will be published in 2021. Here’s the blurb of the story:

Margo and Barry are living the perfect life. They’re happily married (or so it seems), working great jobs, and traveling the world. Ellen and David have it all – the looks, the big house by the beach, a successful business, a grown-up daughter, Marie. But underneath, each couple is in crisis, and there is only one cause. His name is Charlie…

Charlie is a widower with an autistic son. A man with exceptional acting skills, struggling to forget his painful past. A man who is not ready to let go, who is breaking two families and destroying their trust.
Out of options and with their backs against the wall, Margo, Ellen and Marie discover that murder isn’t a tool reserved only for criminals. 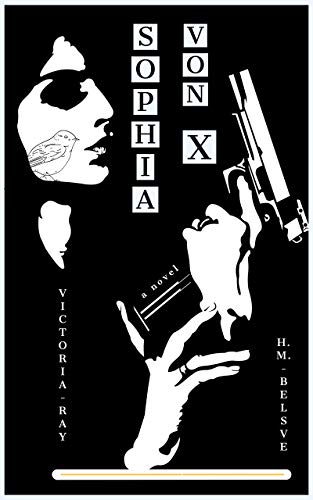 It was supposed to be a vacation, the trip to a newly discovered tomb of Jesus…

When Sabina Ferrara was driving to Bingerbruck, Germany, she was hoping to put a painful marriage behind her. Certain unforeseen events turned against her and during a visit to Christ’s tomb, she is meeting Thomas von Essen – a dangerous thief, who is hiding behind the name of a decent family, pretending that he is a famous archaeologist. Against her will, Sabina is dragged into the middle of the stealing of biblical artifacts, killings, and shootings. She ended up attracting the attention of an unknown enemy from Jerusalem, a wicked man called Papa Zen. A powerful mogul who knows too much about Sabina and her mysterious birthmark. She is the one he was looking for so long…

Sophia von X is a story of violence and obsession, secrets and tragedy, lies, hate, and love.