“Ya know, it’s my understanding that the success rate of funerals is impeccably high.”

The Sounds from the Hills Go Away When the Sun Goes Down is the latest book by author Dave Matthes. I very much enjoyed the style and tone of Dave Matthes’s writing. The story is about what Matthes describes as “an examination of the present moment during a fragment of time in the lives of several of what society considers downtrodden, gutter-decrepit, low-living, and expendable, taking place in a corner of the world most only have fleeting nightmares about.” In the story, we follow several characters. Wendel Trope battles his anxiety attacks with alcohol, Jerry, the owner of the run-down hotel where the story takes place, Bush Betty, a prostitute, and Lotus, a young girl struggling with her past. This collection of characters creates a strange community that holds each other up. The relationships between the characters were one of my favorite parts of this story. The peculiar and subtle interaction of people who haven’t known each other long but are connected by struggles and traumas.

The morbid humor of the book fits perfectly with the setting and the characters. That being said the subjects of this book are pretty dark, including a suicide early on, so if you find yourself triggered by these kinds of subjects this might not be the book for you. The way Matthes deals with these emotional subjects throughout the book is done with a gritty artistic class. He is not afraid to talk death, addiction, and mental illness, subjects that are often considered taboo to speak about. Matthes deals with them in a relatable and real way. They are apart of peoples lives, even if society would prefer to ignore it. The matter of fact tone of the book allows life to stand on its own two feet, not shied away from or glorified. This story was a whirlwind to read as it took me on an emotional roller-coaster. The story itself really captures the moment in time aspect where there doesn’t need to be a grand arc because it is simply a fragment in the lives of people. I very much enjoyed reading this intense book and look forward to delving into more of Matthes’s extensive collection of works. I would definitely give this book five stars and would highly recommend it.

Nate knelt beside the dead girl. This wasn’t his first homicide, it wasn’t even the first dead prostitute he’d investigated. It wasn’t the first strangling death he’d been assigned to. But, this one bothered him.

Maybe it was her youth, she appeared to be in her early twenties. Maybe it was her looks, as death had yet to rob her of her beauty. Maybe she reminded him of his own daughter, Lizzie, who was only a few years younger. Maybe it was something else entirely.

The big detective looked over the body, careful not to touch or disturb her. He had one of the best crime scene technicians, Winston Rawls, and he did not want to make his job harder.

“Look at her fingernails,” Rawls observed from the other side of the body.
“What about them?”
“Most of them are broken and some are torn free of the quick. Some are missing.”
Nate slowed his visual scanning of the girl and focused on her hands. Rawls was right, the nails were ragged, broken, and torn. Some of her fingers ended with just the bloody fingertips.
It made his injured finger hurt. Maybe this was why this murder haunted him from the start.

The girl’s hands were bagged in plastic to preserve evidence that hopefully was there. Gently, Nate lifted a hand, holding it on his open palm. He looked at the girls eyes, that looked down and away from him.
“I don’t know what happened that led you to this place. I don’t know why you chose to live the life you did. But you deserved better than this.”
Rawls looked at Nate with an expression that asked, “What are you doing?”
Nate glanced at the technician and then focused again on the girl’s hand.
“I promise you, I give you my word, I will find who ever did this to you and I will bring him to justice. I will hold him accountable for this. Rest assured.”
Gently, as if he didn’t want to wake her, Nate lowered the girl’s hand to the pavement. He stood and Rawls stood with him.
“Do you want to tell me what that was all about?”
Nate studied the bearded tech, “I made her a promise.”
“Nate, you and I both know solving the death of a streetwalker is one of the hardest crimes to solve. Unless she was killed by her pimp, or another girl jealous of her, the doer is a complete stranger. There’s just not enough to tie the two people together.”
Rawls shook his head, “You’ve worked more of these than I have. You know how difficult this is going to be.”
Nate looked at Rawls, placed a hand on the technician’s shoulder, “I made her a promise.”
He turned and walked from the alley, giving the technician a controlled wave, “See you at the morgue.”

The Tenth Nail is the story of a homicide detective obsessed in finding the killer of a streetwalker. It is fast paced, with well developed characters and a twist at the end most will not see coming. 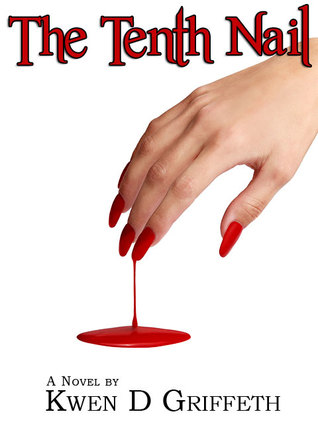