Captive Threat is a genre-crossing novel with elements of espionage, mystery, and crime as well. Did you start writing with this in mind, or did this happen organically as you were writing?

I began the novel with the basic plot and ending in mind but the plot got more complex and took unanticipated turns as the issues and characters developed. As a writer my view is you have to know where you’re going but keep an open mind as your characters and plot take on a life of their own.

The characters in this novel, I felt, were intriguing and well developed. What was your inspiration for Wade’s character?

What I enjoyed most in this story was the portrayal of complicated human emotions. What themes did you try to capture while creating your characters?

Much of the emotion in my characters comes from their unique personalities and how they interact under different levels of threat. The two main characters throughout the series are Wade Hanna and his co-agent and lover, Megan Winslow. Their relationship as agents often tests their personal relationship as lovers. In each novel I try to bring out the best or worst of their professional relationship and how that affects their personal relationship. Always ups and downs but in the end they are there for each other although not in the ways obvious to the reader. In many instances, Megan, for example takes the lead and can be stronger than Wade. She brings to bare a unique, tough feminine prospective to a clever, instinctive approach under the devious watchful eye of, Leo, the Black Ops commander.

This is the fifth installment in the Wade Hannah series and it leaves me wondering, where will Wade end up now?

Wade and Megan continue as a team in the sixth novel. Currently, I have two more novels planned for the couple as they continue their heart throbbing assignments while maintaining their personal relationship. The novels will venture on different types of assignments in different countries as they engage political espionage and mystery as they face an uncertain enemy and each other. Each novel will test character flaws of team members. Novel 6 has the added burden of Megan’s physical recovery from wounds suffered of her near-death experience in Captive Threat. Beyond the next two novels is unplanned and anybody’s guess. It may be another episode with these characters or an entirely new set of characters and plot. Stay tuned. 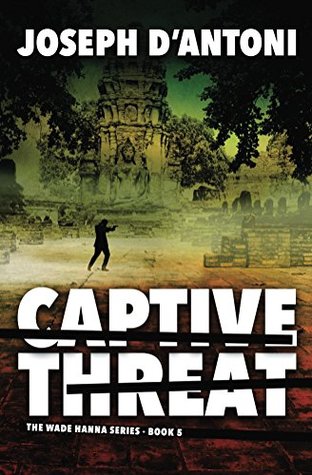 As the Vietnam War concludes an MIT professor, contracted to the NSA, leaks U.S. military secrets to the world. He is now America’s #1 traitor. Abducted by Soviet agents, he and his family are traded to North Vietnam.

Wade Hanna’s partner and lover, Megan Winslow, is forced into a witness protection program run by Army Intelligence. Haunted by PTSD flashbacks of her last mission Megan discovers she is being used as “bait” for another covert operation.

Escaping the witness protection program Megan finds sanctuary with Wade in the deep swamps of Louisiana. Wade is selected to head the mission to capture or terminate the #1 American traitor. To avoid being left behind in the swamp Megan must convince Wade she is fit for the new mission.

Wade’s covert intelligence team infiltrates the guarded jungle monastery where the professor is being held only to find their team is vastly outnumbered and outgunned by the opposition. Planned extraction of the target becomes impossible as Wade’s team faces imminent termination of the entire squad.