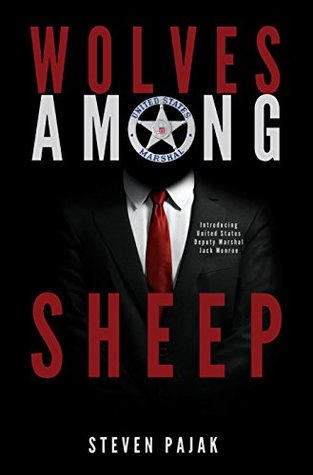 There is madness in the world that few can ever understand. What drives a person to get out of bed in the morning or take a life in the evening is different for every person. Steven Pajak carefully crafts a story for us that involve mindless torture; endless agony and that special breed of mental instability psychological thrillers enjoy so much. While Wolves Among Sheep is meant to be a book introducing Jack Monroe, a United States Deputy Marshal, it really focuses on the relationship between Jack’s brother Michael and unstable, disgruntled former employee Robert Elliott Lang. As readers we are roped into a fascinating situation where a single man seeks to completely destroy the life of another for reasons only he could possibly understand. With heart in throat and eyes glued to the page readers will want to desperately know the why and crumble when it’s finally revealed.

Pajak knows his craft well and is very good at describing the slow, torturous break down between Robert and Michael. Michael has the things that Robert wants and is seen to be the one who has denied our antagonist all that could have been his. Robert desperately needs help and the signs pointing to his devolution have been visible for a long time. Perhaps it’s because he’s just another name in the email directory or because he’s that difficult, creepy guy that no one really wants to befriend but the fact remains that Robert does not get the help he needs. Instead, he gets a target: a person whose life he can work towards crumbling as carefully as possible. We know quite early on in the tale that Robert is a man who is not below putting dead rats in cars and forwarding incriminating emails in order to destroy a relationship. We know all of this but the hypnotic destruction pulls the attention and causes us to question what we read.

If there were to be any areas where Pajak could improve it would be simple editing. There are a few spelling mistakes and words that are potentially mistyped. This is not Pajak’s first time at the rodeo so he knows how to write a good story. That is what makes the minute, yet noticeable, editorial issues stand out even more. Unless you’re extremely particular about these sorts of things they will not ruin the story for you, but they will be obvious.

Wolves Among Sheep takes its readers on a dangerously slippery trail. There are aspects of Robert’s behavior that seem almost normal; those small little tics that are easily over looked. While Jack is instrumental in hunting down Robert after he has successfully destroyed any semblance of a ‘normal’ life for Michael, the story truly revolves around our protagonist and antagonist. The tale would not be the same if Jack were not in it, however, so it is important to note that his existence is necessary to reach the conclusion Pajak came to.

Readers who enjoy a good psychological thriller along the lines of Dean Koontz and Stephen King will not be disappointed with the creepy tale Steven Pajak offers for consumption.