Chaste: A Tale From Perilisc 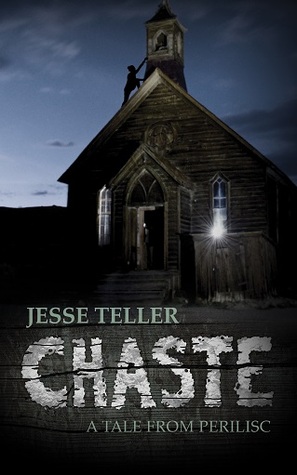 Chaste is the third book by Jesse Teller in the Tales from Perilisc. In Teller’s prior book, Legends of Perilisc the god Cor-lyn-ber is mentioned the father of Hope and Light; Chaste focuses on Cor-lyn-ber and his followers in the small town. The town of Chaste is a remote town dedicated to Cor-lyn-ber that has been overcome with a deep sickness. Five strangers to the town arrive and all their destinies take a turn. The book is dark and filled with detailed violence. It is not for someone looking for fairies and elves. The theme of rape, abuse and murder run though the whole book revealing a dark and sick society struggling to find the light again.

The main characters are Father Frank, Cheryl the barmaid and self-appointed watcher of the town, and the five strangers, Ambul, Ruther, Sai, Sob, and Trevonne. Cheryl watched her parents die, her mother and battle and her father murdered. They were the religious leaders for Cor-lyn-ber and Cheryl from that point on lost all faith in her god. The first half of the book is all about the devastation of the town, the murders of their children, the sickness and evil that penetrates the land and people. The reader learns little about the five strangers only getting pieces of their history bit by bit. Trevonne is wizardass in training, she arrives in the town of Chaste weak and sick. Sob, an assassin and thief has taken on the role of protector of her. Ruther appears to be the leader of their group with a no nonsense mentality. Ambul and Sai call themselves brothers but they are not related. Sai is known as the great swordsman and dreams of a woman each night where they continue their love saga from afar. Ambul is referred to as the gentlest and good man known to man. He is an innocent and pure of heart, with a secret past.

The five strangers arrive in the town right after the death of another child. They all feel there is a wrongness in the town. The first night there Sob is out looking for jewelry to steal and comes in contact with the killer of the children. She recognized there was something evil and not human from the start but wasn’t staying around to investigate further. Meanwhile, back at the tavern and inn Ambul goes missing after a fight with Sai. The fight was brought on out of nowhere, the towns sickness already infecting them with its poison. From here the story of finding their missing friend, discovering the source of the sickness and purging the town of the poison is told.

The story of Cheryl is key to the novel, and she goes through a drastic transformation. Like all major transformation in life hers is a hard story and she learns lessons of pride and sacrifice. She also learns just how much control the gods of Perilisc have over her life and that of the world around her. She learns that her destiny is set by them, not herself. She must face her past, and Cor-lyn-ber himself.

Overall this book is not for the reader looking for a happy ending fantasy novel. This is fantasy at its darkest. Abuse, demons, and torture are key themes and some are described in vivid detail. If you can get past all that, the story is one of transformation, overcoming evil and delivering justice.