Taking Zombies Back to Their Voodoo Origin

Voodoo Child follows Army chopper pilot Maggie Child after she’s shot down over Iraq and her well-ordered life spirals into a paranormal nightmare. What was the inspiration for creating a zombie novel with such a strong female protagonist?

The positive feedback I’ve been getting about Maggie is really satisfying because it was kind of an outside the box decision. I thought moving away from the standard male action hero would give the books a unique perspective. The zombie genre tends to have main characters that are either Delta Force operators, or Joe Everyman heroes who blossom into post-apocalyptic commandos, so I wanted to go in a different direction. With Maggie Child I wanted to create a protagonist that was strong and capable, while still being emotionally vulnerable. That’s especially important given what she has to endure over the course of the book. Maggie is a trained soldier but her compassion and embracing her spiritual side will become her greatest strengths. I think she’s someone readers of both genders can get behind.

Maggie, Sarafina and Lavonia are the three main characters of this tale and they couldn’t be more different from each other. Which character do you feel you relate to and why?

Well each of the trio represents a distinct facet of human nature, with Maggie as the person of action, Sarafina as the spiritual and emotional conscience and Lavonia representing our basest instincts. I suppose Maggie is the one that I and probably most other people would relate to. We all hope that if a great duty were thrust upon us we’d rise to the challenge like her. I think it will be fun to watch her blossom from a good, strong person into a truly great one. BUT I freely admit that Lavonia is always a blast to write because she’s such a shameless, self-centered sociopath. She’s irresistible.

There are a lot of zombie novels out there. How do you feel Voodoo child stands out from the rest?

The biggest difference was taking zombies back to their supernatural, voodoo roots. The current wave (or tsunami) of zombie novels are inspired by George Romero’s Night of the Living Dead, which reinvented zombie mythology. Thanks to Romero’s influence literary and cinematic zombies have evolved into thoroughly modern monsters, usually the byproduct of a mutated virus, military experiment or some other consequence of our technological society. That’s ironic because zombies are actually rooted in traditional Caribbean Voodoo- a very agrarian culture that hasn’t changed much in centuries. Taking zombies back to their voodoo origin allows me to explore the rich tapestry of voodoo spirits and legends. Later novels in the series will dive more deeply into that realm. It also meant I could discard the current “Zombie Rulebook” while inventing my own mythology. I think readers will enjoy the ride. Another difference is focusing on a core group of female lead characters, both as heroes and as the main human villain. I think that casts a unique light on the genre. I enjoyed exploring the characters relationships, particularly with Maggie, who, coming from an army background is very guarded about her femininity and romantic relationships, whereas the Sarafina, the Voodoo priestess is completely guided by her heart and emotions. They make an unlikely duo that not only forms a deep friendship, but also bond as master and pupil. And finally there’s the slightly twisted humor that underscores the action, which I hope is a welcome addition. Maybe Voodoo Child is the zombie novel for people who are growing weary of zombie novels.

Voodoo Child is the first book in a series and it does an excellent job of setting the stage for the story to come. Can you tell us more about where the story and characters go after book one?

We’ll discover that the supernatural forces at work will embolden other Voodoo spirits to come forward and assert themselves, turning the island of Fantomas into a brave new world of gods and monsters. This includes Marinette- The Lady of the Screech Owl, a spirit from the traditional Voodoo pantheon that’s considered so horrible only an insane person would evoke her. Pages from the ancient Voodoo spell book have been scattered across the globe, placing great power in the wrong hands. Sarafina will try to use her portion of the ancient text for good, but she’ll struggle with the book’s power to corrupt even the purest of hearts. Maggie will be grappling emotionally with her new role as a more than human warrior. To achieve that she’ll have to embrace her spiritual side, which isn’t easy for someone who, until recently, was a professed atheist. Plus (without throwing in too many first book spoilers) Both Maggie and Lavonia will be struggling with some severe mommy issues. The US Navy is heading for Fantomas to quarantine the island and render aid to its citizens. That won’t end well at all. Plus Talos Corporation is still in the mix and another rouge nation (not mentioning any names) has its eye on Fantomas. And of course Lavonia wants her lost money back, even if that means unleashing a zombie army to do it. It’s going to be full of fun, surprises… and monsters.

Army chopper pilot Maggie Child has a reputation for being fearless, professional and, above all, rational. But when she’s shot down over Iraq her well-ordered life spirals into a paranormal nightmare. Alone, wounded and surrounded by hostile forces, Maggie is rescued from certain death by a demon straight out of Dante’s Inferno. Then, barely alive, she’s abducted by a private military corporation conducting insidious medical experiments. Her escape from their covert hellhole lands her on a Caribbean island where an evil voodoo spirit and a psychotic female dictator are conspiring to unleash an apocalyptic zombie plague. Then she uncovers the most terrifying secret of all—her own destiny. It seems a Voodoo oracle has ordained her the only warrior capable of saving humanity from a supernatural Armageddon … whether she wants the job or not! But saving the world isn’t a one-woman job, so she teams up with a trio of unlikely heroes—a conspiracy obsessed marijuana smuggler, a Voodoo priestess with an appetite for reality television, and a burnt out ex-mercenary. Together, they’ll take on an army of the walking dead, with the fate of humanity resting in their eccentric hands. Voodoo Child, Book One: Zombie Uprising is the first novel in a new horror series packed with supernatural thrills, rousing adventure, dark humor, Voodoo lore and plenty of zombie stomping action. But a word of warning; don’t shoot these zombies in the head … because that just makes them mad! 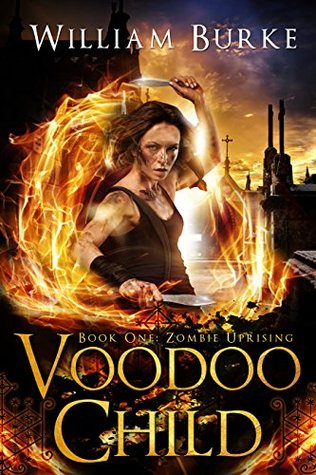