It’s Not So Easy to Escape Adventure

Boone and Jacque: Cytrus Moonlight continues the saga of two friends who have grown up together and now, as adults, wind up investigating a murder together. What was the inspiration for the setup to your story?

The murder case was meant to be something that tugged at Jacque’s heart strings while feeding his need to solve a mystery. In addition, corner Boone and Shammy into participating but with their own reasons. Being to protect and keep their family together. They said they were done with adventures, but it’s not so easy to escape adventure.

As for what exactly was the inspiration, I wanted something a little more neutral. Something that would give me room to explore the psychological side of Boone, Jacque and Shammy. Though I did focus more on Boone, I will balance that out in the final book.

Are there any emotions or memories from your own life that you put into your characters life?

The biggest one I will share, which was incorporated in certain scenes and lessons about love, is the memory of me being involved in a romance scam. Last year, a so called woman Sonia Daniels, manipulated me into believing she was a real person. Even though I never met her, heard her voice, or seen her on video chat. There was something spellbinding about her personality and how she talked to me that kept me in her control. In fact, I was so in love with her, that I was completely distracted at my day job. So much so, that when this person gave me guilt trips, I genuinely felt guilty for hurting her. I can’t believe I was head over heels for someone I don’t know. Let alone feel bad when I hurt their feelings.

When I came to from the spell, I “broke up” with her then blocked her from all forms of communication. Even then, this person was able to make several fake profiles on social media, phone numbers and emails. Reaching out to me, pleading for my attention and love. It’s as if all the work they did being undone drove them mad. Being in this so called relationship drove me mad as well yet I ended up valuing true love and trust even more.

Because in order for love to be true, you need trust, time face to face, common interest, share everything, hide nothing, embrace each other, care and support one another, be there through the good and the bad, and lastly, understand that love is complicated.

I guess, through the process of writing this book, the fear of not having true love was a strong inspiration. I’ve never felt that before. Or at least I thought did at one time. But she didn’t feel the same way. That’s ok though. Because true love is mutual.

The other emotion was one that I used to have. One that came from a time where I was a sheltered kid who didn’t know if he’d ever have a purpose. Or if he had one, could he do something great with it. But through writing this series, I realized telling stories is my purpose. It’s the only thing that made sense to me. Whatever day job I have, is simply something to keep me fed. Not happy. Telling stories makes me happy.

What was one of the hardest parts in Boone and Jacque: Cytrus Moonlight for you to write?

One of the hardest parts for me to right was what happened to Gene towards the middle of the book. Which I won’t spoil for those reading this. All I can say is that I never experienced this myself, but I do know about trauma and that some suppress those memories.

Another part that was hard to write was the fight Boone and Shammy had. I never wrote that type of scene before because I hadn’t really thought about any fights I’ve had with a life partner. But when I thought about my first relationship, the times where I got mad, frustrated, scared by my partners actions or words, the scene just came to me. It even came into play for the little spats Jacque and Xantia had.

There is one more thing that was hard to write. More so at the beginning. When I was first writing this book, it was slow going. I felt disconnected from my characters. Probably because I was lost in my own life. Plus, I had just ended my so called relationship with Sonia Daniels. I just couldn’t figure out why the town, Cytrus, and the characters weren’t connecting. But once I started talking about my life with friends and family, asking for help with research on certain elements of the story, it all came together and I fell back in love with the characters.

What is the next book in the Boone and Jacque series that you are working on? Can you give readers an idea of what to expect?

I am working on the last book of the series. In which the subtitle is: Sahon. I was going to write a sixth book, but I know their arc will conclude in this storyline. Meaning they still have room to grow after this series, but more as secondary characters or passersby in other books.

As for what to expect, it will be more philosophical and psychological. Boone and Jacque will be somewhere terrifying yet mesmerizing. As for what will happen to them, or what will become of them, you’ll just have to wait and see. I will also have interlude chapters to wrap up loose ends in Cytrus and show what is happening with the other characters. This will be the hardest book I’ve written, yet the most rewarding.

Boone and Jacque are back again in Boone and Jacque: Cytrus Moonlight! It has been 15 years, and they are living their best lives. Boone got married to Shammy, and they have two amazing children together. Boone and Shammy just want to live a life of peace and quiet. Jacque, on the other hand has become a detective and loves his job and his woman named Xantia, who happens to be a detective as well. Boone and Jacque still have a very strong friendship, but their lives turn upside down when a new mysterious murder happens. This throws Jacque and Boone into a new quest that they never wanted. They just want to live their simple lives.

The new book in the Boone and Jacque series is stupendous! Readers that have enjoyed prior books in this series will be blown away by the new characters and adventures. AG Flitcher takes readers on a magical and fantastical adventure that surpasses prior novels, going in a completely different direction and showcasing the growth of Boone and Jacque. In addition, this an inclusive novel. Jacque, Xantia, and Coralie are all part of the LGBTQI+ community.

Jacque and Xantia are a wonderful couple. Xantia was a great addition to the group and is a strong woman. Her character is well developed and fits perfectly into the story. Coralie is new as well, and I learned a bit about her, but I do hope to learn more about her in the next book. Reading about Boone and Shammy’s children is delightful; they add a new demension to the storyline. Boone’s character is still growing and figuring himself out, but I can say he is a loving father. It made me happy to see his character get some happiness after the childhood readers learned about in past books. Having Shammy to share his life with gives his story the joyful component he had been missing.

I still have some questions, but I imagine the next book will answer them. AG Flitcher seems to be very good at wrapping up loose ends. The story overall was well written. While I have my questions about Dr. Button and Jacque’s aunt and uncle, I am sure I will get my answers over time.

I give Boone and Jacque: Cytrus Moonlight 5 out of 5 stars. This novel felt very different from the others, but I can tell it is leading up to similar adventures with an extra twist. I look forward to the next book in this amazing series! 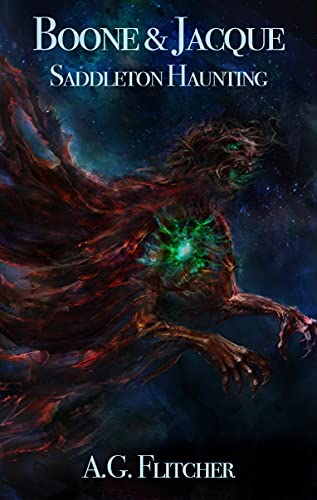 Boone and Jacque: Saddleton Haunting by A.G. Flitcher is the third book in the Boone and Jacque series. There have been reports of a blood-sucking, red werewolf-like spirit appearing in the town of Saddleton, nightmarish to every being who encounters the ghastly living curse. Boone, Jacque, and Shammy, now orphans working under the rule of their new king, along with others, are sent on a journey aimed at retrieving that which will ensure the eradication of the town from this looming spirit. Hardly do they know their mission is more than simply a search for answers to an external cause, and they are constantly going to be accompanied by love, rifts, anger, and uncertainty along the way.

This engaging fantasy novel is replete with dreamlike elements. There is an eight-legged, four-eared, diamond-eyed, flying squirrel, and a house that is completely covered with tea cozy’s. Furthermore, there are flying rats, ink-black water, and bizarre rules and regulations at the Saddleton orphanage. The environment is surreal and amusing but also bizarre and amazing at the same time. The little details given to the habits and mannerisms of children in the orphanage are very well thought out. Whether it’s the girls giggling at the entrance of boys or the boys bickering and using rude language, the intrinsic traits of teenagers are evident. Ultimately, the relationship that develops between the ever-inquisitive Boone, reserved Jacque, and clever Shammy was something that was endearing to me. In addition, I enjoyed the author’s inclusion of modern-day topics in this urban fantasy novel, including feminism and homosexuality.

Some parts of this novel reminded me of Harry Potter and the mystique of the world is conveyed well. There are so many creative elements in this story that young adults fans will surely enjoy, such as the throbbing W mark on Boone’s chest, a half-alive demon feeding on an animal to gain strength, except in place of a  wand we have a powder that is intriguing in itself. As a Potterhead, I find this link amusing, and I think young adult fans will enjoy the connection, but I would offer a word of caution; there are some gory scenes and rough language used. But if you are not bothered by that then you will certainly enjoy this story.

The novel stirs up many emotions. There is anxious anticipation of the cursed living spirit, pity for the helplessness and loneliness of the orphans, and regret for what they have endured. Additionally, the empathy extends to Boone and Jacque, the two orphans with a dark past, who face difficulty venting their feelings. Boone and Jacque: Saddleton Haunting is a thrilling paranormal adventure story that will appeal to readers looking for a dark but fun story.