The Consort Conspiracy follows Kate who travels to to Georgia to cover a story only to get embroiled in the towns dark history. What was your inspiration for this thrilling novel?

The inspiration for this novel is actually one of my favorite parts of the story. While I have been a writer in some form or another my whole life, I had never done much with it other than a couple of short stories and poems. But I visited the Midway Cemetery in Georgia–yes, it’s a real place–in 1997 because I knew it contained the graves of signers of The Declaration of Independence and the U.S. Constitution. I went there for the history. But as I wandered the oldest part of the cemetery, I stumbled upon the Robarts family plot with death dates in the early 1700s. One grave was for the wife of William Robarts and right next to her grave was that of Ann Evelyn Robarts, listed as “The Consort” of William. My first thought was indignation, since I interpreted “consort” to mean “mistress” (my research later told me, however, that “consort” was simply another name for “spouse”). My second thought was of deep sorrow when I read the epitaph that stated she was only seventeen-years-old when she died and was buried with her two infant daughters. Immediately, my mind started spinning with a myriad of jumbled thoughts that ranged from “Oh how horrible to die so young with so much to look forward to,” all the way to “This happened so long ago…how could anyone today be certain that these deaths actually happened the way it’s written here…what if one of the little girls had lived?” I felt so strongly about it, it was as if Ann Evelyn, herself, had reached out from the grave. A story began to take shape in my heart…and it was one I knew I had to tell.

This book was filled with lots of great twists. Did you plan these or did they develop organically as you were writing?

The main twist about Kate’s ancestral roots was the first one I thought of and, in fact, in the very first iteration of this story–written long hand on four yellow legal tablet sheets for an early writing class–developed that one twist and only covered the crypt and its contents. As my writing instructor and friends encouraged me to expand on the story, I knew that more things needed to happen and be intricately woven together. I needed to figure out what caused Katherine to die at such a young age in the first place–yes, women did die of childbirth all the time back then, but that was too easy–and not very exciting in a thriller. So the reason Katherine died led to the story line of not only the circumstances prior to her death, but also of what catapulted the Penningtons into the most powerful political position in the world. And once that happened, the events that transpired to bring them karmic justice–family come-uppance, if you will–also spawned a story line. All of the other twists simply presented themselves to me “organically,” as you said, in the course of the writing.

I enjoyed how each character had their own voice and was meticulously developed. What were some themes you wanted to capture while writing your characters?

I really love it that you asked that question because as a writer, one of my fears has always been that people will think my characters are shallow. I have been thrilled to find out that’s not the case. The characters in the two-hundred-year-old story were probably the easiest to write because I believe they follow typical character themes from the period–the strong, silent “leading man” who was a pillar of the community until he experienced his downfall, the sweet naïve young bride/mother who steadfastly refused to believe there was evil in any of her associates, the evil-doers who were only out to benefit themselves, regardless of the cost to others, and the salt of the earth folks–primarily Jewel, in this case–who kept things moving with undying love and loyalty and a steady hand. One of the characters I especially enjoyed writing was Lucilla, from the older story. One of my editors suggested I tone down her surliness and some other aspects of her character, but I fought to keep her the way she was. She needed to do everything she did in order to maintain at least semi-equal footing with Caleb in their sinister plot. Kate’s character had initially been written in a more literary style–more formal speech and fewer glimpses into her internal insecurities. But when I turned in a writing assignment in an advanced writing course using a “girlfriend ” type voice, my instructor wrote on the top of my paper that she really liked that voice and that I should incorporate it into my writing. So I did…which also led to a massive re-write to change Kate’s part of the story from third person POV to first person POV. And after that, Kate became much more fun to spend time with.

My next book is the first in a new series about two new families–the Sinclairs and the Maguires–and takes place in North Carolina, just a few miles east of Asheville–I’ll pick back up on Kate and her friends in a later book. We are still negotiating on this one, but expect it to be out in 2018. Here’s a teaser:

In 1947, JEFFREY SINCLAIR, hidden in his family’s mansion, sneaks from his safe place on his eighth birthday and witnesses his father’s murder. Almost seventy years later, MATTIE MAGUIRE the fourth generation of the working class family whose lives have been intertwined with the wealthy Sinclair family, attempts to fulfill her lifelong fantasy of buying the old mansion. But her plans fall apart when she learns that the mystery shrouding the earlier murder has also clouded the identity of the property’s true heir. Worse, in her research to clear the title, she uncovers some troubling information that points to the involvement of her beloved grandfather, MICHAEL MAGUIRE, into the earlier murder that, if made public, would put her whole family in danger. Suddenly, nothing matters beyond protecting her loved ones and clearing her family name. It’s up to Mattie, accompanied by an unlikely source, to unravel her grandfather’s involvement, discover the true Sinclair heir–hidden away for decades–and return him to his rightful place, where together, he and Mattie finally reveal the family’s long-held secrets, along with the identity of the true killer.

For almost two hundred years an ancient cemetery, deep in the lowlands of Georgia, has protected the identity of an infamous, brutal murderer, whose act of betrayal changed the course of the town’s history. Now, eight generations later, MIDWAY CEMETERY conceals the activities of international conspirators engaged in a fast moving counterfeiting ring operating right under the noses of the slow-paced Midway residents.

Thirty-one-year old Bostonian KATE COVINGTON travels to Midway to film a documentary intended to increase the favorability ratings for the current United States President, WILFORD PENNINGTON, who was born in Midway and descended from the murdered victim from two hundred years earlier. As she becomes enthralled with the town’s history, Kate uncovers the truth about the murder of the President’s ancestor. Her discovery also leads to her learning the truth behind her own mother’s death and eventually changes not only the town’s history, but Kate’s future as well. 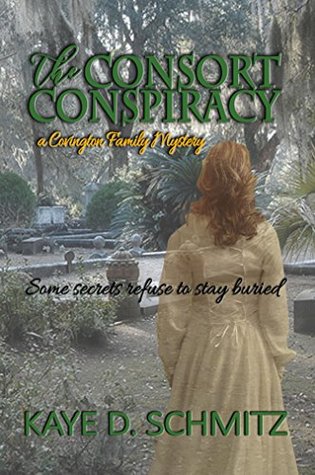