William Corgel is a clairvoyant medium who is hubris, doubts his faith and a heavy drinker who finds comfort in pills. Believing there is nothing he can’t handle he soon finds himself in a home with a demonic presence and the possession of a teenage girl.The demon continually taunts and attacks him while claiming to know William’s suppressed childhood memory centered on his mother. 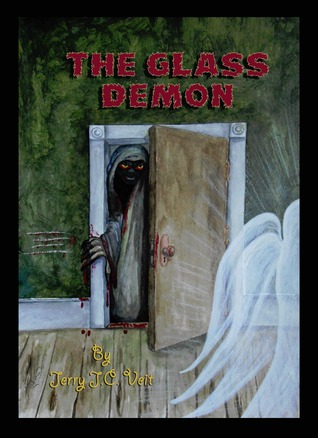 William Corgel is a paranormal medium and investigator who is suppressing a deep secret from his past. His life is full of supernatural complications, hauntings, and demons that possess innocent families. His job is to help people pass on to the other side, allowing a home to become free from spirits. When William comes across the Glass family, there will be a supernatural presence that will be unlike anything he has ever encountered before. Will William be able to face the demons of both his past and present or will this finally be the haunting that pushes him over the edge?

The Glass Demon, written by Jerry J.C. Veit, is a supernatural novel that dives into the world of spirits and hauntings. Not for the faint-hearted, The Glass Demon has themes and events that will have your heart racing until the very end. At times I felt so involved in the story that I had to check around me for any mysterious supernatural activity! Jerry J.C. Veit has a brilliant way with words that makes the reader feel as though they are in the room observing the action themselves.

One of my favorite characters in The Glass Demon is a woman by the name of Angie. She protects and helps the Glass family and is determined to stop the demons in her way. Her presence is a relief at times of absolute chaos and I was always grateful for her appearance. I enjoyed watching how her character developed throughout the novel and how her relationship developed with each of the characters.

The Glass Demon deals with problems of the present mixed in with secrets from the past. William has had a complicated life, from a difficult childhood to an unusual career path as an adult. His avoidance of his childhood demons leads him to develop an addiction to booze and pills in an attempt to mask the deep issues he is suppressing. This suppression may lead to his downfall as he is forced to acknowledge and remember shocking secrets that led him to become the person he is today.

The story is written in a play style format, complete with Acts, character lists, and a synopsis. There are segments which are like the normal format of a novel which allows the author to set the scene for the reader, making it easier to transition into the scripted sections. The “scripted sections” actually made the novel extremely easy to read and flowed naturally throughout the story.

The Glass Demon has a taste of religion, supernatural history and even a dash of exorcism thrown in the mix. The rich history of demonology presented in sections of the novel give The Glass Demon a sense of realism, adding to the spooky nature of the story. With such a thriller of a storyline, I could definitely see The Glass Demon being turned into a movie!
I would recommend this to anyone who loves a thriller/supernatural style story that will keep you on your toes.