Trying To Hide A Dead Body

A Labyrinth for Loons follows a man who’s stuck in Malaysia during a COVID lockdown and begins to question his own identity. What was the initial idea behind this story and how did that transform as you were writing the novel?

This story was unique in that I really had no idea where it was headed. At first, I was simply going to chronicle daily life, as I was genuinely stuck in KL (from February to September of 2020) and couldn’t return to Japan—as I had to babysit the cat. The daily diary turned stale, though, and since I do write fiction, I began running ideas through my head on how to turn this predicament into something more adventurous than it actually was.

The set-up for the story, the characters, the location—it’s all true, as that’s where I was living. The cadaver that comes along, of course, is fiction. I’m not sure if this qualifies as an “idea” but I’d simply always wanted to write about a protagonist trying to hide a dead body—one that would not cooperate. I mean, what writers, don’t, right?

The chaos with the travel visa was inspired by a novel I read in May of 2020 called Transit by Anna Seghers. The issue of identity that plagues the lead, Leonard Smith, may have developed some from another novel I read that summer, The Talented Mr. Ripley by Patricia Highsmith. And all the nihilism that permeates the story—well, that’s just me. But I’d be grossly misleading if I also don’t mention the impact of House of Leaves by Mark Daneilewski. (Hence, the minotaur.)

Leonard Smith goes on a transformative journey. Is this intentional or incidental to the story you wanted to tell?

I’d say that Smith’s journey is the story and everything else is incidental. As he struggles with the act of assuming the identity of someone who has died, he slips into a kind of psychosis, exacerbated by his isolation. He begins to see the cadaver that he’s agreed to store in his living room cupboard as not dead at all. What’s really happening is that he’s questioning his own reason for living, and this question must be answered by his metaphorical minotaur. His understanding of the influences of religion impacts his journey, too—the Islam of his host country and of the other characters; the Buddhist ideas within the Donovan song There is a Mountain, and his attempt to understand why the mountain disappears and then returns—a realization that comes from an understanding of oneself.

I find that authors sometimes ask themselves questions and let their characters answer them. Do you think this is true for your character?

Yes, definitely. Leonard Smith’s questions are mine. He’s on a journey, and his inner struggles with identity and core beliefs lead to a kind of psychotic crash. He survives it and comes away with a more contemplative outlook on his world.

The next book is a sequel to my first novel called The Cuckoo Colloquium. I’m not sure what we’re going to call it, but it’ll be out on Amazon in January of 2022.

Writer Leonard Smith wants to go home, but he’s stuck in Malaysia’s Kuala Lumpur during Covid lockdown, and the airlines seem haphazardly selective about who flies and who doesn’t, based on the type of travel visa one holds.

While waiting for the opportunity to get out, Leonard agrees to look after the belongings of another tourist—the Kiwi—who’s committed suicide. The dead man, also a writer, has written a bizarre manuscript concerning real-life accounts of a brutal minotaur housed within a labyrinth. Before he realizes it, Leonard finds himself in custody of the embalmed corpse, storing the dead man until he can be transferred for burial in another city.

Through a bureaucratic screw-up, Malaysian authorities confuse Leonard with that of the deceased Kiwi—who possesses just the right kind of visa. Is Leonard capable of assuming the false identity of the dead man for a chance to go home?

Getting desperate while holed-up with a wily cat, a 13-year-old house guest who could possibly be homicidal, and a dead man in the closet—that at times doesn’t seem all that dead—Leonard slips into profound questions of his own identity.

The only way to find answers is in the labyrinth—where the minotaur waits. 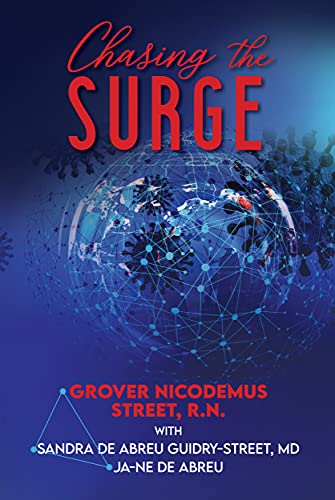 This pandemic has been strewn with misconceptions from the vaccines, to the medications that could “cure”, to the ways we infect others with the virus. The truth comes to light through the eyes of an American travelling nurse, Grover Nicodemus Street, in Chasing the Surge. Mr. Street, a former US Air Force Trauma Nurse who now travels America working in hospitals in almost every kind of medical scene imaginable, recounts his day-to-day life during the first year of the pandemic. He talks about his up-close and personal experience with the virus, what he and his family went through to survive, and the emotional struggles he went through as a person in the medical field. Mr. Street explains in detail the importance of wearing a mask, sanitizing and distancing; teaching us what happens to our family and friends who disregarded these safety measures. During his recount of the past year, he has described multiple times how this pandemic is a war in and of itself.

This compelling medical memoir is conveyed in a diary-like structure. The timeline of the story jumps around, from a hectic hospital setting into Mr. Street’s childhood. This disrupts the straightforward narrative and instead we’re given a story that is well balanced between some heavy emotional subjects with some lighter ones. It creates a less depressing atmosphere and lets us get to know Mr. Street, what his motives are for sticking around during this crisis, and why he is an incredible nurse.

The story is fast-paced, and for the most part it covers lots of activity that keeps readers engaged. The story does have some medical jargon that makes the book feel authentic but could go over the head of a layman, but the author does explain the less well-known terms and phrases to help his readers along.

This is an amazing and endearing story that is sure to address people’s questions and insecurities about the pandemic. If you are still stuck at home, you should learn a little bit about why that is. This book is an absolute must-have on your nonfiction reading list this year.

Parenting in a Pandemic

If we said 2020 was anything less than an incredible strain on all of our lives, we would be deemed as liars of the worst possible kind. Parenting in 2020 changed in what, quite literally, felt like an instant. Overnight, parents across the world were suddenly tasked with educating their children, finding ways to provide social interactions for them, and explaining to them why their world had turned upside down. Life during the pandemic of 2020 has impacted parents everywhere in ways most cannot sufficiently put into words. Despite the mania created by the Covid-19 pandemic, there are ways for families to cope and move forward with life–ways to create a new, and hopefully, temporary normal.

Liz Bayardelle, author of Parenting in a Pandemic: A Parent’s Guide to All the Roles We Have to Play in the Era of Covid-19, takes a closer look at the impact the pandemic of 2020 has had on parents with school-aged children and the multiple roles they have assumed. While providing examples along with hints for successfully addressing their children’s many needs, the author uses well-intentioned and appropriately proportioned humor to lighten an otherwise somber mood and dense subject matter.

As a teacher and parent of a 2020 high school graduate, I more than appreciate Bayardelle’s candor. From the practical advice for staying healthy and following suggested health guidelines to ideas for time management, the author covers all necessary bases and provides solid, easy-to-follow advice that can be instantly applied in the home.

Not enough can be said for Bayardelle’s use of humor. There has been very little opportunity for smiles and laughter over the last year. It has been difficult to find moments of levity when trying to balance fear with daily routines and the barrage of changes with a craving for normalcy. Bayardelle’s willingness and efficiency with lighthearted moments placed strategically throughout the text helps readers face the challenges of our new reality with a little less grimness.

Parenting in a Pandemic is the book we all needed and for which we never dreamed we would have to search. Bayardelle breaks down a tremendous amount of information in a short, well-organized, and engaging read. I highly recommend Bayardelelle’s guide to any parent looking to navigate the waters of parenting in this pandemic while waiting patiently on a return to what may be our new normal.