Music is an incredible force, with the power to unite people of all backgrounds over universal themes and make every kind of situation seem valid and surmountable. It also can inspire, as it does here for Ryan Becker in his poetry collection Euphoric Wonderland. Sprinkled with great references to many bands and a plethora of iconic songs, Becker creates a roadmap through his imagination, using the music he loves as the most important landmarks.

The book’s prologue is an open letter to the music and the artists that sparked the journey for Becker, giving a brief idea of what clicked for him as he listened. It focuses heavily on The Beatles, who have been well-known inspirations to countless writers, artists, and other musicians since their time. These open letters, which contain their own distinct rhythm and read as times like confessions, continue to pop up periodically throughout the book, simultaneously praising and paying homage to the music Becker has discovered.

The poetry itself is expressive and captivating. I feel that the rhyming pattern was distracting, and I would’ve liked the poems to be more free-flowing. One of the appeals for writers and readers alike is the freedom to construct a thought outside the traditional writing restrictions, especially when it comes to poetry. Becker does a fantastic job conveying emotions in his poems, making them a powerful read. One key thing the author does well is references the music that has presumably inspired his writing. There is a great deal of music history hidden here, called out either in names, song titles, and personal stories of the artists. He is masterful in discreetly incorporating things that may not be obvious in his writing. This is a nice treat because there is something new to find in Becker’s poetry, especially when read more than once.

I immensely enjoyed finding all the musical references throughout though I am sure I may have missed some. Poetry is hugely subjective and personal when it comes to the level of enjoyment, for any music lover these entertaining poems will inspire you.

Euphoric Wonderland is a humorous and engaging collection of poetry. The musical reference will bring on feelings of nostalgia for older generations, and serve as a rich and diverse introduction to younger generations that may not be as familiar with the music that inspired the works here.

The poetic style used by Carl Hare in Archer: On the River of Time is not only appealing to read, but also striking. The author’s sophistication when writing, and the flow of the narration display a different level of literary writing. As a lover of poems, I was amazed by how exceptional Carl Hare is when linking narratives and arranging the words. Every poetic line gets one to appreciate literature and gets the reader deeply immersed in the book.

We follow the life of Ray Archer, who is a fictional Canadian actor and director. His life revolves around overseeing productions, analyzing performances, giving directives and seeing through acting projects among other things. As Archer follows the King Lear tour across Canada, he experiences a variety of curious events that will inspire the readers imagination and keep you coming back to see what could possibly happen next (I suppose much like Odysseus’s story). Things get progressively more interesting as he tours Ireland where Archer must face the changes taking place in his life. His life changes dramatically and that transition is something I was enthralled with; and was certainly something that called me back to this book again and again. The author uses both modern and traditional poetic styles in this spellbinding story, which was a great concept that was executed well, as this made the reading more colorful. The vibrancy in the authors words, tender narration and composure can be felt from the first page.

I enjoyed reading Archer’s story as much as I loved Odysseus and Spenser. It is incredible how Carl Hare managed to intertwine stories from the three characters while still being able to give each character their individual story.

Archer: On the River of Time is an entertaining novel that will get readers to appreciate poetry, mythical stories, and historical fiction as well. The phrases, literary stylistic devices, diction and engrossing tales make this book a must read. This brings a fitting end to an epic trilogy that I found to be eloquent and insightful. With an enchanting writing style and intriguing characters this is easily a book, and series, I would recommend to fans of epic, or ancient, poetry.

Organic eMotions is a thoughtful poetry collection by Lali A. Love. In the opening section, the author presents a myriad of emotions that emphasize the mighty force within every individual; the raw power held within the Divine Feminine is one of the recurring themes which the author majestically illustrates with her verses. The following section, Emotional Vortex, focuses on intrusive feelings and their impacts on one’s well being. The third part is entitled Clarity and contrasts the negative emotions that are introduced in the pieces from the former section with insights on solidarity and human nature. Especially touching are the validation of one’s journey in Reciprocity and the dismantling of virile stereotypes in Divine Masculinity, as well as the positive affirmations throughout the latter poems in this part. Finally, Purity paints several tranquil pictures – from the cleansing provided by a running current in Water to the grounding and sensible words in Complete Being – that illustrate its namesake.

This stirring piece of literature is a fantastic read for those seeking a rousing and incredibly relatable poetry anthology that reminisces of Rupi Kaur and Amanda Lovelace. The cheerful, upbeat attitude conveyed in the collection will feel familiar to readers who struggle with daily life issues such as anxiety and insecurity, as well as collective problems that permeate modern society.

Readers will be thoroughly refreshed with Lali’s contagious positivity, a welcome surprise that, more than once, drew an inconspicuous smile on my lips. Delight, one of the final poems, perfectly conveys the uplifting power of this book.

Furthermore, one cannot fail to mention the masterful paradox that is constantly approached as a central motif in several moments in this collection: Lali notes how small humankind is when compared to the vastness of the universe, while also praising the universe within every person.

Organic eMotions is a simple but vastly compelling read that is sure to appeal to readers of all ages who seek a gateway from the routine and a dash of positivity.

The Empty One: The Fallen Conviction 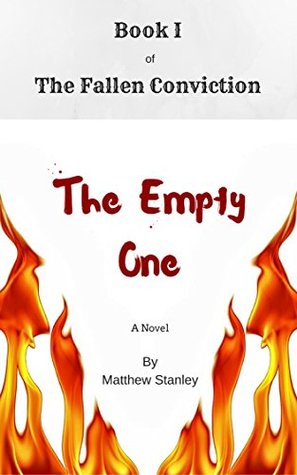 If there’s one thing I can guarantee about this book, it’s that you’ve absolutely never read anything like it before. And that’s no small thing—fantasy as a genre has a bad habit of being predictable, and this book certainly is not that. If you’re looking for new form, experimental writing, and a very unique voice, then this is the book for you.

The form is really intriguing: it’s written like a cross between the Bible and Beowulf, with annotated lines and a very deliberate rhyme scheme (all the lines are end rhyme, which is certainly unique in the modern fantasy genre market). The book is biblical in the sense that a lot of the sentence structures seem to mirror the historical books of the Bible, i.e. “1.2.29 For whosoever believed in other than Lialthas was surely deviant, as was the plain truth as seen by his narration!” The text is also reminiscent of Beowulf in that it has a very tried-and-true formula of an “epic”, with a lot of focus on character development throughout the story. Quite a few of the names have pseudo-Scandinavian roots and the focus is very much on masculine honor, value, etc.

The actual plot is a bit hard to follow, which is the only thing I wasn’t crazy about in this book. Typically, fantasy novels are very plot-driven and follow a certain pattern, but this book completely breaks that pattern (which, don’t get me wrong, can be very good sometimes, but I’m not sure if it works here). The central idea is that there are two groups of people who worship two different gods: the Alakans worship the goddess Akala (who are presumably the good guys), and the others worship Lialthas (definitely the bad guys), and they wage a centuries-long battle that, on the surface, looks like a religious war, but, as we continue to read, we learn the reasons for their fighting are much more complicated. The plot moves incredibly quickly, with at least one major plot event per five pages, so anything beyond that will be a spoiler alert. Suffice to say there is quite a bit of action—it is an epic, after all—and definitely not for the faint of heart, since there are definitely some violent and gory scenes. If you’re a fan of old Norse mythology or Anglo-Saxon epic poetry, you’ll feel very comfortable reading this.

That typical “pull” you get from regular fantasy books is still lurking here, but it’s a bit more obscured than, say, Lord of the Rings or A Game of Thrones. I found myself staying up late because I was so engrossed in reading the book; however, not for the typical reasons I would with other novels… more because I appreciated the uniqueness of the structure and freshness of the author’s voice than the fact that I was attached to the characters or really cared about the movement of the plot. Readers who feel bored with the current state of the fantasy genre: this is for you.

Overall, I’d absolutely recommend this book if you love fantasy but would like to move outside of the typical fantasy novel and into something more unique (“avant garde fiction”, if you will). Even if it’s not something you may personally enjoy, I can definitely see this being a great read for a reader who wants to learn more about using narrative poetry and other old-school fiction elements in modern fantasy.