They Had a Common Enemy

The Poseidon Network follows SOE agent Hadley who must root out a traitor in the network before their cover is blown. What was the inspiration for the setup to this exciting novel?

I wanted to show that for SOE agents working on behalf of the Allies, the situation in Greece was not easy. The political situation in Europe prior to and during WWII was very much one of division, and nowhere more so than Greece which had experienced great upheavals in their country in the early 20th century. However the Greek Resistance did pull together while they had a common enemy and their part in defeating first the Italians and then the Germans was to be admired. Women also played an important role too, as they had done in every war since The Greek War of Independence in 1821.

I also wanted to write the novel that was more a thriller in the style of Film Noir and the old classics, rather than another resistance story. The melting pot that Cairo was at that time was an ideal starting point. Characters in Rick’s Bar in “Casablanca” along with Harry Lime and his Viennese Nazi sympathizers in “The Third Man” were an inspiration too.

Larry is an interesting and well developed character. What were some driving ideals behind his character development?

Again taking inspiration from Film Noir I wanted Larry to be a larger than life figure; a man’s man who loved women, yet was caught off-guard when he met Alexis. I tried to imagine the physiology behind such a man. He was, first and foremost, an adventurer, but all of us have a vulnerable human side – a soft spot. Alexis was his. I also wanted to show how he respected the men he worked with. The classic thriller writers and such authors as Steinbeck were a great influence for developing his character.

I enjoyed the historic details used throughout the book. What kind of research did you undertake to get things right?

I always try to get to know the places I write about. In this case, I lived in Greece for six years and heard stories from those who experienced the war firsthand. I have also visited Turkey and Egypt several time. I think this is vital as the atmosphere of a place gets into your blood. It is the sights, sounds and smells that touch the senses and give the novel light and shade.

My current WIP is another WWII story set in the Jura/Franche-Comté region of France in 1944. I was there for two and a half months 2019-2020, researching the Maquis, Resistance, and smuggler routes into Switzerland. It is a beautiful area of lakes, forests and mountains, and rich with stories of heroes and heroines in almost every village. Unfortunately, the Germans – particularly the Gestapo – could not have infiltrated the area so successfully had not been for the many collaborators, who were paid a huge sum of money for denouncing someone, particularly the head of a network. This time the protagonist is a woman. I expect to have it out by September this year. 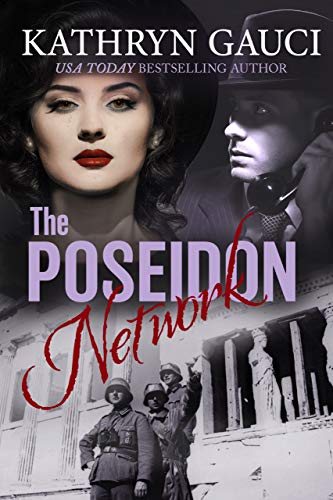 1943. SOE agent Larry Hadley leaves Cairo for German and Italian occupied Greece. His mission is to liaise with the Poseidon network under the leadership of the White Rose.

It’s not long before he finds himself involved with a beautiful and intriguing woman whose past is shrouded in mystery.
In a country where hardship, destruction and political instability threaten to split the Resistance, and terror and moral ambiguity live side by side, Larry’s instincts tell him something is wrong.

After the devastating massacre in a small mountain village by the Wehrmacht, combined with new intelligence concerning the escape networks, he is forced to confront the likelihood of a traitor in their midst. But who is it?

Time is running out and he must act before the network is blown. The stakes are high.

From the shadowy souks and cocktail parties of Cairo’s elite to the mountains of Greece, Athens, the Aegean Islands, and Turkey, The Poseidon Network, is an unforgettable cat-and-mouse portrait of wartime that you will not want to put down.