Apocalypsia details a post-apocalyptic Earth. Demons comb the land and what is left of humanity struggles to survive and trust one another. What was the inspiration that made you want to write such an immersive story?

I had a lot of time on my hands (haha). I was in my early twenties, worked two days a week, living in my parents’ basement, and was addicted to video games. Writing was my way to keep my mind active and a way to escape my uneventful reality. It started out as some dark and depressing poetry (some of which appears in the book). I felt like the only way I could find meaning in this world is if it ended. That was the idea that sparked Apocalypsia. I wanted to go on an adventure, and if I couldn’t live it, I could at least create it. I also drew inspiration from authors like Edgar Allen Poe, and Charles Dickens, and stories like Beowulf and Lord of the Rings.

This story is a fun blend of science fiction, fantasy and post-apocalyptic. Did you plan the novel before you wrote or did this happen organically?

I was told to always know the ending of your story before you begin. Apocalypsia was the exception. I had no idea where this story was going to go. At times I felt the story was telling itself and I was just the messenger. I never thought about what will come next only what was happening now.

In its infancy I wanted to make Apocalypsia a graphic novel. I wrote it into twenty-five separate books in a little over a year and a half. Since I cannot draw or know an artist that could take on this huge project I rewrote it to read more like a manga, but without the art; since I was into Japanese anime at that time. About a year later I developed a love of screenplays and the desire to write them. Apocalypsia was rewritten again into three different scripts due to its length and the 80-120 page constraint of a normal screenplay. When I discovered self-publishing the book that exists today got another overhaul. The book gained new content and became a little darker too. I was older so everyone in the story had to grow up also. Overall it took seven years and several rewrites before Apocalypsia appeared in our hands.

What is your writing experience and how has that helped you write Apocalypsia?

I actually wrote all of my books as screenplays first until I learned about self-publishing. I reformatted my screenplays into novelized script versions by taking away all the screenplay lingo, headers and directions, but kept the name of the speaker before my dialogue to cut down on “he said” “she said” throughout the entire story. Screenplays taught me about plot points and showing not telling. I learned to write a good ending and a good beginning and then finding out how to link the two. I learned how to write books by thinking about them as movies. Usually screenplays are the product of books. My books are products of screenplays.

I have started writing a steampunk story. I think that will be a cool genre to explore. I have the beginning written and several notes about the world, technology and devices that exist, and character backgrounds and personalities, but I’m still working on the plot so no release date in sight yet. 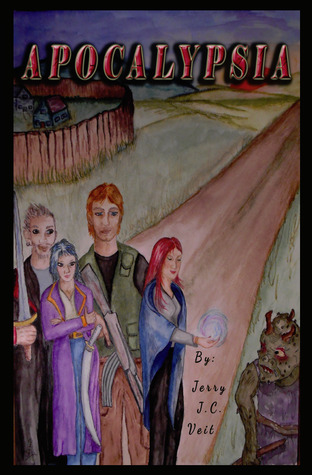 Much of civilization lies in ruins after the mysterious happenings of a demonic uprising. In this post-apocalyptic world survivors must scavenge for supplies while taking up arms against demons, goblins, and even each other.

When an ally’s fort is attacked; a small group of survivors take it upon themselves to unite and stand against the further spread of demons. Along the way new allies agree to stand with them. Encountering stronger demonic threats and the discovery of an ancient artifact, which could destroy the boundaries between Hell and Earth, causes a collision of the human resistance into an epic final battle with the demonic forces.

Apocalypsia by Jerry Veit is a saga in the best sense of the word. I was able to read the complete edition of this work, which consists of three books and three parts per book. They detail a post-apocalyptic Earth after what appears to be, for all intents and purposes, the end. Demons comb the land, freed from Hell and what is left of humanity struggles to survive and trust one another. It is left to small bands of warriors to come together and unite the warring factions, otherwise they will all perish with the rising of a new demon army.

The vision that Veit has for this world is expansive. It is also a fun blend of science fiction, fantasy and post-apocalyptic. These elements may seem to much for the casual reader but for Veit they are all ingredients that lend themselves to the epic that this work is. The edition I have, has a couple, very thick appendices, which was helpful for the wide cast of characters Viet details in all of these stories. Some of the terms, locations and overall history of this Earth is also given. All in all the world building that Veit skillfully brings to life is very present and rich for the reader to sink into and lose themselves.

I found Veit’s prose to be stilted in places and I wonder if his work would hold up better in an audio book or audio drama form. He did not shy away from any action and made sure the story kept moving through these pages, especially as the conflict became more and more intense until the dramatic conclusion. He does follow the time tested formula of having a band of hero’s and a singular villain, bent on destruction. The setting he built around this formula is what refreshing for this type of tale and the considerable scale he chose to write it in. The story itself could have been confined to two books but with drawing it out into a third he was able to deepen the plot just enough to please the reader. I won’t say anything else in that regard, lest I spoil the story.

What was difficult was the way that Viet chose to tell his tale. He took some grammatical liberties that a seasoned reader may have trouble reading at first. The most notable one is that Veit does not use traditional dialogue tags or quotation marks but instead uses names labeling who speaks (i.e. ADRIAN: Welcome to Apocalypsia). This is similar to how one labels dialogue in screenplays, which I am aware is in Veit’s background.

All in all Apocalypsia is an epic tale of loss, bravery and learning what it is to be human. Lovers of quests and end of the world tales will find something to enjoy here.