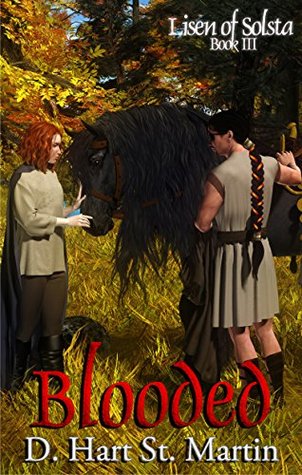 In the final installment of the Lisen of Solsta trilogy, Blooded by D. Hart St. Martin takes us on a gruesome journey as we learn how Lisen as Empir of Garla will affect the future of the Garlan people. After ascending to the throne, Lisen must make major decisions while facing her own physical and mental battles alone, especially when she’s captured by rebel Thristans for a period of time. On the verge of a devastating war, Lisen and the holders of Garla face the bloodthirsty Thristans in a battle that reveals the truth of the hermit’s prophecy and whether peace can ever truly arise between the two nations.

In Blooded, the concluding piece of the Lisen of Solsta series, Lisen becomes Empir Ariannas—without Korin at her side, though, she struggles with this new sense of authority. As a result, Nalin becomes a vital figure who assists Lisen with developing the knowledge and skills needed to rule over Garla, and he becomes even more important when Lisen is captured by rebel Thristans. Blooded also follows Korin’s return to his homeland, Thristas, and he experiences his own dilemmas, as he realizes his connection to Lisen is much deeper than he originally thought—in this world, where gender norms are shattered, men or women can carry a child, and Korin is carrying his and Lisen’s baby (unknown to Lisen).

Hart St. Martin’s impressive fantasy world construction throughout the entire Lisen of Solsta series kept me so absorbed in the story that I couldn’t put this last book down—I had to know how the series ended because I felt genuinely invested in these carefully-constructed characters. For example, along with everyone else in Garla and Thrista, Lisen resembles a human, but she has a flat chest, a furry belly, and a marsupial-like pouch. In Blooded, we learn more about the “unpouching” or birthing process in this world by witnessing two important “outcomings” or births. St. Martin makes these moments suspenseful and full of emotion by showing two birthing events from different perspectives.

While Korin is raising his and Lisen’s child in Thristas, Lisen faces her own mental struggles when she realizes that the Thristans are planning to go to war with Garla. This climactic moment in the plot, where Lisen and her Council devise a plan for war, showcases the dynamic development of both Nalin’s and Lisen’s characters throughout the series.

During Lisen’s abduction by the rebels, Nalin becomes a strong-minded, confident leader, commanding Lisen’s Council to make major decisions in Lisen’s absence. On the other hand, Lisen sets aside her typical sarcastic, sassy attitude and at times she reveals her emotional turmoil a bit more, as she feels overwhelmed by death piling up around her and the possibility of war. Bala, a significant character from Tainted, becomes instrumental to the plot of Blooded once she’s granted a spot on Lisen’s private Council—when the Garlans go to war, Bala shows her true colors as an assertive leader for her troops.

It’s rare to find a series of books that keeps your interest until the very end, and the end of Blooded and the Lisen of Solsta series left me feeling a great sense of closure. With characters that felt so real within a uniquely constructed fantasy world, this series captures the best aspects of the fantasy genre while also pushing the genre’s boundaries through constructing a gender non-conforming world.

Defiance on Indian Creek is a quiet, but enthralling read by Phyllis A. Still. We follow a smart, courageous thirteen-year-old girl, Mary on the frontier in West Virginia on the eve of the Revolutionary war. Her father comes home with news that disrupts Mary’s world; talk of loyalty to the unfair King and moving to far off Kentucky. The relationship with her father is stretched as she finds him mired in plots and implications of possibly being a traitor or even a spy. Mary is forced of her own loyalties to her father, family and country as the weeks go on until she is asked to make an impossible choice.

Overall, Still has clearly done her research in this fine YA novel. In the tradition of historical fiction before it, Defiance on Indian Creek takes a quiet frontier family and throws them in the forefront against an increasingly dangerous time. Reading these pages gave me the feeling I was actually there in the reeds of Indian Creek alongside Mary and her Papa. The maps included at the front of the book were helpful in understanding the setting and getting even more of a feel of what this era felt to those early colonists.

It isn’t often such a tale is spun on the frontier, but also invokes the greater happenings on the east coast. Mary is a fun protagonist to follow as the story progresses, because Still is able to give the reader the feeling of anguish from the girl and her struggles over choosing to place trust in her father and the lack thereof.

Being a YA novel the story itself is pretty straightforward and does not beat around the bush when it comes to finding out certain things. Mary herself seems to grasp things beyond her years, but her parents are not the usual inept adults that are so often present in YA novels. And being a young girl, who genuinely wants her father to be okay and her family to be safe, the reader can only root for her.

There are few books that I could remember for the relationships it creates between characters, but Still has managed to make the daughter-father relationship in this book a special one. Especially, since the tension between them is so palpable as the book goes on.

If there is any criticism for the book that can be offered it would be for something that is almost uncontrollable. It concerns the background conflict between the Colonies and the Crown. This is what gives historical fiction its flavor, but it does overshadow the very personal, family struggle between Mary and her father. This is the only real issue with the storyline, beyond this Defiance on Indian Creek will be a pleasurable read to any person who enjoys YA and a painstakingly researched historical fiction.