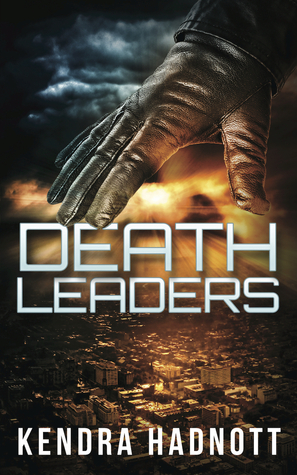 It’s 2031. Crime and violence plague the city of Chicago. The government constantly tracks its people with small hardware implanted into each citizen’s neck. At the same time, another organization, possibly even more powerful than the US government, is working in the shadows – completing their own macabre agenda. Chris, once a homeless orphan, is rising quickly through the ranks of this organization. Having been adopted by a very old man who is well-known throughout the organization, many are jealous of Chris and his high pedigree, making it even harder for him to perform his grave responsibilities.

In this way Kendra Hadnott sets up what happens next in her delightful new novel Death Leaders, a tight, well-written yarn. Death Leaders is Hadnott’s 6th novel, and is a work from a writer with experience, insight, and imagination. The writing and dialogue is fluid, allowing you to simply become engrossed in the story. Her characters’ emotions and actions are believable and empathetic, you find yourself rooting for Chris and then questioning if you should be. And lastly, the dystopian setting and story keeps you enthralled throughout.

After receiving a confusing new assignment related to a young local woman, Chris begins to take careful first steps, knowing his reputation and future in the organization depend on it. As he becomes more acquainted with this girl, he begins to sympathize with her, wondering about her past and becoming smitten by her good looks. But as he continues moving forward, he realizes that someone else, possibly from his very own organization, is stepping in and complicating the situation. He doesn’t know why someone is interfering or even how far up the organization’s ladder this conspiracy goes. Is it just jealousy of his father, or is it something else? After turning to his friends for help, he realizes that even they are keeping secrets from him.

In the same vein as Hunger Games and Divergent, Hadnott creates a not-so-average teen who is trying to make sense of his personal life, as well as how he fits into a larger system. Death Leaders is well-written and gripping. The characters’ backgrounds, feelings, and motives are well fleshed-out, and the setting is appropriately creepy, tinged with a dark side that is just enough. This definitely has crossover appeal – enjoyable for both young adults and parents alike. This isn’t just a novel that revels in the dystopian worlds that are so popular right now. Sure, the setting is exciting and fascinating – a dismal future, where the population has little freedom and where certain random ‘life’ events aren’t quite random. But, like the Hunger Games trilogy, the real appeal is the focus on characters’ emotions, actions, and motives. It’s all just set in an incredibly detailed and rich backdrop that keeps us wondering what will happen next.