Water by Caroline Allen takes readers on a spiritual journey following a journalist named Pearl, who has worked jobs in America and Europe. She discovers mysticism when she meets a medium as a way to retake control of her life. Pearl explores the abuse she endured from her parents, nuns in the Catholic school and her nonchalant boyfriends. She fights to find her purpose in life. She is supported by her close friends and spirit guides who advise her on decision-making about career and love life. She becomes a Reiki healer, tarot card reader, dream interpreter and adds more spiritual skills to her bucket of metaphysical abilities.

Water, while a work of fiction, educates readers about various spiritual and metaphysical practices, and shares illuminating experiences, all from a medium’s point of view. From this captivating novel, readers will understand why people choose to embrace their psychic abilities and learn about their grounding principles in communing with the spirits. One of the primary lessons learned is that psychics are averse to drugs, alcohol, violence, abuse, and other forms of negativity. It is for this reason that psychics interpret dreams and act as healers; they have a deep sense of needing to help others. What makes the plot of this intriguing novel interesting and immersive, is how well the characters are created. They are well defined and their experiences are vividly described. Reading this absorbing story will transport readers into the often misunderstood world of psychics.

Author Caroline Allen uses strong symbolism when describing Pearl’s dreams and possessive visions, and premonitions. Flashbacks are used in Peals journalism writing, keeping the plot unpredictable and engaging. It’s impressive to see how she meshes themes of abuse, religion, divinity, career, poverty community, and relationships into a spellbinding but cohesive story. This hodgepodge of themes helps the reader understand the chaotic life that Pearl is living and why she is determined to find peace, even if it means leaving a job she is successful at.

Water by Caroline Allen is a riveting novel that will resonate with readers who are interested in mysticism and spiritually. It will also appeal to readers of women’s fiction and those that have a curiosity about divination and philosophy.

Epiphany’s Gift follows one young girl through her life as she struggles to cope with an extraordinary gift. What was the inspiration for her gift and the struggles she faced?

As a child, I had several powerful “visions” and/or paranormal experiences. Because the experiences were so exciting and so unusual, I was surprised to find that when I talked about these experiences, adults didn’t want to hear about it. They told me it was my imagination. Or worse. So, I stopped talking to anyone and kept my experiences to myself. Later, I began to read about other people who had unusual “visions.” I began to study the writings of religious mystics and found many similarities to my own encounters with “another level of existence.” In 1979, I met a psychic medium and we became friends. Although my “mystical” experiences were not the same as her “impressions,” we found we had a lot in common and have remained friends ever since.

I really enjoyed the well developed character in the book. Was there anything taken from your own life and put into the story?

Along with my childhood experiences, I included a number of “autobiographical” elements in the story. One is my work as an art historian and my fascination with artists such as William Blake and his visionary illustrations, especially the works he did of Dante’s Inferno. I also incorporated my interest in Asian art and culture in the character of Maro Guido, an art crimes investigator who is half Japanese. I wanted to explore his views about art from a non-Western perspective. And, I set Epiphany’s Gift in southern Ohio where I lived for four years while attending Ohio University. I was fascinated with Appalachian culture and wanted to immerse myself in the area and its special landscape.

This book blends several genres exceptionally well. Was this your intention or did this happen organically while writing?

When I first started writing Epiphany’s Gift, I intended to create a series of stories that combined paranormal events with art crimes. I wanted my readers to understand the problem of art theft and the significance of taking cultural treasures out of the public arena and into private collections where they are only seen by a few individuals. I believe that art has a lot to teach us about how our civilization developed and why we are who we are. So, I think that art belongs in a larger world that is open to the public.

But I also wanted to explore the issue of climate change and environmental degradation. I was encouraged by Dan Bloom, a climate activist and editor of the Cli-Fi Report, to explore various aspects of global warming and its consequences in my writing. In Epiphany’s Gift I take on the issue of fracking and its consequences. In subsequent books, I plan to focus on a number of climate-related issues including the spread of tropical diseases, effects on water resources, and catastrophic weather events.

So, my stories will be about paranormal events, art crimes and global climate change. Something for everyone!

When will this book be available and where can readers pick up a copy?

I’ve just sent the manuscript off to the publisher, so I expect the book will be available in May or June 2019. It will be available on Amazon, through Archway Publishing, and on my website: www.mallorymoconnor.com. Hopefully, it will later be available at libraries and bookstores. Connect with me through my website and I’d be happy to answer questions.

For thirty years, Epiphany Mayall has worked as a psychic medium in the small Spiritualist community of Cassadaga, Florida. But when she returns to her childhood home in Mt. Eden, Ohio, to visit her aging mother, she finds that the rural community is reeling from a series of alarming events. The pristine world of her childhood is being destroyed. Wells and creeks are polluted, and earthquakes have become a frequent danger.

Epiphany’s former professor and mentor, art historian Dr. John Bernhardt, believes that the problems are the result of fracking operations that are being carried out by an energy corporation in the region, and that someone from the company is also connected with the disappearance of an illustration of Dante’s Inferno from the university museum. Bernhardt writes an article for the local newspaper about his theory, but the next day he is found dead. When John’s ghost appears to Epiphany and tells her that he was poisoned, she becomes determined to find the answers to several questions: who is responsible for the environmental disaster, who stole the illustration of Dante’s Inferno from the university museum, and who murdered Professor Bernhardt?

Aided by art crimes investigator, Maro Gaido, and by Blake King, an eccentric local artist, Epiphany tries to put together the pieces of a disturbing puzzle, but finds her efforts thwarted at every turn. Even a State Senator cannot help. As the earthquakes escalate, Epiphany begins to wonder if even her psychic gifts are enough to find the answers before it’s too late to save her loved ones from disaster. 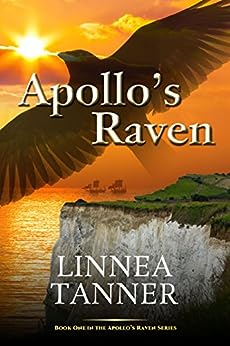 When a historical fantasy grips you from the very first page, you know you are in for an excellent read. With Apollo’s Raven by Linnea Tanner, we are brought into the world of the not-so-distant past when Rome set their sights on Britannia. We follow the experience of our protagonist Celtic princess Catrin and her star-crossed Roman lover, Marcellus. On opposing sides of a battle that grows fiercer with every passing day. There is more to this tale than love and war for magic and mysticism are part of the lifeblood of our characters. This is more than a tale of might and magic. This is also a tale of a woman coming into her own as a powerful warrior and a strong mystic. Catrin has faced uncertainty and hardship even within her own family. When pitted against the Roman Empire will she find the strength she needs to survive?

When you write a story that has its base in history, research is a must. You cannot simply write whatever you wish and hope that it makes sense. Tanner realizes this and does her best to research her time period. How people acted, how they dressed, their beliefs and their mannerisms are carefully reviewed in this tale. At the end of the book she does acknowledge that the Celts did not leave much written history. This is a blessing for a writer though, because it leaves an open creative license. Since they didn’t keep records, who is to say that the druids did not behave in exactly the same way they did in this book? This is where the fantasy aspect comes in. Tanner is careful not to get too carried away and the tale feels believable and relatable.

Tanner begins each chapter with a brief excerpt. This gives the reader a sense of where the story is going. This can be a useful tool when you take long gaps between readings. While there is some slightly graphic content, a teenager would find this to be a friendly reminder of what is about to happen and can help jog the memory if they haven’t picked up the book in some time.

The way Tanner portrays women in this book is also very empowering. Our protagonist is a princess, yet she is not fragile. There is no Snow White here. She is forged with fire and metal and trains to be able to reach the pinnacle of fortitude her eldest sister has. For a young woman who is trying to figure out where she belongs in her world, this tale is relatable to other young women in our timeline who are also trying to figure out where they belong.

If you’re looking for something entertaining with a fast, action-paced rhythm, Apollo’s Raven by Linnea Tanner is a definite must. The first in a series this book firmly establishes backstory while also being able to stand alone if necessary. It’s a very exciting read and readers of all ages and genders will find something to identify with in this tale. How will things turn out for Catrin? What will happen with her relationship with Marcellus, scion of the Roman Empire sent to oppress her people? You’ll have to read and find out.