Embellished is a relentlessly entertaining fantasy novel following a trio of teens as they are catapulted into a video game. What was the inspiration for the setup to this exciting novel?

I truly love online gaming and at one point I was thinking how awesome it would be to visit those antiquated worlds. I am also an R.N. and in my career, I have come face to face with death, more times than I care to admit. I love to write…its who I am, and on one particular day, for no credible reason, my mind which often times reverts to fantasy in lieu of reality, merged gaming and death and thus…Chronicles of Orian was born.

Bekka’s body is crippled by a disease, but in the game, she is whole again, but still has to find her voice and strength. How did you set about creating Bekka’s character?

Bekka created herself. I simply pictured a young patient in my mind and as amazing as it may be, she took a deep breath and exhaled. I saw her, but it was not just a vision…I felt her sorrow. She was commanding of attention and as strange as it may sound, I simply scribbled what was happening, her responses to the environment, her heart, her needs, her pain and above all else, her intense desire to love and be loved. She’s an incredible young woman and unto the end (book 3 in the trilogy) with only faith as her weapon she faces evilness even death, not only to forge her own destiny, but to protect those she loves. I so admire her.

What I enjoyed more than the deeply complex characters is the intricately woven plot with twists that I rarely saw coming. Did you plan the novel ahead of time or did the twists develop organically?

I do not use outlines. I simply sit at my computer…locked away from the world while the scenes play in my mind.

It seems like you had a lot of fun writing this book; did you?

I laughed and I cried but it was an incredible journey. I loved it and to be honest, I fell in love.

This is book one in the Chronicles of Orian series. Where does book 2 take readers?

Extolled, book two in the Chronicles of Orian trilogy is the continuing saga of Randar and Bekka who find themselves front and center as worlds collide, earth is ravaged by war and Orian is beleaguered by a humanoid race intent on world domination. Besieged by hated, lies, betrayal and grotesque horrors, battle lines are drawn and unexpectedly Bekka finds herself once more visited by her past…only this time her antiquated disease has an ugly twist, one that will affect not only her, but the daughter she lost so many years ago.

From the depths of blood and gore in a now seemingly doomed society, a forbidden love takes root. Audra, Bekka’s long lost daughter, now sixteen and incredibly naive, falls prey to a grotesque monster lurking behind the outrageously handsome face of a shape-shifting beast called Mardrid. Ordered to seduce her…or die, Mardrid finds himself helter-skelter for the very nearness of her warm, curvaceous body ignites such a dire and primal need to feed that maintaining his human persona is all but impossible. He quickly realizes he is playing a deadly game…one he may not win.

As secrets are revealed and truths are realized the drums of war echo throughout the land. Family turns against family, friends against friends and as the Scaff invasions and their insatiable lust for flesh intensifies, every faction in Orian is pushed to the brink of extinction. Few, if any, will survive and against all odds there will be blood…there will be sorrow…there will be gnashing of teeth.

Randar, who refuses to capitulate, gathers what’s left of the living outside of Uldrame for one last stand. With defeat, imminent and their backs to the wall, Randar gambles his life as well as those he loves on one last hope.

Can the heart of a naive young girl sway the face of death? Can Orian be saved…or is it already too late? 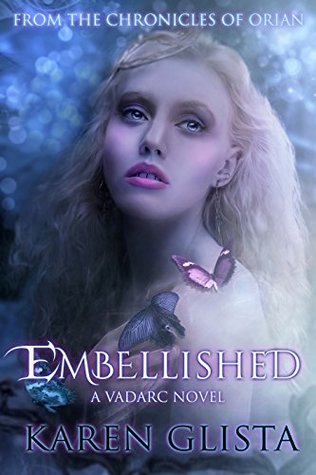 When hunky, eighteen-year-old Travis Kurth lures his sister Bekka to assist him and his friends in an online game, he has no idea that all their lives are about to change… forever. Ripped from reality by an elemental force of nature, the party of five soon wake in a beautiful, but dangerous, new world called Orian.

Bekka, who is suffering from a genetic disease, the same malady that killed their mother, finds herself in complete remission, but there’s little time to celebrate as one, then another of their party falls prey to this unforgiving land.

Rescued from death by a battalion of human soldiers under the leadership of Vallas Onisquase, Crown Prince of Adosarath, Bekka discovers that in Orian refuge comes at a steep price. The arrogant, dangerously handsome Vallas, beguiled by Bekka’s beauty, sets in motion a plan to make her his own, but the royal entourage falls under attack by a blood-thirsty humanoid faction called Vadarcs.

Abducted, Bekka finds herself deep in Vadarc territory with no chance of rescue. Leashed like an animal, abused, humiliated and placed on an auction block, she is purchased by blood and gold to become the property of Randar Ataurik, a humanoid, tusked, barbarian, Vadarc prince.

Vallas who is obsessed with his newly betrothed, demands her return but Randar, in the long held tradition of Vadarcs, has bound her by blood.

As the winds of war sweep the land, Bekka finds herself in a deadly triangle.

Embellished is the first book in an epic, paranormal romance.