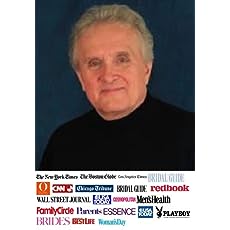 Worship of Hollow Gods is a provocative book that challenges the ‘hollow gods’ we worship. Why was this an important book for you to write?

Worship Of Hollow Gods was an important vehicle for Jim to continue to extricate himself from the “hollow gods” his family was immersed in.

You examine family, faith and the secrets we hold. What are some themes that were important for you to capture in this book?

Yes, the unquestioned soul-robbing hollow gods were family, alcohol, and the church.

I appreciated how you approached these sensitive topics. What do you hope readers take away from your book?

What we’ve seen over and over again is the reader leaving a review/telling us how this book helped them take a different look at the family “norms” they grew up with.

What are were some reader reactions that surprised you?

The only response that was surprising was the one star review on Amazon by someone who was impatient with all the descriptions and details and saw Jim’s character as “screwed up” blaming his parents and got bored. But, that’s not surprising from someone not interested in people’s internal lives. 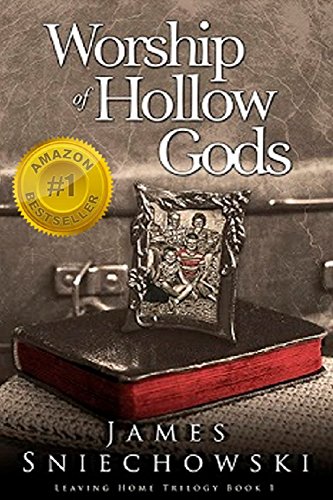 In Worship of Hollow Gods, James Sniechowski bears witness to the world of a sensitive, nine-year-old boy, subjected to the underbelly of his Polish Catholic family in working class Detroit. The year is 1950. The family gathers for a Friday night family poker/pinochle party. The outcome reveals a world no one ever talked about then and are forbidden to talk about now—the unspoken, the impermissible, the reality beneath every family’s practiced facade—and what lies beneath when the front has been ripped away.

I definitely wanted to carry over themes of parenting, or lack thereof. So much of mythology is deities behaving badly. and in Kronos we have the ultimate crappy parent. And how. But I also wanted to contrast that style of parenting with Rhea’s more maternal side. But other parent/ child relationships arise as well.

Additionally, I wanted to carry forward this idea of duality and that nothing is ever as simple as it appears to be initially. I wanted to confuse the readers’ loyalties a bit in that regard.

New ideas I wanted pursue were the ideas of justice and what that meant. And retribution versus restraint.

A race of giants attack the students and force them to flee while the giants grow stronger with every attack. What was the inspiration for this race of giants?

Zeus continues to be an intriguing character with multiple layers. What were some driving ideals behind his character development?

Firstly, thank you for that. I’m happy that he came out so well in your eyes. One thing I was very cognizant about was the perception of Zeus, the classic king of the pantheon. He doesn’t have the best reputation. Haha. I wanted to build a view toward more humble beginnings for him and show the natural teen angst, uncertainty, and discomfort with coming of age.

Where will book three in the Sky Throne series take readers and when will it be available?

Sadly, the third book in the series didn’t get picked up for publication. 😦

High atop Mount Olympus, as dawn breaks on a new academic term, normalcy returns to campus following a harrowing expedition into The Underworld to rescue kidnapped students.

Zeus and his fellow Olympians now prepare to testify in The High Court where Hyperion will be tried for the attack on Crete and death of Anytos and Kronos will stand trial for the murder of MO Prep’s Headmaster Ouranos.

As the trial draws near, the MO Prep students and faculty are besieged repeatedly by a race of gargantuan stone and earth giants. Under heavy assault, the Olympians are forced to flee to the volcanic island of Limnos to regroup. Meanwhile, a toxic poison Zeus has carried with him since a prior fight with a dragoness creeps toward his brain.

In a race against time and beasts, Zeus and his friends must find a way to survive not only the toxin ravaging Zeus’ body, but also the giants who grow stronger after every attack, and somehow make it to the The High Court alive.

The sequel to the wonderful debut series The Sky Throne, we find young Zeus struggling with forces from beyond Mount Olympus in The High Court. The book picks up after there has been a lull after the tumultuous events of the previous book, with Hyperion and Kronos both being tried for crimes and will be hopefully brought to justice soon. It is when these trials grow near that the school, which is already underway with a new semester, when giants attack and force the occupants to flee. Zeus in the meantime is poisoned and will have to find a cure, before he succumbs the toxin.

Ledbetter is not letting his heroes off easy in this next book and as is tradition with second books of a series, the stakes are even higher than before. It is clear that his style and refinement in the craft is better handled than in the previous book. The characterization of Zeus also seems to be maturing somewhat, which fits because the characters are getting slightly older as time on Olympus passes.

The world building of this series continues to amaze, since not since Percy Jackson has an author created such a self-contained world of mythology and used it to such effect. It would be derivative to compare it to the likes of Harry Potter or other classic series where the majority of action and story happens at a school, but Ledbetter uses this setting to his advantage at every turn.

The only true issues that come up in this book, is the pacing. It’s hard to say if this book is the middle book of trilogy or another episode of a series, since there are places where the plot kind of peters out. This is made up for the stylized action sequences, but it is still something to be wary of when moving forward through the narrative.

All in all, Ledbetter has written another great installment in his Greek mythology series and anyone who enjoys fantastical settings and compelling, fun characters would be remiss to skip this series. Looking forward to the next entry of The Sky Throne. 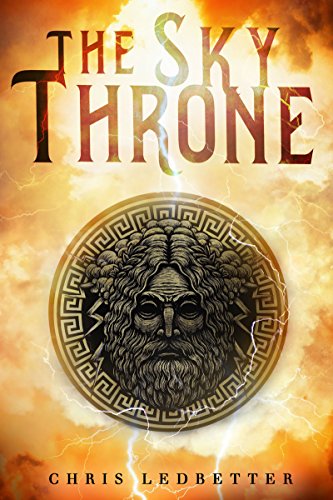 The Sky Throne, by Chris Ledbetter, is a tale set in Ancient Greece. Zeus, a youthful prankster, finds himself entangled in a conflict that reaches the slopes of Mount Olympus itself. Living a life as an unknown, Zeus’s world changes entirely with the violent attack by an Elder deity, Hyperion. Zeus, seeking an answer for this attack, finds himself at Mount Olympus Preparatory Academia. He finds sanctuary and a temporary reprieve from the sorrow that haunts him, but trouble still follows him. Students and faculty begin to vanish from Olympus, which leaves Zeus and his peers to solve the mystery.

Ledbetter takes the best pieces of contemporary YA and gives them their own mythological flare. The academia of Harry Potter becomes the independent schools of the Mediterranean and Aegean. The survival of The Hunger Games is embodied by Zeus’s ingenuity throughout the story. Even tones of Red Rising can be felt in the opening pages of the very humble beginnings of a character we have known about for thousands of years. The breadth of the world is very thorough, and will please any Grecophile. Ledbetter covers everything from Crete to Tartarus, and all that lies in between.

These very familiar characters from mythology are made a new by being “made young” and formed into literal student roles. The twist on these old figures was one of the reasons why I kept turning the page. This, and the mystery of Zeus’s parentage, kept me enthralled with the character; especially since Zeus is a character that not only grows and changes throughout the book, but becomes endeared to the reader. For example, he consistently struggles with how to flirt with girls!

The actual pacing itself is done quite well. Within the first dozen pages, the reader feels the very real consequences of violence and aggression and the plot only gathers speed from there. It especially begins to escalate when the real threat against Olympus Prep arises and Zeus begins to show the true core of his character, to the delight of the reader.

If anything negative can be said against the plot and world building of the book itself, I would say that Ledbetter’s technical skill could use a bit of Olympus grace. While reading, I found some of the sentences awkward, while others were quite unnecessary based on context. This forced me out of the story. Beyond that, I found the dialogue to be inconsistent along the lines of pushing melodrama or self-deprecating humor. This is not to disregard the appreciation I had for his presentation of different cultures that actually did have their own way of speaking.

All of this taken into account, the reader of YA literature will not be disappointed. Following in the footsteps of Rick Riordan, yet also striking out on his own when his path diverges, is not a feat to be taken lightly. Ledbetter achieves this with brilliant originality and a story uniquely his own.