103 Simple Poems From One Simple Person

With a collection of singular point of view narratives the author, Mayne Leitzer, offers his first complete book of poetry; 103 Simple Poems From One Simple Person. The book is sectioned into chapters outlining the types of poems that follow, what those writings mean to the author, and how they came to be. The title is indicative of the style of writing, not the writer, as the poetry is fairly simple; using straight forward thoughts and uncomplicated prose to reflect on life’s complications. The story arc is more of a summation of personal perspective and reflection than a journey forward or illustration of action.

In penning “103 Simple Poems” Mayne Leitzer offers up self reflection, self deprecation, a heavy dollop of fundamentalist religious dogma, and more than a little bit of sadness and remorse, with a glimmer of joy and hope.

Many of his poems are jargon one could find on a motivational poster or greeting card, but that is not at all bad. Life can get messy and sometimes people need soft, plushy words to find comfort and solace. The reader will find many situations that they can relate to; lost love, death, pursuing success, loneliness, finding your destiny, conflict of conviction, etc.

However, there are many poems that can be divisive. Sex before marriage, gun control, abortion, prayer in school, Heaven and Hell, those types of things. The thoughts Leitzer lays out are organic in nature and not derived of a need to be quoted for inspirational prose or to start a deep conversation, but rather, just as he states; a need to express his soul at different stages in life.

Some poems showcase the more complex layers of his humanity that struggle to shine under the dominance of a narrow vision.  The Promised Land poem is thoughtful and embraceable. Not a Bad Day and One Moonlit Night lets out his optimistic side which he admits is not in his nature. Leitzer is honest about his mistakes and his struggle with alcoholism. His love poems are truly good; especially Seasons, A Smile and Rock A-bye.

There are a few grammatical, punctuation and spelling errors, which are distracting as is his zealous religious fervor, but his writings let the reader feel his authenticity and the last few poems wrap up nicely to summarize his goal and wishes for success.

This book uses simple and fluid style to expand peoples emotional depths but seemed content to keep its voice generalized. The individual writings have value no matter your religious leanings. At the end the reader will come away with some reflections of their own and maybe, quote a few lines for their own stages of life.

Just Another Girl’s Story is a memoir about finding redemption. Why was this an important book for you to write?

This was an important book for me to write because far too many people let their past mistakes define who they are in the present. Too many people from all walks of life live with shame and guilt. Unfortunately for many, they exasperate their turmoil into further problems by not releasing their past. Such as addictions, severe depression and unhealthy relationships with others. I wrote my story to offer hope. I also wrote it to testify how my relationship with Jesus was the only way I could move on and find redemption.

This book recounts some harrowing events in your life, but the title of the book is Just Another Girl’s Story. Why did you choose this as the title?

I choose this title because of an experience I had when dining with friends. Shortly before publishing my book, I had quite a few titles I was kicking around. Then one evening I was out for dinner with five women, all of us are Catholic. I was asked about my upcoming book, and I revealed some of the content. Two of the women abruptly stated that they too had abortions. After I got home that evening, I pondered our discussion and realized that out of six women at our table, 1/2 of us had an abortion. I realized that I am “just another girl” that has experienced abortion; thus shame and guilt.

I appreciated how you were willing to tell both the good and bad aspects of your life choices. What was the hardest thing for you to write about?

My abortion experiences were the most difficult to write about. When I wrote the outline for my book; I did not know if I would be able to reach the level of detail I felt the reader would need to have to understand my journey. Most especially my abortion experiences. At first, I thought I needed to spend most of my time writing about when I was physically at Planned Parenthood. I even went to the Planned Parenthood in Milwaukee to ask for my records. When I was told they did not have them anymore (they only need to keep records for 7-10 years) – I was devasted. I didn’t write for a while after that day, as I believed I had to have those records to validate my experience. When I finally began writing again, I asked God to help me retrieve the details of what I needed to provide the reader an understanding of my experiences. As I began typing, it was as if God was at the keyboard typing the words as I relived those two days at Planned Parenthood. God gave me exactly what I needed, and I recalled many things I had buried long ago. I cried many tears as I re-read what was typed and I marveled once again at how God is so powerful and how I could not have written my story without Him by my side.

What is one thing that you hope readers take away from this book?

I hope and pray that readers suffering from shame and guilt; regardless of reasons – can find inspiration to reach forgiveness and redemption. I hope readers take away the adage that you do not have to let your past mistakes define who you become and how you live today. 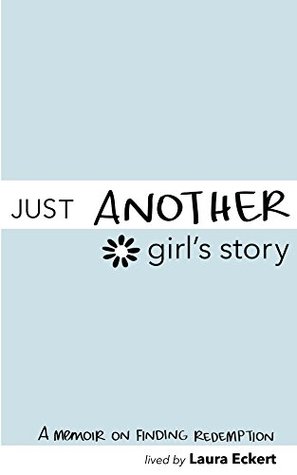 Laura confesses, “I was spending so much time grieving the loss of my two aborted babies; all the while taking for granted that God gave me two more that were alive and standing right in front of me”

At the tender and problematic ages of 16 and 17, Laura Eckert twice found herself as a patient at an abortion clinic, after her parents had discovered that she was pregnant. Addicted to sex and an overindulging in alcohol while maintaining an unhealthy desire for isolation and coping with deep depression, Laura didn’t understand the link between her problems until she was in her thirties, when she was finally able to accept them for what they were. Then, her pursuit of redemption for what she did became relentless, as she tackled the dark humiliation she had endured, eventually finding peace within a loving family of her own.

Now, in her book, Just Another Girl’s Story, Laura relives those traumatic teenage experiences in an honest and genuine teen autobiography that many will find shocking, harrowing and provocative, and yet implores sympathy and holds the reader spellbound at the same time. Read about her plight and her path to finding the peace and healing that she craved, as she tackles controversial topics of teen abortion, teen pregnancy, teen drinking and alcoholism and sex addiction.
Perhaps you will be inspired to find your own peace within Laura’s story.

Everyone must face their individual journey of life alone no matter the support system, or lack thereof. We have the opportunity to continue improving ourselves for a better future surrounded with love and happiness, even if many take what they currently possess for granted. In Just Another Girl’s Story, author Laura Eckert allows her readers to follow her as she goes through her ups and downs of life in her perspective. There are many things she’s experienced that could make someone judge, but the point of her sharing her life is what many can use as a testimony that life can get better. Through her eyes, we gain the understanding that we should not let our decisions define who we are destined to become. The most challenging part is embracing flaws, accepting the consequences, and learning from them.

There were plenty of emotions invoked through Laura’s writing style. While reading, there were times that had me shaking my head in bewilderment because of instances when she knew she was doing something wrong, yet continued doing so. One thing that stood out despite all of the obstacles occurring in her life, is maintaining her relationship with God, that shows pure dedication. She did her absolute best at staying true to her faith even after moments she wanted to throw in the towel. Laura’s story is inspirational to everyone, especially women. It’s a story that shows you that it is okay not to be perfect, as long as you want to be a better version of you.

I understood how she felt, although I don’t fully understand her reasoning to make certain decisions. I know that the heart cannot help who it loves and sometimes you just have to respect that as the case. It’s amazing to learn about everything she’s been through from a young age to continue going despite her odds. The wonderful experiences led to her having a beautiful family that is centered around God, full of more happiness than frowns, and built on a sturdy foundation. I truly enjoyed reading this book and seeing the life that this woman had, it inspires me to keep reaching for a better life for myself. I highly recommend this book to everyone, it’s a great story that could be relatable to most people in the world who are going through a rough patch, to know that in time it will get better.