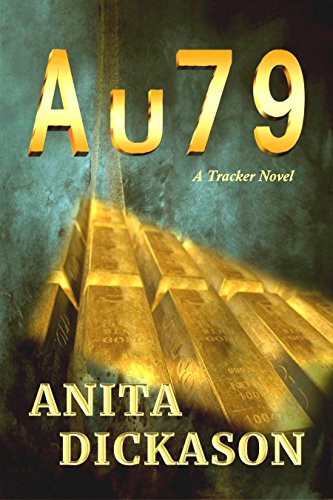 Stuart Dyson of the Laredo ATF is missing, and his girlfriend, Tracy, an officer with the Laredo police department, just may know more than she is willing to share with the men and women dedicated to finding Stuart. When the FBI Trackers are assigned Stuart’s case, Tracy cooperates while running her own investigation on the side. The Trackers are a specialized unit within in the FBI and have a stunning track record of successes. They are Stuart’s best hope, but they can barely do their job for keeping Tracy in check. When the entire investigation hinges on determining the significance of a note scrap reading “27.43 pounds”, the Trackers find themselves fighting against the clock to rescue not only Stuart but Tracy as well.

Anita Dickason’s A u 7 9 is a unique brand of thriller. The FBI Trackers embody all of the mind-blowing aspects of the FBI, and Nicki Allison stands out among the members of the team. Her dedication to each investigation knows no boundaries, including sleep. Dickason paints a vivid picture of Nicki as she manipulates her way through staggering amounts of data to pinpoint needed evidence. She is a character to be admired.

Eddie Owens, the young reporter receiving anonymous tips as to Stuart’s possible involvement in his own disappearance, plays a key role throughout the book. Not one of the characters readers might put a lot of stock in at the outset of the book, Eddie becomes more and more colorful as the chapters pass. Eddie easily stands as my favorite character from A u 7 9.

I appreciate the way Dickason stretches out each discovery and keeps readers guessing regarding the meaning of the “27.43 pounds.” As each character ponders the meaning and subsequent research is conducted by the Trackers, the reader becomes increasingly invested in finding out how something so seemingly insignificant could impact Stuart and the fight to find him before his time runs out.

I am not sure I can remember the last thriller I read that has such a satisfying way of slowly revealing the connection between the title and the book’s plot. I kept trying to guess the significance of A u 7 9 to the sequence of events and was pleasantly surprised at the ultimate reveal. Dickason pulls together the plot and title in a unique and refreshing way.

Dickason’s writing is engaging to say the least. Many times, books of this genre can be heavy on narrative. Dickason, however, provides the perfect blend of dialogue and narrative adding to the overall depth of her characters.

As far as crime thrillers go, Dickason has hit it out of the park. The team of Trackers who serve as her main characters do not disappoint, consistently provide suspense, drama, and humor. Any fan of crime dramas/mysteries will be drawn to both the writing style and the engaging plot of A u 7 9. Dickason’s own background in law enforcement plays heavily into her writing and makes for a book no fan of crime thrillers will be able to forget.

A wave of crime grasped center stage at the beginning of the volcanic summer. The often abused by police, misused by society, shunned, and stereotyped patrons of the “hood” decided that their reparations would no longer be paid by the normal “Smash and grab”. Gun laws had changed. Stiffer penalties and mandatory time was a constant reminder whenever, The Felony Lane Gang clocked in. Blue collar crime was now at an all time low. White collar crime was their new way of life. Three siblings stormed into a world of destruction when the youngest known as Crackaboi decided to part ways with his modest upbringing. For the love of her baby brother Glory unknowingly stepped into a web of drugs and exotic entertainment. Tjohnnie, the oldest and the coldest felt a need to protect his siblings. After losing their parents to unfortunate circumstances, TJohnnie secretly led two lives. A college football player by day. A counterfeiter and money launderer for the Infamous Seminole Indian Tribe by night. Tired of the gruesome torture for hire jobs, Crackaboi teams up with a longtime friend and brutal killer Lil Turk. Together they mastermind the greatest heist in United States history. Surpassing Al Capone and Jon Gotti, the ruthless duo targeted every financial institution that was federally insured. Their lavish lifestyle enticed other potential members. Dodging the Feds, ducking the local authorities and slaughtering anyone who wandered down their path, they notoriously became known as, ” The Felony Lane Gang”. With crooked cops on their trail, the street rogues decide to take on one last heist. Crackaboi and Lil Turk burglarize a  century  old abandoned warehouse, in search of a quarter of million dollars supposedly stashed inside an old safe. They embark on a journey that leads to their beloved Glory, on life support fighting to stay alive. A bloody street-war against the Mexican Cartel Assassins and a trail of bodies that lead down a sea of destruction. With ties to the Illuminati and a billionaire oil tycoon, the double steel door safe tightly held secrets that would send chills through a psychopath’s spine. 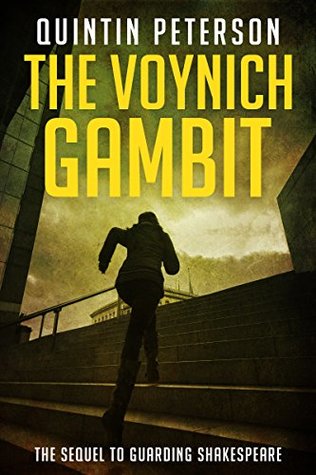 Author Quintin Peterson returns from Guarding Shakespeare with his next enthralling piece of crime heist fiction, The Voynich Gambit. The cunning mind of Special Police Officer Lt. Norman Blalock is put to the test when a slew of D.C.’s most infamous artifact dealers set their sights on a mysterious treasure of immense value, the Voynich Manuscript. Blalock must outwit and outmaneuver enemies from all angles in this gripping noir tale of mystery, motive, and deceit. True to style, Peterson beautifully weaves the rich history of The Folger Shakespeare Library and the manuscript into the gritty drive of its ruthless pursuers. The Voynich Gambit is an epic tale of cat-and-mouse, arguably fit for a play by the Bard himself.

The novel is set in a bustling modern day D.C., a mecca of polished skyscrapers, historic landmarks, and endless traffic. Peterson’s vivid imagery is infused throughout the novel, generously describing the luxury of these looming buildings. At the Folger Shakespeare Library in downtown, Lieutenaunt Norman Blalock has been working as a security guard for over two decades, protecting its treasures from the likes of handsy museum-goers and would-be theives alike. His seasoned tenure makes him a trusted employee to the security staff, but it also makes him an invaluable asset to Rupert Whyte, an aristocratic con-artist who is scheming up a heist fit for the history books. Whyte reads from the pages like a regular King Pin – a ruthless blueblood brimming with determination for ill-gotten gains. When he requests that Blalock palm the Voynich Manuscript, an ancient archive of medical knowledge, Blalock must decide where his true loyalties lie – in riches or in righteousness. This is a conflict as old as time, weighing greed against integrity, and Norman is no exception to this struggle.

To complicate matters even more, the buxom beauty Kavitha Netram has arrived at Blalock’s door, suitcase in hand. Kavitha certainly has the looks to be a trophy wife, but Norman must trust his instinct that she’s here for much more than just a cuddle buddy. As their relationship begins to develop, author Peterson injects a modest amount of cheeky pop culture into the mix, noting some current brands along with a famous U2 song. These moments of reference feel quirky and endearing, and offer a refreshing change of tone from the steep historical passages. Don’t be surprised to find yourself absent-mindedly humming along to “With or Without You” as you read along.

As it becomes obvious to Norman that Rupert Whyte isn’t the only artifact dealer dipping his hands into the cookie jar, he must strive to stay two steps ahead of this dangerous game of fidelity and fortune. Peterson’s quick writing style will keep you engaged, even through the varying pace of lavish history and casual conversation. Peterson writes confidently, and it’s admittedly impressive how far his knowledge seems to spread. Art, history, crime, action, and romance – The Voynich Gambit honestly has it all. I would heartily recommend it to any fellow lovers of the noir style.